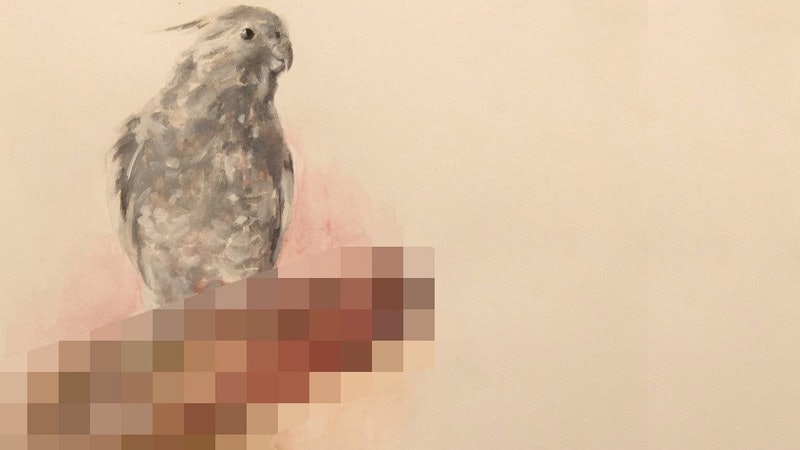 You know what's the worst? Trying to find a gift for the friend who already "has it all". There you are, staring at a beautiful art print of a wild bird, thinking for the hundredth time, "Ugh, I would totally get this for her, but it's just missing something." Fret no more, because the conundrum has finally been solved by Etsy artist Brittany Zagoria, who paints birds on top of dicks. Now you'll never have to worry about what to get for your co-worker's baby shower again!

OK, so I spent an entire paragraph pretending that was normal, but that's about as far as I can get. She is PAINTING BIRDS ON DICKS, guys, and what's even weirder than that is they are bizarrely beautiful. (I love the peen, but come on, "beautiful" is not exactly the most aptly-applied description.) Brittany, who is based in California, has some serious art chops to back her up, too. She majored in painting and drawing at the Art Institute of Chicago and graduated with her BFA in 2011, and has been using all the spare hours she isn't teaching to keep up with her talent. If someone in the world has to fill the painting-birds-on-dicks niche that was missing from modern day America, then I'm glad it was her.

The inspiration for the birds came from both heartfelt and semi-alarming places. Brittany said in an interview with Daily Dot she is obsessed with birds, and aspires not just to draw them, but eventually become a veterinarian specializing in avian medicine. As for the bird dick paintings themselves?

"I have a cockatiel named Stella, and when my fiancé and I started going out, Stella was not happy about having another person in the picture. So as a joke, I’d perch her on his penis. They were both totally miserable about it, but I thought it was hilarious," she explains. "I was part of a studio show where the theme was animals, so I decided to paint Stella on his penis for that show. People thought it was really funny, and I sold a few prints of that, so I decided to do more."

Moment of silence for Zagoria's fiancé's disco stick, everyone.

She also explained that drawing the birds is much harder than drawing the penises, because of the detail she puts into the feathers and the reference models she has to use for the different types of birds. (Penises, I guess, are less unique than different bird species.)

Beyond painting birds on dicks, Brittany explores portraiture and scenes in nature. She says she wasn't expecting this one-time joke to pick up speed or gain popularity so fast, but since she debuted the first one in an art show, her paintings have been in steady demand ever since.

You can see the uncensored version and buy your own revolutionary bird-dick painting on Etsy by visiting her shop. They run at about $250 per pop (they're giclee prints), so if you're strapped for cash and still want to get something for your friend with some classy penises on it, never fear. Here are a few more dick gifts you can surprise and delight your friends with:

And don't forget the gift wrap!!

There. Now you're all dicked out for your next party, and I just spared you the embarrassment of having "dick presents" pop up on your old searches the next time your boss hovers over your shoulder at work.