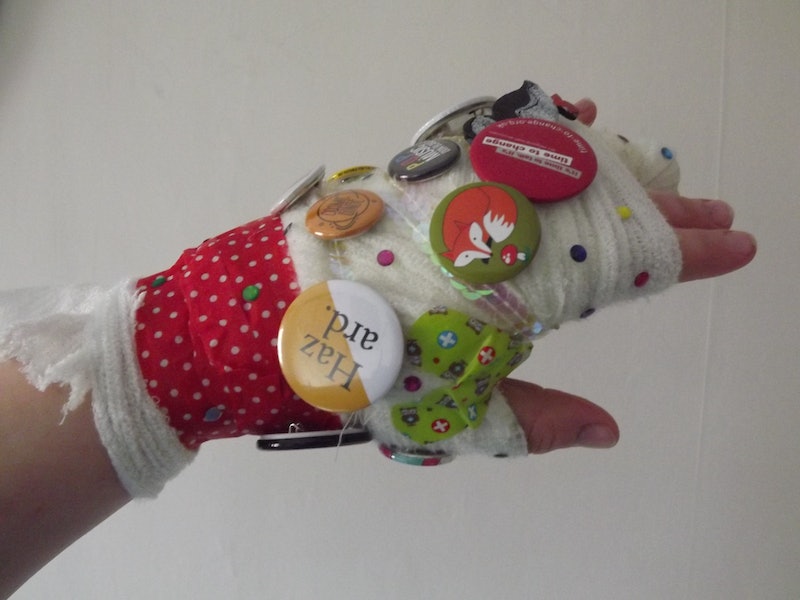 This week, I was unfortunate and clumsy enough to spill a whole pot of tea over my entire hand, warranting a bit of a cry and a quick trip to the hospital. As a result, I now have to wear an incredibly stylish bandage for the next couple of days. As soon as I left the hospital, I turned the corner onto one of the main streets in my town to hear a man announce, "Ooh, sore hand!" as I walked by. Thanks for noticing. Obviously I'm grateful not to have experienced any life-threatening injuries in my life (and can deal with a scalded hand), but wearing a cartoon bandage on your hand does make you a bit self-conscious. That's why I have decided to take a leaf out of the Jackie Hagan school of thought and "throw some glitter at it."

Jackie Hagan is an inspirational performer who had to go through the terrible ordeal of losing her leg, but talks warmly and humorously about it in her show Some People Have Too Many Legs. I am in no way comparing my minor injury to a traumatic amputation, but I do think her "throw some glitter at it" approach is applicable to everyone — be it through a prosthetic limb, a bandage, or just a little something you're self-conscious about. As Hagan declares in her show (and on her Facebook page):

"Jarvis Cocker was a man in the 90s who was too tall, too gangly and too odd to be a front man of a band. So... he wore shoes to make him taller, clothes to make him ganglier, and acted odder, and he became a sex symbol, and that's when I realized that if you have something in you you're embarrassed about, if you try to hide it it makes your body cringe, but if you work it — if you show the world you're into your own gangliness or your own fat bum or your own false leg, then it works."

So in a little nod to the marvellous Jackie Hagan and her fabulously decorated prosthetic, here's what I did to bling up my bandage:

Oh, that corner looks like it might unravel a bit — let's stick it down with these owl bandaids I just happen to have!

That dressing tape the nurse used is pretty ugly. Let's get that covered with polka dots straight away.

Now, this was where it started to get exciting for me. I love badges and pins! Ever since high school, when I started pinning them on my tie and backpack, I have always had a thing for button badges. My bandage was starting to look oddly punk.

I studied Embroidery at university so it seemed only right to have some on here. This little parrot patch was left over from a previous project, so I just roughly stitched around the edges and, voila — a parrot in my palm!

You've got to have a bit of sparkle. This sequin ribbon was nice and easy to secure, having previously put so many pin badges on.

Whilst I'm pretty sure these stick-on glitter dots will be continually shedding for the next 48 hours, I think they finish off the piece nicely.

I fully expect that people are going to look at my bandage now. I mean, they were doing that anyway — but at least now it will be because it looks so damn cool. If I'm going to have to wear this thing for the next few days, I may as well rock it and make it an extension of my outfit. Speaking of which, I'm off to a punk gig tonight. I hope they have badges on the merch stall.

Please note: Decorating your dressings is in no way medically recommended! So consult your doctor or nurse before decorating your own!

More like this
Instagram & Facebook May Finally Lift Their Notorious Nudity Ban
By Allie Fasanella
Selena Gomez Dismissed Trolls' Comments About Her Body After The Golden Globes
By Stephanie Topacio Long
Phoebe Dynevor Serves ‘Bridgerton’ Underboob In Stunning Floral Gown
By El Hunt
The Biggest Fashion Moments Of Paris Couture Week 2023
By Dominique Norman
Get Even More From Bustle — Sign Up For The Newsletter
From hair trends to relationship advice, our daily newsletter has everything you need to sound like a person who’s on TikTok, even if you aren’t.