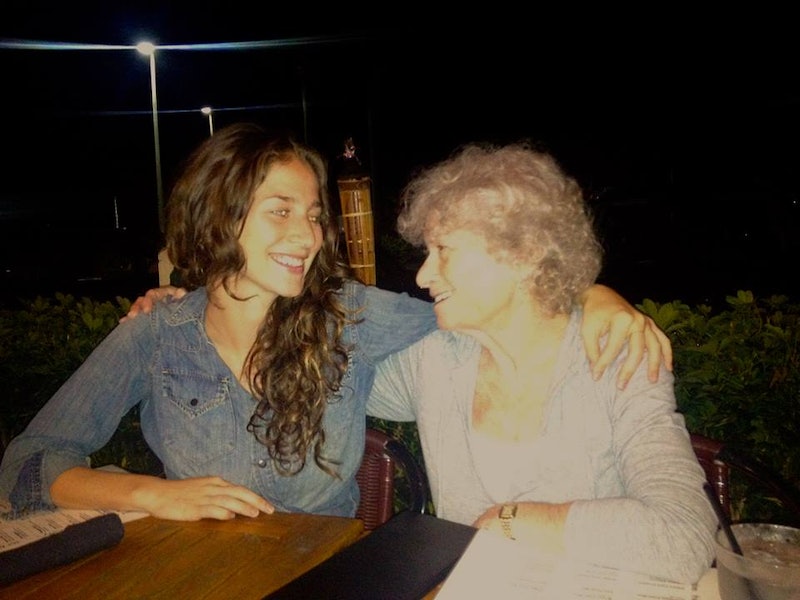 My grandma is 100 years old. Her favorite stories involve talking about how she made $7 per week at a garment factory and how a pig once ate her only doll, Jo Buster. Bless her heart, but I don't think she'd be the best wingwoman (although that Jo Buster story really is a crowd pleaser). But Kayli Stollak's grandma is a little different. So when Stollak decided to try online dating, she turned to her granny for advice — and convinced her 77-year-old grandmother Gail to try online dating, too. This led to a blog, a book and a glimpse of how we may have much more in common with our grandmas than we think.

In a New York Daily News profile, Stollak, whose book Granny Is My Wingman comes out today, talks about the dating advice she gave to and received from her grandma. As the 77 year old was navigating JDate in West Palm Beach, 26-year-old Stollak was going on a lot of bad dates in New York City.

Before they hit the Web, both Stollak and Gail were hung up on past loves. [...] Coming off a long-term relationship, Stollak wanted to get over her ex but also felt she needed “practice dating.”

“What do you say on a first date? Where do you go? How do you act?” she wondered.

That’s where grandma came in.

“Kayli, I felt, should be going out,” says Gail, who agreed to this interview on the condition we withheld her last name to protect her status at a part-time job. “Just go out and have fun, Kayli! That was what I kept telling her."

“In the process of me trying to convince her, she said, ‘Okay, but you do it too,’” Gail says. “So I would do it on my level, she would do it on her level. And we’d talk about it.”

So that's adorable, but I'm much more interested in the saucy details of Gail's romantic past. The Daily News profile mentions like it's no big thing that Gail had an affair with her husband's co-worker that lasted nearly the entirety of her marriage and beyond.

She dated her ex-husband for only five weeks before tying the knot at 19 in 1954. Six weeks later, she was pregnant, and two years after that her husband admitted cheating on her. Then her hubby’s co-worker caught her eye across the table at a dinner. It sparked an affair that lasted the rest of her marriage, through her divorce in her early 40s and beyond.“We were always close, but I didn’t know as many details about her past,” Stollak says.

And Gail says it was about time to open up about the good stuff.

[...] When the online dating experiment began, she was still emotionally hung up on the married man and had even called him recently.

Is anyone else starting to think maybe Stollak shouldn't be taking relationship advice from Granny?

Apparently Grandma Gail's stories, openness and humor are big part of the appeal of Granny Is My Wingman, at least in its blog incarnation. Here's a snippet from a 2012 blog post:

When I told Granny about the poet’s ”self-published” book of poetry, she couldn’t hold back her fangs. “Whaaaat!” she exclaimed. “So in other words, it’s a non-happening.” Granny has one setting: real. The lady can’t help but keep it real.

In a 2011 Oprah magazine interview, Gails said the biggest turn-off for her is a show-off.

"He is dead wrong if he thinks I care about the kitschy list of homes he owns," she says. But a cheap man doesn't do it for her either: "A few months ago I was set up with an old fart who didn't want to pick me up because of the price of gas. Then he wanted to meet me at a quarter to six so we could make the early bird special," Granny says, "When I ordered a second glass of wine he looked at me and asked, 'Are you sure?' I was positive."

In a book excerpt, Stollak calls her grandma "part Larry David, part Joan Rivers. She’s not the sweet-talking, cookie-baking, crocheting type. She’s a s**t-talking, straight-shooting, adventure-seeking, gossipy yenta." Both grandma and granddaughter are still dating but not online, they say.

More like this
10 Ways To Be More Empathetic To Your Partner
By Raven Ishak and Lexi Inks
Are Quality Time & Gift-Receiving Love Languages Compatible?
By Lexi Inks
Think Your Partner Is Cheating? These Tarot Cards May Confirm Your Suspicions
By Kristine Fellizar
The Differences Between Polyamory & Open Relationships
By Lexi Inks
Get Even More From Bustle — Sign Up For The Newsletter