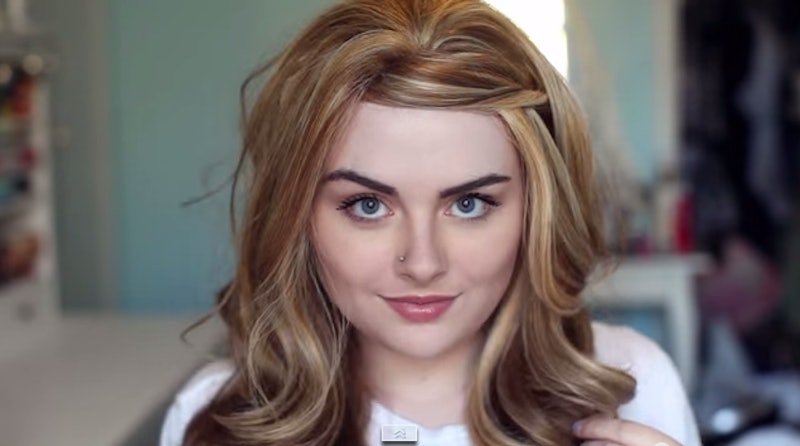 If you're bisexual, chances are you've encountered all sorts of stereotypes since you've come out: being called a home-wrecker, receiving an endless stream of invitations to threesomes from virtual strangers, getting pressured to "pick a side," and many, many other offenses, are par for the course when you're openly bi these days. Dismissed by straight and LGBT communities alike, we rarely get as much attention as other marginalized groups, which is part of what makes Amy Geliebter's "Bisexual Makeup Tutorial" so amazing. Also, her flawless makeup application doesn't really hurt either. The makeup parody video isn't exactly a new concept, but it's a surprisingly great format for talking about current societal issues. Remember the success of Megan MacKay's "Ray Rice Inspired Makeup Tutorial," which tackled the sensitive subject of Rice's allegations of domestic abuse last year? Geliebter's video takes a similar angle, using makeup tips to hilariously parody the stereotypes bisexuals face every day, Cosmopolitan reports. Geliebter starts with a clean face to mimic our lives "before homophobia and societal gender norms are shoved down our throats," followed by a "nice, thick coat of heteronormativity [and] straight-passing privilege." Things only get more hilarious from there, as you're instructed to make your blemishes "as invisible as the bi community" and apply eyeshadow that enhances your eyes to "better... ruin the relationships of both straight and lesbian couples." I don't know whether to laugh or cry, so I'm going to go with both.

<img alt="crying animated GIF " src="http://media.giphy.com/media/oOX5qIDkzDjeo/giphy.gif" class="article-body-image"/>Geliebter even took on Orange Is the New Black , the Emmy-nominated series sacred among the LGBT community for its portrayal of multiple lesbian characters (gasp!), "where the main character is bisexual, but the word bisexual is never actually used." That takes some serious ovaries.Geliebter told BuzzFeed that she chose to do the makeup tutorial after becoming frustrated with the treatment (or invisibility) of bisexuals today. "I realized that I had a lot I wanted to get off my chest about bisexuality," she said. Like many people who identify as bisexual, she remembered being attracted to boys and girls even when she was a child, but told BuzzFeed that "every time I confided in someone, I was told that I was confused or simply going through a phase." It's a familiar story, made worse by the fact that it's so common. Even in environments that are accepting of the lesbian and gay community, there's something about being attracted to more than one gender that seems to anger and confuse people, hence the "greedy, sexually promiscuous bisexual" stereotype.

<img alt="movie animated GIF " src="http://media.giphy.com/media/d6Ni9aqSatPfq/giphy.gif" class="article-body-image"/>Geliebter manages to be hilarious while skewering issues surrounding bisexuality today, which is pretty much everything I've been waiting for since I came out. Check out the video below:

More like this
The 19 Best Tweets & Memes About Bisexual Awareness Week
By Lexi Inks
An Honest Review of MeUndies Boxers, According To A Non-Binary Person
By Megan Lasher
Pro Footballer Zander Murray Is "Blown Away" By Support After Coming Out
By Sam Ramsden
Androgynous Formal Wear That Will Make You Feel *So* Fancy
By Megan Lasher
Get Even More From Bustle — Sign Up For The Newsletter