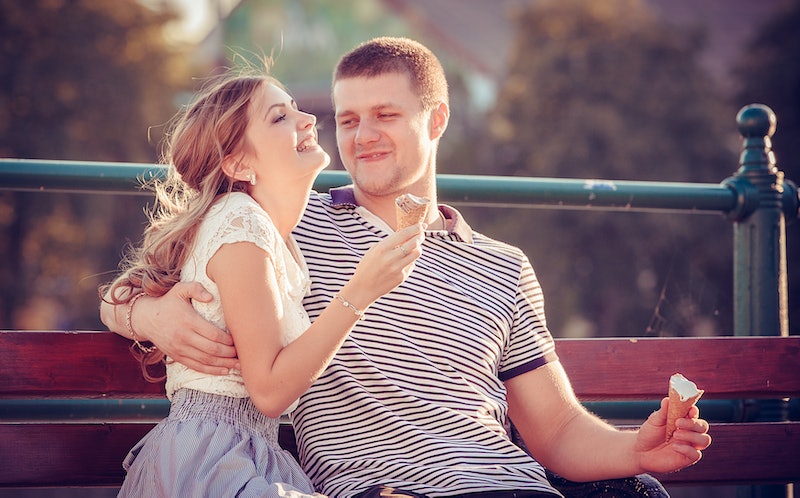 Let's stop kidding ourselves: No one is ever their completely, unfiltered, honest selves on a first (or 5th) date. First dates are an elaborate advertising ploy (peddling you as a viable sex or relationship partner) disguised as an alcohol- or caffeine-fueled meet-and-greet. Like all great advertisements, as many of us have already suspected, first dates present the product (aka, you as a person) in soft focus, blurring the potentially undesirable edges or red-flag-raising background matter. The little adjustments, amendments and omissions you make to yourself and your life on first dates ends up being something like Photoshop for your personality. I wouldn't say it's a substantial edit of The Real You, but it certainly presents your best self you probably wish you were all the time. Honestly, do you know anyone who can stomach Spanx and refraining from burping in public all the time?

We wear cute underwear (just in case), shave our legs (if shaving our legs is something we do, and we're feeling especially hopeful about the person we're going out with), and do our best to keep our elbows off the table (unless the table is a sticky bar, in which case, it's important to come off as chill and lean with generous zeal because that's just the laid back royalty you are). It's all a bit of a rouse, but like...so what? Everyone knows that everyone is mostly pretending to be better than they are on a first date, so a mutually agreed upon farce isn't really a "lie", right? If the first date turns into a second, fifth, or a 39th, that person will learn over time that burps happen and you actually hate camping. And hopefully they'll like you still, regardless of all that, because what are they? Some perfect human? Doubtful. They're almost definitely putting on a little show for you, too. Here's a quick guide for decoding various first date white lies and their true meanings:

I went out with this dashing, young indie publishing dude and as soon as he expressed distain for his roommates' The Wire habit, I absorbed the cue into my dating lie lexicon. "They call each episode a sode and it bums me out," he said. "YES I KNOW WHAT YOU MEAN," I lied, nodding and waving over two more neat whiskies. I realized in that moment that, to him and to many daters out there, revealing any interest in television suggests an overall slothdom and disinterest in real culture (like indie publishing houses). So I limited New Girl references from then on out and lemme tell you, it was not easy.

I was, however, very careful to explain my abstinence from "TV" or "television" only, justifying it in my brain because I don't own a television. But I do own a computer (that's what I type on) and use it to watch a massive amount of sodes on it. I know I'm not alone here, guys.

"I do yoga every morning at six. I mean, that's when I'm not doing a five-mile run."

This, like the TV thing, gives the illusion of firmness. You know, to distract from your true blob nature. No one needs to know your gym membership lapsed four months ago...at least not right away.

"Sometimes I run for a half-mile and would go further but I don't wanna be even more late for work."

Waking up is hard, y'know? So is physical movement with any regularity.

"I'm definitely over my ex."

This is probably a good lie to tell even yourself. If for no other reason than maybe eventually then you will believe it (if you don't already)?

"We broke up but I still feel free, if not unavoidably compelled, to check in on their social media regularly. Also, I feel a bit like barfing when I run into them unexpectedly!"

"Ugh, I LOVE camping. It really centers me."

Adventure is a good look, especially when it's a cheap- to free-adventure that doubles as a scheme to get in touch with nature.

"Bugs are horrifying, I'm scared of wild animals, and if you make me pee behind a tree, I will punish you in some subtle yet lasting way."

There is no wifi out there, guys. Surely you knew that...?

It's polite and might make them talk more so you don't have to waste mental energy drumming up additional content.

Or else "I'm going to Google them later if I decide I like you and then listen to their entire catalog on Spotify!" Real talk: I am probably gonna know that band and judge you heavily one way or the other by your referencing them. ¯\_(ツ)_/¯

"I usually don't have this much wine on a weeknight!"

Usually chirped while touching up lip gloss to prevent purple mouth—a tip you definitely didn't pick up through shameful experience. Nope, not at all. Not you.

"Don't look in my recycling bin."

So what? Didn't they decide wine was heart-healthy again?

"I'm actually not super hungry. I had a late lunch."

Because you were so held up with work and business and water cooler chatter, right?

"I don't want to have an uncomfortable food baby if we make out later, but trust that I have a nightcap on the books with two Amy's burritos later. They're waiting in my freezing right now."

Hello? Food is best enjoyed when eaten with wild abandon and only the judgement of your cat or already jaded roommates. No date is complete until you come home and eat some Night Cheese™ about it.

"I tend to keep really busy."

True, everyone has a decorated calendar in some way (no, really—try glitter crayons!), but if you really wanna do something, you find time. There is no way your week is mapped out to full capacity with zero wiggle room.

"I can't tell if I want to go out with you again so this is my way of being polite about future declines now."

The seeds of the best excuses are planted early, friends. Plus, really—our stupid brains are wired to find unattainable people even sexier. This is always a good defense to keep in your pocket.

"Haha, of course I don't believe in ghosts." (Or, nothing, because this shouldn't come up.)

As previously discussed, don't mention ghosts unless you decide swift escape is necessary.

"I think a ghost lives in my bathroom and sometimes when I think about this at night, I actually cannot sleep without A Bug's Life on loop."

I mean, I did end up moving but...ugh, maybe I should quit dating.

"I almost always do my own cooking. Sometimes I'll go out to eat for a special treat."

You have seriously read some CSA literature. But when you actually signed up, you ran 80 percent of the loot through your juicer just before it turned non-usable.

"I understand how water boils and have at least two main dish recipes under my belt to fool family and friends."

Hummus and corn chips is a legit dinner option if I say so.

"I have a cat, but it was a rescue. I never really considered myself a "cat person" before that."

Perhaps you got it from the sketchy lady from Craigslist who assured it was a Maine Coon but was easily talked down from $150 to $30 for an adoption fee.

"I have a cat and I am obsessed with it and I will probably never love you as much as I love it. I regularly re-write popular rap songs to include references to my cat. I perform them at home frequently."

Shout-out to my neighbors: I'm sorry.

"I had a great time. Let's do this again soon."

Well, the hummus was pretty decent with toasted pita, as a nice change of pace.

"You're OK, I guess, but I have no strong feelings to ever see you again."

"I'm all the way in love with you and if I don't hear from you in the next 12 hours, I'm going to start coming completely unhinged and have to pretend like I'm not so please god, just text me soon to hang out again before I have to cut bangs."

Plus, those burritos are freezing without you! It's a rescue mission, TBH.

Questionable corn chip fascination and all! But like, really—try not to talk about ghosts unless you have to.

More like this
Why A Libra & Libra Couple Might Become Codependent
By Kristine Fellizar
Breeding Kinks Have Been On The Rise Since Roe V. Wade Got Overturned
By Lexi Inks
Are Quality Time & Gift-Receiving Love Languages Compatible?
By Lexi Inks
The 19 Best Tweets & Memes About Bisexual Awareness Week
By Lexi Inks
Get Even More From Bustle — Sign Up For The Newsletter