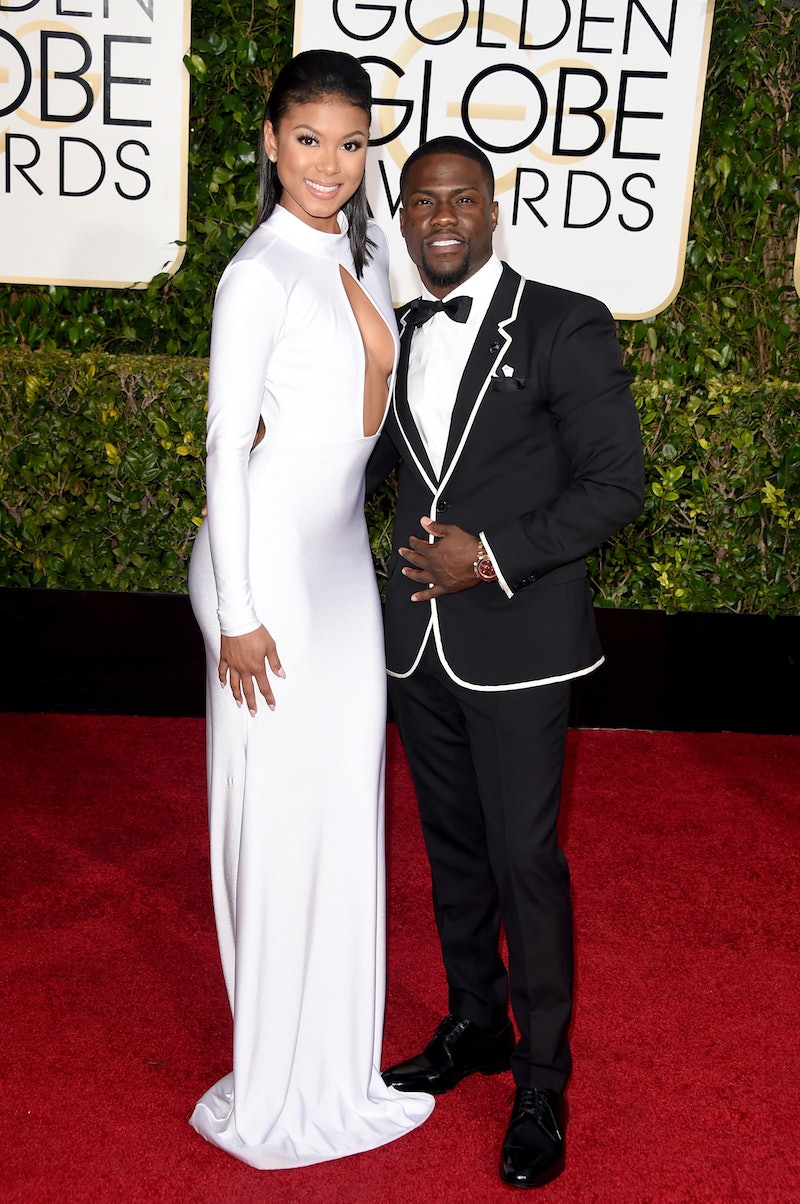 Many years ago, before I fell in love with a short guy, I was one of the many American women who only had eyes for the tall ones. I'm sure you're familiar with the situation — I salivated over any dude who was over six feet, even though, at 5' 2", being with a tall guy just meant that trying to kiss each other while standing up was not unlike trying to parallel park a compact car. But I believed the tall guy hype anyway.

And I was far from the only woman who found herself drawn to tall dudes for reasons she never quite thought through. A 2012 survey of college students found that 89 percent of women were only interested in partners taller than them (while 47 percent of men were open to dating a woman who was taller them). 48 percent of women dating online are only interested in men who are taller than them, and a study of online dating in the New York City area found that men who fell below the average American male height of 5'9" typically had a less than five percent chance of having women reach out to them. The man is the shorter partner in only four percent of heterosexual pairings.

Why? If you ask any height-obsessed woman — or me, a decade ago — they'll probably feed you some line about a tall man making them feel "safe" or "tiny." But let's unpack that for a second. What are we saying when we say we want a big man to make us feel tiny? Are we saying that we believe that it's sexually ideal that women take up as little space as possible, that we're at our most attractive when we look itty bitty compared to our male partner? You don't need a women's studies degree to know that that's whack. Also, I have a women's studies degree and I say it's whack. Being obsessed with men's height — in a way that you'd never obsess about any other one of their qualities — is bad for women, bad for dating, and reinforces a society that says physical traits we can't control are more important than who we really are or what we achieve.

As someone who falls two inches short of the average female height, I never even thought that dating a guy my height was an option worth thinking about. But I'm glad I did. Today, I'm about to celebrate my fifth anniversary with a wonderful dude who is roughly my height, and I would like you to know that height ain't nothing but a number. But if you need more convincing, please read on for 11 reasons to consider letting a short dude into your life/heart/vagina.

(And yes, all of the GIFS below feature male celebrities who are 5'8" or shorter. Free your minds, people!)

You'll never again have to engage in that weird orchestrated moment of stretching and bending, where you can't really enjoy the kiss because you're on your tiptoes and your super-tall dude is hunched over at a weird angle, and everyone involved is about to develop a hernia. When you date a guy who's around the same height as you, a kiss can just be a kiss, no step stools or pulley systems required.

I had a long relationship with a dude who was 6'2" — a whole foot taller than me. When we stood side-by-side, his penis was about even with my abdomen, which made sex exactly as awkward as you'd imagine. Trying to reconcile height disparities while boning involved a lot of crouching on unstable structures made out of stacked pillows and crawling around on tables, trying to use my D+ in high school Geometry to make all the angles line up. With a short dude, there's no problem — all your parts align, and you're free to get creative, instead of spending all your time just trying to get your genitals on the same visual plane.

3. There is no correlation between height and penis size

Seriously. Trust me. Or don't! Trust this 1993 study, published in the way-too-entertaingly-titled Annals of Sex Research, which found that there was basically no connection between height and penis size. But also, seriously, trust me. No connection at all.

A recent study published in The Journal of Sexual Medicine found that guys under 5'9" had sex more often than their taller counterparts. Who knows why? Are they all having sex with me? Is that it? (I'm not free to release that information, sorry)

5. If you're short, short guys can empathize with your small-person problems

I am a person with many hobbies and interests, but I will freely admit to you that the majority my life is about how I can't ever reach anything that's located on a top shelf at the grocery store. When I was dating around, I found the idea of dating a super-tall guy who had never had to ask a sales associate to help him get a box of Cap'n Crunch down exotic; but I'm glad that I settled down with someone who gets me on every level — including the level where I'm in a constant state of rage about how all jeans are too long for my legs.

6. You won't have to give up heels

When I met my boyfriend, I assumed that he'd be sensitive about the height thing, and resigned my extensive and expensive heel collection to the back of my closet, switching them out for Converse and flats. But soon after we got together, he asked why I had so many heels that I never wore. It turned out that he loved me in heels — and also, he had made his peace with his height and his body, and didn't need me to change the way I dressed or the things I liked to make him feel more like a man. Short guys know they are short, and very few of them will demand that you make concessions about it (the ones who do are jerks, obvi).

Short men live two years longer than tall men, on average — good news for any of my fellow morbid straight women who spend an inordinate amount of time wondering if they or their partner will die first.

Being short doesn't make you power-hungry, demanding, or give you something to prove. Jerks come in all shapes and sizes, yo.

9. You don't need to feel "tiny" in order to feel sexy

I've encountered a lot of women who say that they only want to hook up with taller dudes because they want to feel "tiny" and like they're being "ravished" in bed. To which I can only reply: dude, have you ever actually been ravished? It has nothing to do with height, unless your main sexual fetish is being carried back and forth across a room, over and over again. Sexiness, virility, and even old-fashioned machismo are not outside the domain of shorter guys.

Plus, the idea that the only way you can feel like a "real woman" in bed is to be smaller than your partner smells like anti-feminist propaganda to me, frankly. Why doesn't everyone just try to be whatever size they actually are, and just bang the hell out of each other that way?

10. Only dating guys who are above a certain height is pretty superficial

Listen, what turns you on is what turns you on, and if you can really only get a wide-on for dudes over six feet, that's a-okay. But if you're only into tall guys, I would urge you to think about why you'll only date tall guys. Imagine meeting a guy who said he'd only date girls with D cup boobs or larger. You'd think he was a total pig, right? You'd also think his priorities were all out of whack — having big boobs has nothing to do with being a good partner, or even being a good lover or physically attractive. Do you see where I'm going with this? It's worth looking inside yourself, and seeing if height is what actually turns you on, or just what society has taught you to prize in a partner.

11. Men who are into dating women who are taller than them can be pretty enlightened

Of course, this dating/height bias goes both ways. A lot of men want to date a woman who is physically smaller than them, for the same reasons that a lot of women want to hook up with tall guys: that's how society says it should go, and it physically replicates our social ideas of the roles men and women should play in heterosexual relationships — that men should be big and powerful, and that women should be less powerful.

That's why a guy who's game for dating a taller woman might have more progressive ideas about dating and women in general, too — a 2014 study suggested that men 5'7" and shorter did more housework, were less likely to get divorced, and were more open to dating older women. All facts that ring true to me — my dude pulls his weight around our house, and was game to date me even though I was 28 and he was 24 when we met. Though the paper didn't delve into why this disparity exists, I think we might be able to chalk it up to empathy. Short men have been considered "less than" by a culture that still equates height with masculinity, and this has opened their eyes to what a crock traditional gender roles can be.

Obviously, not all short guys are male feminists, and not all tall guys are cavemen who think you should go make them a sandwich. But short men have a different cultural experience than tall men, and I believe that this can make them excellent lovers, amazing boyfriends, and sensitive partners.

Or they're just better boyfriends because their faces are already located closer to your vagina. Either way, score!

Want more of Bustle's Sex and Relationships coverage? Check out our new podcast,I Want It That Way, which delves into the difficult and downright dirty parts of a relationship, and find more on our Soundcloud page.

More like this
Breeding Kinks Have Been On The Rise Since Roe V. Wade Got Overturned
By Lexi Inks
Are Quality Time & Gift-Receiving Love Languages Compatible?
By Lexi Inks
The Differences Between Polyamory & Open Relationships
By Lexi Inks
How To Politely Reject Someone Who Keeps Asking You Out
By Laken Howard and Lexi Inks
Get Even More From Bustle — Sign Up For The Newsletter