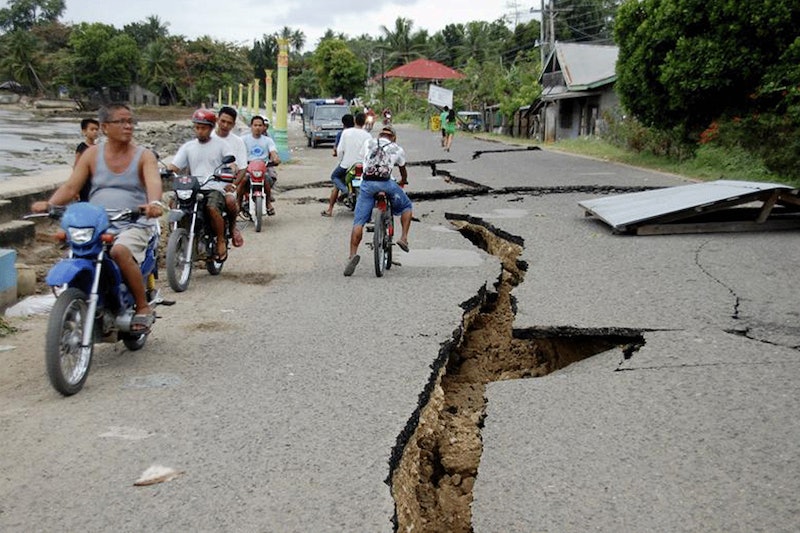 The central Philippines was hit by a massive earthquake that killed at least 93 and injured hundreds Tuesday. The 7.1-magnitude quake, down from an earlier estimate of 7.2, hit the island of Bohol at 8:12 a.m and is the strongest earthquake to hit the island in 400 years. Seventy-seven people were killed on Bohol, where the earthquake originated about 20 miles below ground. Most of the people who died were hit by falling debris. The nearby island of Cebu, the more populated of the two, was also hit.

Two stampedes were also responsible for many deaths. Nineteen people on Cebu were killed in a rush to evacuate a building where people were waiting to receive welfare checks, including a 4-year-old girl. At least five more were killed in an exodus from a sports center.

Amazingly, the death count is not as high as it might have been: It's the start of the Muslim holiday of Eid al-Adha, and schools and offices were closed in observance of the public holiday.

On both islands, the earthquake leveled buildings, destroyed roads and bridges, and resulted in panicked evacuations, already displacing more than 9,000 people. Ninety-five percent of school buildings on Cebu alone are regarded as unsafe. Churches dating to 1565 on Cebu and 1602 on Bohol were also heavily damaged.

Two hundred and eighty-nine aftershocks have hit so far —some at magnitudes of more than 5.0. The aftershocks will continue for the next month, according to a Philvocs official.

Because the earthquake was land-based, no tsunami warning has been issued. However, Cebu and Bohol have been designated to be in a state of calamity, and the President of the Philippines, Benigno S. Aquino III, will pay the islands a visit tomorrow.