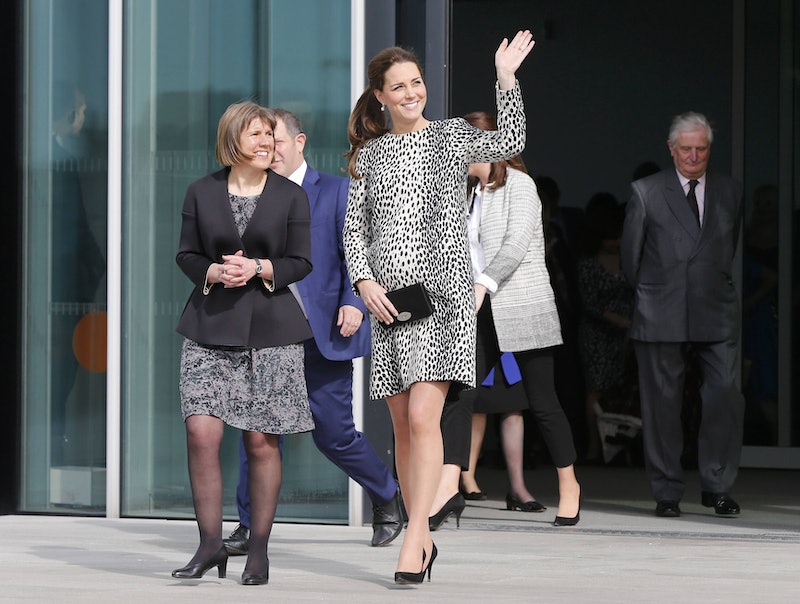 As a titled member of the monarchy and mother of Britain's future heir to the throne, the Duchess of Cambridge has quite a heavy burden when it comes to the image she presents to the world. However, fashion took the front seat when Kate Middleton sported an animal print topper on a public outing to view an avant-garde collection at the Turner Contemporary in London.

Rendered in a subdued palette of black and cream, the Hobbs coat's optical pattern took center stage on the expectant mother. Black suede pointy toe pumps and a slim black clutch accented the exuberantly printed coat, while Middleton kept her cosmetics and hair understated to balance the look.

Though the ensemble was inarguably aesthetically pleasing, it also ranked high amongst Middleton's array of elegant ensembles for a host of other reasons. Read on for nine ways in which Kate Middleton's Hobbs maternity dress is a sartorial — and cultural — win.

1. The frock proves that maternity clothing can go beyond wrap dresses and sweat pants.

2. Kate Middleton's decision to grace her public in a dress from her own closet is incredibly cost-effective and penny-wise.

3. The entire ensemble's black-and-white palette is incredibly on-trend for the season.

4. With its tailored yet slightly voluminous shape, Middleton's Hobbs frock is at once comfortable and chic, an essential combination for an expectant mother.

5. The shift's animal print gives the ensemble a sultry spin without resorting to Free The Nipple territory, which is a relief for both the royal family and anyone who keeps au courant with the news.

6. On that note, it is highly rare to see an animal print worn in a manner that isn't ostentatious or gaudy, making the ensemble a true victory.

7. The frock's aesthetically intriguing pattern melded beautifully with Middleton's art gallery visit; after all, who wears a boxy tweed coat to view a modernist gallery?

8. By minimizing her accessories and staying with a classic palette, Middleton simultaneously managed to stand out and refrain from overshadowing the exhibit, which seems an impossible task for a mere mortal.

9. The Duchess actually appears mirthful and radiant in her ensemble, which is more than I can say for a number of other dower public figures who don designer garb only to appear as if the clothing is the bane of their existence. A smile does wonders for any outfit, Middleton once again proves.

More like this
8 Photos Of Prince George & Princess Charlotte At Queen Elizabeth II's Funeral
By Jake Viswanath
The Prince William & Rose Hanbury Rumours, Explained
By Frances Stewart and Sam Ramsden
The Difference Between The Royal "Institution" & "The Firm" Shows Who's Really In Charge
By Savannah Walsh and Meguire Hennes
The 2022 Emmys' Top Nail Trends
By Olivia Rose Ferreiro
Get Even More From Bustle — Sign Up For The Newsletter