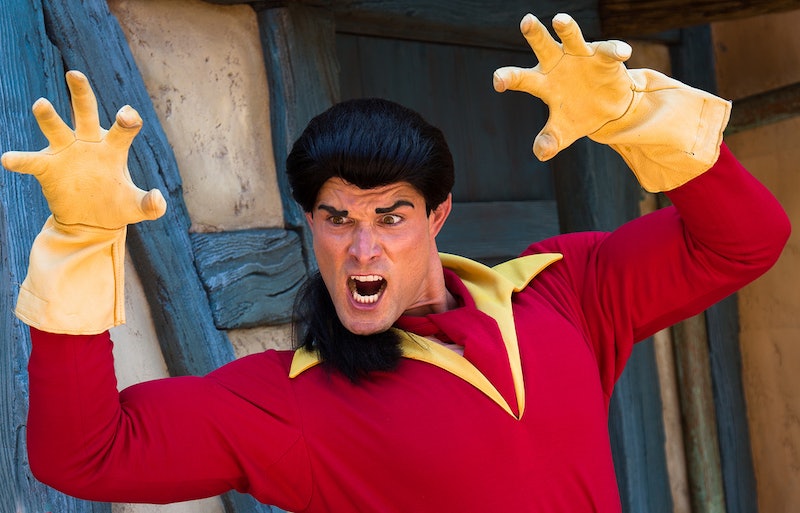 We talk a lot about the problematic way in which Disney movies enforce traditional gender roles for girls — but what about for boys? Sex educator and “MTV Braless” host Laci Green tackles just that issue in her latest video, “How Disney Stereotypes Hurt Men” — and not a moment too soon. I mean, yes, it's possible to be a feminist and still like Disney movies; but we do have to be aware of what they're teaching not only us about gender roles, but perhaps more importantly, what they're teaching kids about them.

As Green explains, studies have shown that kids adopt the movies they see into their play. This is why early exposure to the sorts of traditional gender roles so frequently seen in Disney films — especially, as Green notes, the earlier ones, like Snow White, Cinderella, and Sleeping Beauty — is such a big deal. If you're a woman, traditional gender roles dictate that you nurturing, sensitive, accepting, graceful, and passive; if you're a man, they dictate that you be tough, confident, active, aggressive, and competitive. Both sets of roles are equally problematic for a variety of reasons — but one of the biggest is the fact that they set the stage for inequality. And as we already know, inequality is no good for anyone.

Green is right when she says that we should be talking about gender roles for women in Disney movies a lot; the films (and again, especially the older ones) are pretty heavy-handed in their presentation of the feminine ideal. But what about the men? Men suffer from stereotyping issues in Disney movies, too… and yet for some reason, we don't talk about them that much.

So let's change that. Here's the breakdown of Green's explanation of why Disney stereotypes can be harmful to men as well as women; scroll down to watch the full video.

The leading men in Disney movies usually tend to big, tall, strong, muscular, and — more often than not — white. Seriously, you can count the non-white Disney leading men on one hand (Aladdin, Naveen, and... uh... well... hmmmm). The lack of diversity for women is an issue, too, but since we're dealing with the guys right now, let's keep our focus on them. Hercules, Gaston (who, admittedly, is a villain, but he's dressed up like a leading man), Prince Eric, Hans (also a villain disguised as a leading man), Kristoff, Prince Phillip (Sleeping Beauty's prince does have a name!)… all cut, white guys.

Furthermore, guys in Disney movies who don't fit that mold are often relegated to the sidekick role: LeFou (which, by the way, means “crazy” or “foolish” in French) in Beauty and the Beast, Wiggins in Pocahontas, and so on and so forth. They're portrayed as second-tier and often used for comic relief.

Many Disney films end with an epic battle between two men for pride, honor, respect… and the girl. Besides the fact that it portrays women as prizes to be won, it also has a pretty damning message for the men themselves, too:

3. “The Knight in Shining Armor”

This is the flip side of the “damsel in distress” trope: If a woman is expected to need saving, then a man is expected to come to her rescue. While it might seem preferable to be the knight over the damsel, neither role is really that great in the grand scheme of things. Specifically, the role of the knight means not only being physically strong, but also being brave, emotionally unwavering, unquestioning in the face of danger, and knowing exactly what to do and when to do it. If they fail in any of these capacities? They look like fools. Talk about pressure to perform.

Can you imagine Gaston vacuuming his house? No? Neither can I. In my head, when faced with the monstrous creation known as a vacuum, he stares blankly at the device with the unplugged cord in his hand, kicks it a few times, and then gives up and tosses it aside (likely leaving LeFou to scramble after it and take care of the housework for him). Disney leading men are incompetent when it comes to taking care of themselves, which is why they need other people to do it for them. The stereotypes keep feeding into each other: Men can't take of themselves, so women do it for them, which results in men not being able to take care of themselves, which results in them needing women to do it for them, and on, and on, and on.

If an alien watched only Disney movies, that alien's perception of humanity would look something like this: Men chase women (not the other way around), but only if they're young and hot. Not only that, but men do their chasing relentlessly, and they, specifically, must always be the active romantic pursuer. Women, meanwhile, are expected to wait for the guy to make the first move; under no circumstances are they to pursue men. Everyone is straight, and there are no LGBT relationships.

This isn't to say that Disney is anti-LGBT; far from it, as The Atlantic pointed out when Frozen was at its height. Furthermore, obviously Disney has begun switching up pieces of this puzzle lately — Merida shoots for her own hand, for example — but the picture painted overwhelmingly skews towards women not going after guys they like, and the full burden of getting a relationship going falling on the shoulders of the men. That's not fair for anyone.

Again, there's nothing that says you can't enjoy Disney movies, or that your kids can't enjoy Disney movies, or even that you can't enjoy activities that full under your gender's umbrella of “traditional gender roles” (cooking, for example). We do, however, need to be cognizant of the messages presented in the media we all consume — kids and adults — so we can consciously say, “I see you there, Message, and I don't agree with you.” Knowledge is power, and power is change, right?