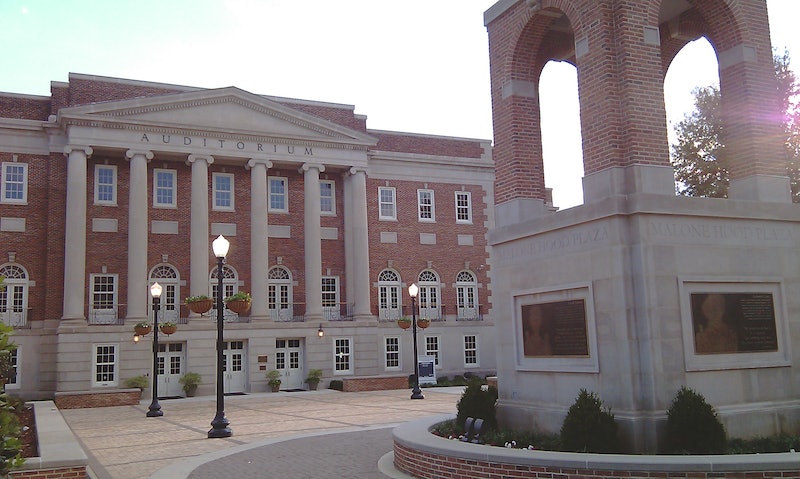 College kids are hopefully good about taking precautions to prevent contracting STDs, but it seems there are some universities where those precautions are even more necessary than usual. STD Check has compiled a lit of the five universities with the highest rates of STDs in the country — so if you're attending any of them, do yourself a favor and make extra, extra, extra sure you're using protection and using it properly. Because you have enough problems without having to get treated for gonorrhea, right?

Unsurprisingly, several of the STD-stricken universities are located in states where sex education is not what you might call ideal. Which should not be a shock — when you teach kids basically nothing about how to avoid STDs and then pack them off to the local state university far away from parental supervision, there is a very real, very high risk of them compromising their health.

Even if you aren't at any of these universities, of course, you should definitely still protect yourself. There are certain things that all college students should be aware of when it comes to sex, no matter where you go to school. But if your university didn't make the list, you can content yourself with the idea that your fellow classmates might not be quite as boneheaded and/or ill-informed as they might be. And if your school is on the list, you have my sympathy. Truly. If they give out free condoms, you should take some.

Auburn University in Alabama might not be the worst, but their STD rate is still pretty bad. Not coincidentally, Alabama has one of the highest rates of STD transmission in the country and a proscribed sex education program riddled with inaccuracies.

Alabama is the only state to have two universities in the top five (bottom five?) list. Did I mention how terrible the state's sex ed is?

Most people have to go on spring break to get an STD in Florida, but students at Florida State University can do it from the comfort of their own campus. Florida state law also requires schools to stress abstinence education during sex ed. Coincidence?

Surprisingly, Iowa actually does pretty well with sex ed — they mandate sex ed in schools, and don't require abstinence-only education. Still, the University of Iowa has been ranked as a party school, where apparently the kids are quick to forget all that education they got. Sigh.

Arizona also requires schools to teach kids abstinence during sex ed — and, in fact, says that schools don't have to teach sex ed at all of they don't want to. Does that contribute to the fact that they are the school with the highest rate of STD transmission in the country? Not necessarily, but I can't imagine it helps matters at all.

Maybe it's time to start doing more than hand out free condoms, guys. Maybe you should also explain how and why your kids should use them. Just a thought.

More like this
The 19 Best Tweets & Memes About Bisexual Awareness Week
By Lexi Inks
These 4 Signs Are The Seductive Sirens Of The Zodiac
By Brittany Beringer
Are Quality Time & Gift-Receiving Love Languages Compatible?
By Lexi Inks
Black Women's Equal Pay Day Highlights An Upsetting Problem
By Brandi Neal
Get Even More From Bustle — Sign Up For The Newsletter