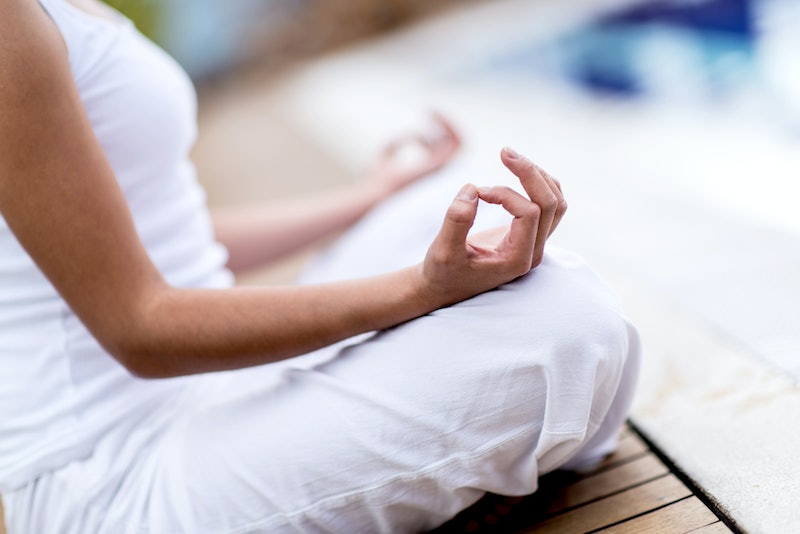 Possibly you, like most, have attended or continue to participate in yoga classes. Well boy does a member of the Catholic Church have some news for you pal, because a priest in Northern Ireland warns that yoga leads to "The Kingdom of Darkness," better known as the fiery depths of Hell. What’s that, now? You’re a frequent practitioner of sessions that enrich both your physical and mental health? Too damn bad, says this guy. Consider yourself booked for a one-way ticket to Burn City.

In an interview with Northern Ireland’s Derry Journal, Father Roland Colhoun discusses the sermon he delivered denouncing the practice of yoga or “Indian head massages” in relation to demonism and exorcism. “Pope Francis said ‘do not seek spiritual answers in yoga classes,’” he says, adding that the practice of yoga provides a spiritual risk that may cloud your Christian judgement. “When you take up those practices from other cultures, which are outside our Christian domain, you don’t know what you are opening yourself up to. The bad spirit can be communicated in a variety of ways.” Careful wayward sheep, lest you find yourself being exorcized for your exercise.

“There is definitely power from them,” he continues, “but where it’s from the Church is nervous and that’s why it fits into the sermon on the devil.” Naturally this stirred up quite the response from Hindu leadership, who note that while it was indeed “nourished” by Hinduism, yoga is a “world heritage and liberation powerhouse to be utilized by all.” They also note the irony of such an assertion by the Church, as sacred scripts on yoga are available in the Vatican Library. The Vatican seemingly subscribes to the ancient Christian tenet, “Keep your friends close and your enemies closer.” Church leaders have yet to issue a formal apology.

Father Colhoun isn’t the only priest to vilify yoga, however. Back in 2011, the Vatican’s chief exorcist Father Gabriele Amorth condemned it at a film festival in Umbria where he was invited to speak on the exorcism thriller The Rite. “Practising yoga is Satanic,” he said. “Satan is always hidden and what he most wants is for us not to believe in his existence. He studies every one of us and our tendencies towards good and evil, and then he offers temptations.” Temptations to stretch, heal, and reconcile with inner peace — masked as they are, these are bedrock of wickedness.

Anyway, since we’re already on en route to perdition, I’ve collated a working list of other things you may be doing that members of the Catholic Church disapprove of. Best to cover your bases, you know? We only have one life to sin.

Kiss your cookies goodbye, kiddo. A few years ago, Church leaders launched an inquisition into the materials being used to educate Girl Scouts. “Critics contend that Girl Scouts materials shouldn't contain links to groups such as Doctors without Borders, the Sierra Club, and Oxfam because they support family planning or emergency contraception,” reports the Huffington Post. More like Demons without Borders, amirite?

Aforementioned Yoga-naysayer Father Amorth has some words about your favorite wizarding series as well. “In Harry Potter the Devil acts in a crafty and covert manner, under the guise of extraordinary powers, magic spells and curses,” he says. This from a man who wields a cross to rid people of mental illness.

Feel free to draw your own conclusion about its ban of non-male leadership within Church hierarchy. Despite the Catholic Church’s authorization for women to participate in mass as altar servers years ago, a parish in San Francisco recently banned girls from serving at the altar. “I think it’s OK for one to just have altar boys,” Joseph Illo told the San Francisco Gate. “We're a bit more traditional here.” Yikes.