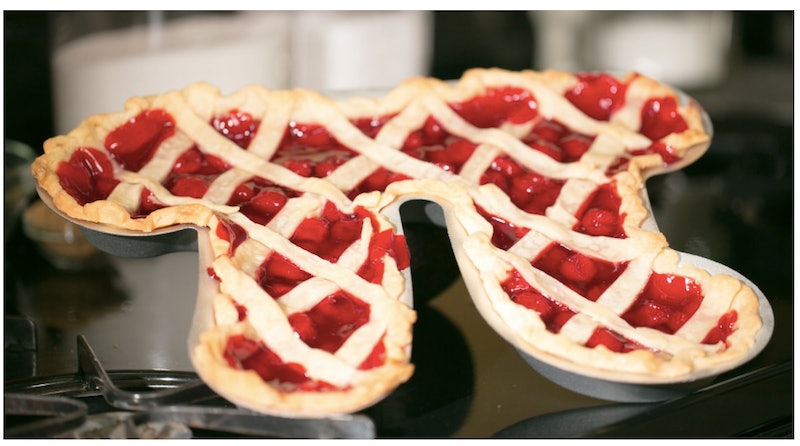 I’m about to blow my cover (yeah, right) as a full-on nerd, but I’m just so excited to celebrate National Pi Day. Pi Day isn’t just an informal holiday like May the 4th Be With You or Impossible Astronaut Day — it’s actually recognized by Congress — and this year marks a once in a lifetime event worthy of a big, math-filled party. Pi Day is always celebrated on 3/14, since pi is usually rounded to 3.14, but 2015 is the Pi Day of the century because it includes the first five digits of the theorem — 3.1415!

Some places, like MIT, take Pi Day very seriously as a celebration of mathematics and the never-ending stream of numbers that equal the ratio of a circle’s circumference to its diameter. The first Pi Day celebration was held at San Francisco’s ExplOratorium in 1988, and it’s spread into a wider celebration outside of just academics. There are Pi Day sales and deals now, people bake pies in an ode to the fascinating symbol, and, of course, throw awesome Pi Day parties.

Even if math isn’t really your thing, you can take this as an opportunity to inspire any kids in your life, especially young girls, to take an interest in math. And if you don't know any kids...well, who doesn't love a good excuse to party? From food to entertainment to everything in between, here's everything you need to throw a nerd-approved Pi Day party.

All this math sure does make me hungry. But then again, everything makes me hungry. Feed your math-enthused guests with a few cheeky food choices.

Nothing could be better than a pie on Pi Day — except for maybe a pie shaped like pi, of course. This pie pan from Amazon could also be used to make a cake and other treats, but where's the pun in that?

If pie is not really your thing (I feel you, I'm not a fan myself), you could always make some simple sugar cookies to share. Decorate them with the pi symbol, the number 3.14, and other fun math-related things.

And if you're looking for a more savory party food, make your own pizza pi. You can usually find premade dough and other pizza ingredients in the grocery store, and then you can use whatever toppings you prefer to form the pi symbol.

It might be a party inspired by a mathematical theorem, but it's still a party — which means you're going to need some cool cocktails. Surprisingly, there aren't too many pi- or math-inspired drink recipes out there (what? Engineers and mathematicians like to party too!), but you can still serve some boozy beverages.

Even if you don't get these for the whole party, at least get one for yourself. Whatever your drink of choice is — I suggest whiskey, Scotch, or vodka on the rocks — you'll hopefully have memorized at least a few decimals of pi by the end of the night. Find this glass over at Uncommon Green.

Are you getting sick of all the pi/pie references? I hope not, because you'll miss out on this delicious apple pie-inspired cocktail. I really like that it's warm ('cause it might be snowing during your party), and it's a cool ode to a classic American dessert. Miss in the Kitchen has the recipe.

I live by the notion that "nerd" and "geek" are not costumes, they're cultures, so let's stay away from those awful stereotypical outfits. You know, with the fake glasses and pocket protectors and all that (though if you actually need glasses, please wear them). Instead, let's celebrate Pi Day with some general themes.

As I've mentioned, this year's Pi Day is a once-in-a-lifetime event, so celebrate the day and the symbol with your fashion choices.

Or you could go with a general math theme and wear things inspired by numbers, theorems, areas (like geometry), and mathematicians.

Your guests probably don't want to do math problems at the party, but you can still play a few drinking games at least involving numbers and pi.

Ah, the old classic game of beer pong. I'm sure most of us played a game or two or 10 back in college. Only on Pi Day, you should arrange your cups into the pi symbol instead of the usual triangle. You will need all your geometry skills for this one.

You might remember this game from Pirates of the Caribbean (the one where Will plays dice to reveal Davy Jones' key), and it's actually a really fun game. Not only does it test your statistical prowess, but also your lying ability, as well. You can make your own stakes and bets as you go along. Learn to play the game here.