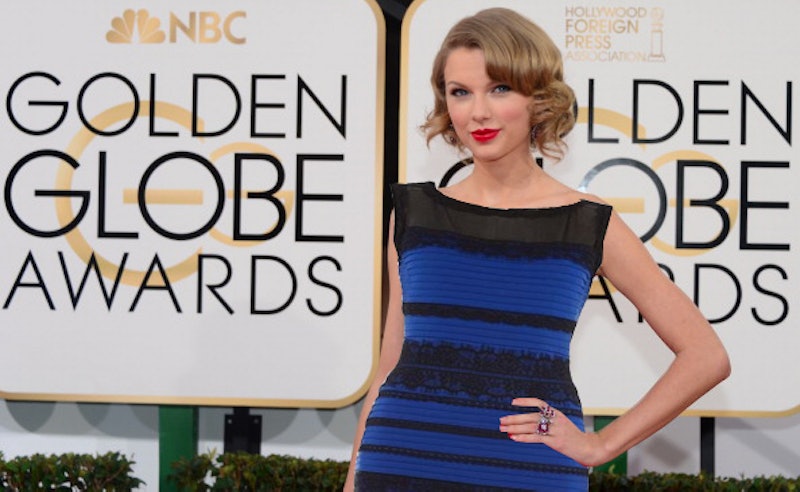 Think you've seen enough of #TheDress? The black and blue (or white and gold dress, depending on how you see it) sparked its own hashtag in a matter of minutes. This dress is now so well-known that The Salvation Army is even using it in their new campaign. It's crazy to think how one photo can go viral so quickly! After much speculation about the science behind the dress, there have been several scientific explanations stating there are differences in how the human eye perceives color, but I am not truly convinced. At least one thing's for certain: the dress is real.

You may have not realized that the dress is an actual item you can buy online. The British clothing retailer Roman Originals sells the black and blue version of the dress for $77. Since it's become such a big deal, I started to wonder what if celebrities started buying this dress? After all, Jax from American Idol already rocked it. What's stopping a Hollywood starlet from wearing it? Someone is bound to start that bandwagon, which would probably spark another controversy of its own.

Whether you are seeing black and blue or gold and white, here's what #TheDress would look like on these 7 celebrities, from Kristen Bell and Taylor Swift to Jennifer Lopez and Kendall Jenner. Maybe you'll even be convinced to try it yourself (while hoping it doesn't really change colors in person...)

The dress doesn't look half bad on the runway with some fun jewelry and Kendall's high-fashion look.

Kristen Bell would definitely not mind wearing the dress. If she were to try it, she'd like it so much that she'd want the dress in all of its other colors, too. We just know it.

Ugh, why does J-Lo make everything look good?! is what you'd say if she actually wore #thedress.

Blake would definitely take an old Hollywood approach by wearing the dress with big waves and classic accessories.

The black and blue dress at the Grammys?! Maybe next year...

For a more serious look, Reese would definitely opt for the black and blue dress.