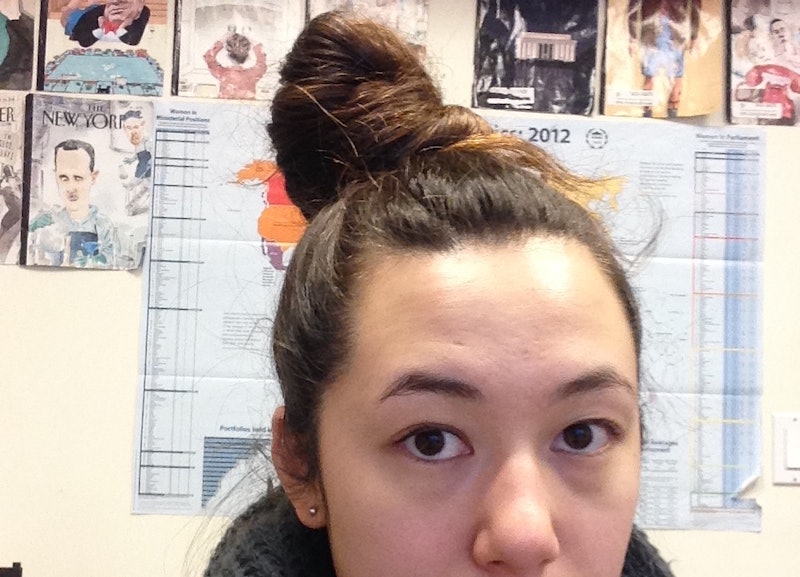 I started wearing a top-knot out of necessity. In college, I worked at a frozen yogurt store in Cambridge, Massachusetts. Even though the shop was air conditioned and we sold a frozen product, it was hot. Summers behind the counter were particularly brutal, with all the refrigerators and yogurt machines whirring, and the humid air that would seep into the small shop anytime any of the customers left the door open for too long. And at the time, my hair was impressively long. We're talking mermaid, haven't been to a salon in two years, down past the boobs long. I needed to get my hair off of my neck, otherwise I would die of heatstroke, and no one wants to be the girl that died of heatstroke in a frozen yogurt shop. (How terribly ironic would that be?) But I couldn't just throw my hair into a ponytail because one of the problems with super long hair is that it sheds all the time, and although shedding is generally gross, it's a particularly gross problem to have when you're serving other people frozen yogurt. No one wants to find a hair in their fro-yo. Trust me on this one.

To avoid wearing a hairnet, I took to putting my hair in a top-knot. It kept my hair off my neck and out of the frozen yogurt. I often finished the look off with a bandana, for a bit of a retro vibe. (The bandana also served a practical purpose of makeshift sweatband, which was pretty crucial some days.) An added bonus was that I didn't look totally terrible with my mandated yellow apron.

That job didn't last, but the top-knot did. It's become my signature look, primarily out of ease and convenience, but also because it looks good on me. It's distinctive and just trendy enough to make it seem like I care about style. The top-knot works with any outfit, from fancy cocktail dress to a white t-shirt and jeans. But after years of wearing this hairstyle almost every day, there are certain questions and comments I've heard over and over again, and I'm sick of them. Let me answer some of them, so that if you come across a woman or a man with a top-knot, you avoid making a fool of yourself:

In my humble opinion, using a sock to make your top-knot bigger is the hair-equivalent of stuffing your bra. It's a bit juvenile, and really sounds like a better idea in theory than it is in practice. I don't use socks or donut-shaped sponges to get my top-knot to look good. It's all just hair. But even if I did throw a sock up in there, why would I tell you my style secrets?

No. You cannot poke my top-knot because there's nothing in there except my hair. Poking my hair isn't going to open a magic door or something. It's literally just hair, and I spent time to make it look good, so don't you dare touch it and mess it up.

3. "Do you do ballet or Barre Beautiful or something?"

If only throwing my hair up in a top-knot would instantly grant me the grace and strength of a ballerina. But that's not how hairstyles work.

Yes, top-knots were (and in some cases, still are) worn by men in many Asian cultures, ranging from the samurai in Japan to Sikhs in India. But recognizing that this hairstyle has roots in Asia doesn't mean that I automatically round up to samurai warrior. It's a racially insensitive and naive thing to say.

5. "It seems really tight. Don't you have a headache?"

If my hair was tight enough to give me a headache, do you think I would keep it like that indefinitely? No. That would be dumb and painful.

Putting my hair in a top-knot is not going to make be so top heavy that I topple over with a simple push. I don't think that's how weight distribution works, and it's never been a problem before, so I doubt it will ever be one.

How nice for you. I wear a top-knot when I work out, when I go grocery shopping, when I eat a hamburger at my local bar, whenever I want. You should feel free to liberate the top-knot from the gym, and rock it wherever you go. Wearing a top-knot doesn't mean that I'm lazy and couldn't think to do anything else with my hair (although it is convenient). It was a choice, and a stylish one at that.

Have you seen that video of strangers chopping off the buns off unsuspecting male victims? It's cruel and heart-wrenching to watch, so no, it wouldn't be funny if you cut off my hair. At all. I've spent so much time growing out my hair so that I can have this hairstyle that for it to disappear in a moment would be devastating enough that even joking about it makes me cringe.

Perfecting the top-knot is an art. The line between looking ridiculous and looking chic is a fine one, and don't expect to toss up a perfect top-knot on the first try. That doesn't mean you shouldn't try! Top-knots are for everyone, even the people who ask annoying questions.