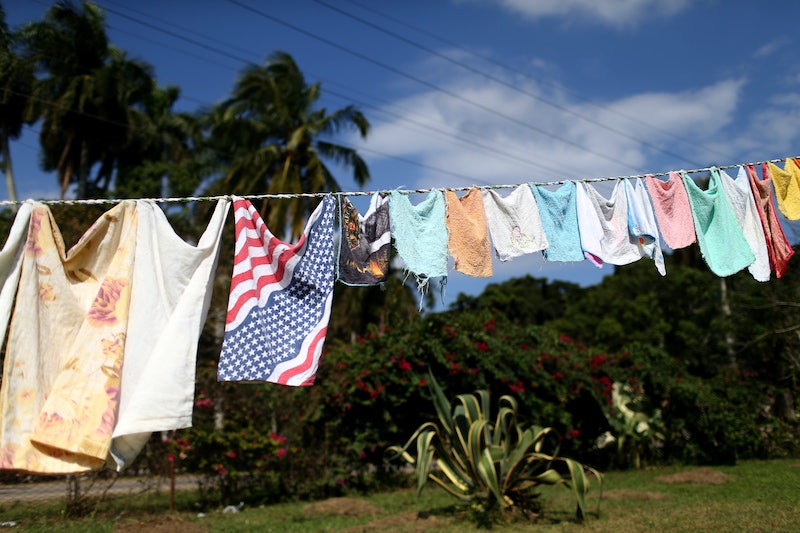 Salvo Sports, an Indonesian sportswear company, apparently decided it would be a good idea to make jerseys with the following printed on the inside collar: "Washing Instructions: Give This Jersey To your Woman. It's Her Job." And yes, the "It's Her Job" bit is bolded on the original. Just in case you weren't totally clear on the sexism.

It's kind of impressive, actually, just how offensive they manage to be here in only nine words. It's as though women are inherently experts on washing clothes. As though men can't do household chores like laundry. As though referring to someone's wife or girlfriend as a possession is OK. As though women don't also wear jerseys and play sports. As though women have any obligation to wash other people's clothes.

Obviously, this didn't go over well with lots of people in Indonesia. The company received a wave of backlash on Twitter, and it's not hard to see why.

The backlash was enough that the company issued an apology... although actually, it's more of a non-apology. Originally tweeted in Indonesian, the translation according to Reuters reads:

"The message is simply, instead of washing it in the wrong way you might as well give it to a lady because they are more capable.

"There's no intention to humiliate women. In contrast, (we want to tell the men) learn from women on how to take care of clothes because they pay attention to details.

"Not all men understand/know how to take care of their own clothes, women are more knowledgeable/experts on such matters.

"We apologize profusely for any misinterpretations."

Yeah... I'm going to go out on a limb and say that no one was misinterpreting what you said. Also, that first sentence doesn't help much; it is literally the very attitude to which people are objecting (men are not incompetent at taking care of themselves, and it's not women's job to take care of them, either). Furthermore, telling someone to give their dirty laundry to "their woman" is not at all the same as telling men to learn from women. Women do not have magical abilities to figure out how to wash things when you substitute sexist "humor" for actual washing instructions, anyway. And lastly, you are making everything worse.

Sadly, this is not the first time companies have gotten in trouble over sexist washing instructions. The Italian label Shoeshine recently sold items whose care instructions read, "Give it to your mom — It's her job." So not only was Salvo's joke offensive and not funny, it also wasn't even all that original. Then again, considering that sexist humor is just rehashing tired, old tropes that have been prevalent for centuries, it pretty much never is.

Do better, clothing companies. Do better.