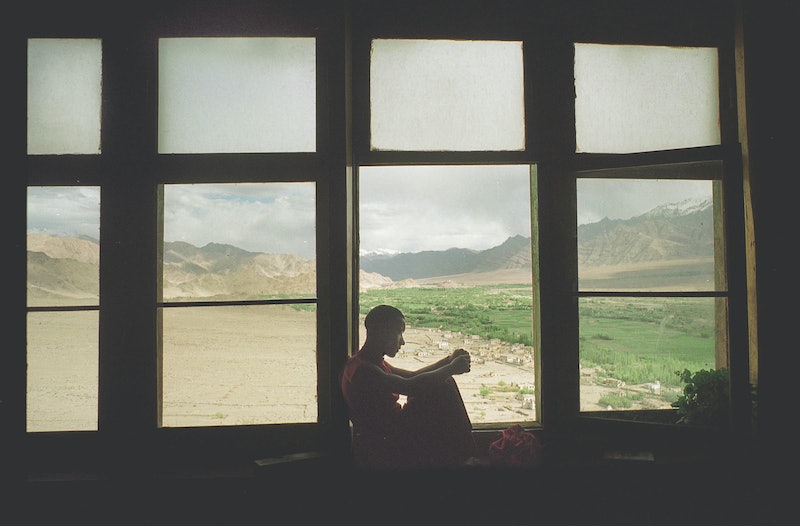 As self-declared Queen of the Hermits, I'm usually the last person to tell anyone to get out there and start making more friends. Apparently that's exactly what us introverts should be doing, however, because a recent study found that solitude is linked to higher mortality rates, especially for younger populations. The worst part? The effect is the same even if you like being alone, so I guess it's time to cancel your nightly date with Netflix and get out of the house. Ugh.According to Science Daily, the study analyzed data from previous health studies, with a total of 3 million participants overall. Researchers controlled for variables like age, gender, socioeconomic status, and other variables in order to focus on how solitude affects mortality rates.

The results? Loneliness is actually as detrimental to health as obesity or alcoholism.

Although the elderly population is more likely to report social isolation, the study found that it's a better predictor of premature death in people younger than 65. As Science Daily points out, loneliness can take many forms as well

— it's possible to be constantly surrounded by people and feel just as isolated as someone who never leaves the house.

<img alt="" src="https://38.media.tumblr.com/49a18cf568aa12f9aab562d1ea09938b/tumblr_nbt4qtbFaT1qj4315o1_500.gif" class="article-body-image" title="Image: https://38.media.tumblr.com/49a18cf568aa12f9aab562d1ea09938b/tumblr_nbt4qtbFaT1qj4315o1_500.gif"/>Even though the evidence is pretty substantial, the authors of the study are worried social isolation isn't getting the attention it deserves. "The effect of this is comparable to obesity, something that public health takes very seriously," Julianne Holt-Lunstad told Science Daily. "We need to start taking our social relationships more seriously." Considering that research has consistently linked social isolation to mental and physical health risks like suicidal ideation and lower immune system response, we probably want to do everything we can to avoid the "loneliness epidemic" that co-author Tim Smith claims is inevitable if the rate of people living alone continues to climb worldwide.It's not all doom and gloom, at least. The study also found that their results go both ways: relationships with other people have a positive effect on health. "The more positive psychology we have in our world, the better we're able to function not just emotionally but physically," Smith told Science Daily. So if you've been feeling a little alone lately, don't start planning your funeral yet. With the Internet making worldwide communication easier with each passing day, it's pretty easy to stay in contact with people you'd otherwise lose touch with.

Basically, don't feel like you have to give up all your precious alone time. Just remember that humans are social creatures, no matter how irresistible House of Cards may seem. Claire Underwood will still be waiting for you if you go get drinks with friends, and who knows? While you're out, you might meet a fellow House of Cards fan! (As if we aren't all obsessed. Come on.)

More like this
10 Ways To Be More Empathetic To Your Partner
By Raven Ishak and Lexi Inks
The 19 Best Tweets & Memes About Bisexual Awareness Week
By Lexi Inks
This Psychological Effect Might Be Keeping You From Hitting Your Goals
By Lexi Inks
21 Signs You're Not In Love Anymore
By Sara Altschule, Kathleen Ferraro and Carolyn Steber
Get Even More From Bustle — Sign Up For The Newsletter