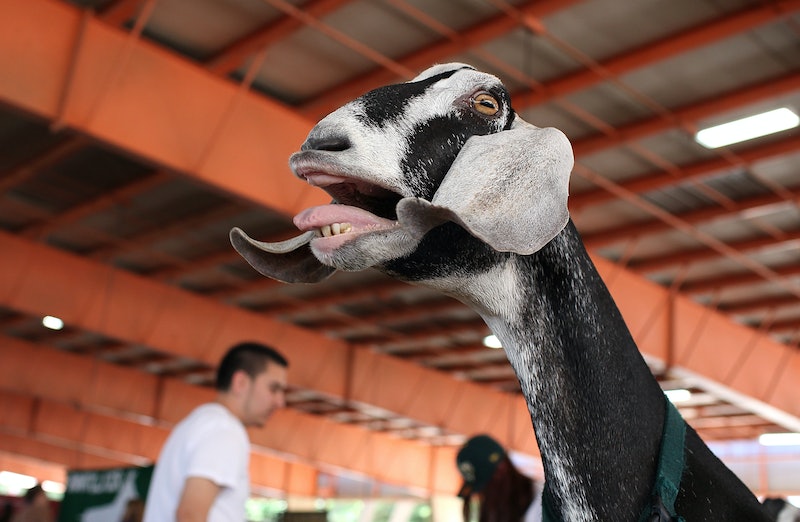 Most people know that stealing is wrong, you shouldn't kidnap farm animals, etc. etc. etc, but a group of teens in Milton, GA who stole a goat for a prom proposal learned that the hard way this week. As someone who was born and raised in Georgia, I can tell you that yes, this kind of thing totally happens more often than you'd think, and no, it doesn't ever stop being hilarious.

Let's be real here — if your nearest source of entertainment, a.k.a. Wal-Mart, was 45 minutes away, you'd probably end up stealing livestock for pun-related reasons too.

According to Cosmopolitan, four teenagers were pulled over by a local officer after a local man called the police, claiming that they threatened him with a shotgun as they loaded his neighbor's goat into their vehicle. When questioned, the teens quickly revealed the motive for the theft: one group member planned on asking a girl, "Will you goat with me to prom?" What better way is there to drive that particular pun home than with a real-life goat?

Get it? Get it? It's funny because they would have an actual goat. Oh, forget it, you people don't understand genius.

Hey, at least it's relatively harmless, unlike the girl who asked her black boyfriend to prom by having him fake-arrested at school. According to MTV, however, the goat's owner didn't find it particularly funny and is planning on pressing charges. Luckily for the kids involved, the goat is worth less than $100, so it just counts as a misdemeanor in Georgia.

Well, I'll be rammed. Kids sure goat above and beyond with promposals these days.

More like this
10 Ways To Be More Empathetic To Your Partner
By Raven Ishak and Lexi Inks
The 19 Best Tweets & Memes About Bisexual Awareness Week
By Lexi Inks
Why Harry Styles & Olivia Wilde Make A Great Couple, According To Astrology
By Nina Kahn
26 Ghost Story Podcasts To Get You Ready For Halloween
By Jessica Booth, Mia Mercado, JR Thorpe and Emma Carey
Get Even More From Bustle — Sign Up For The Newsletter