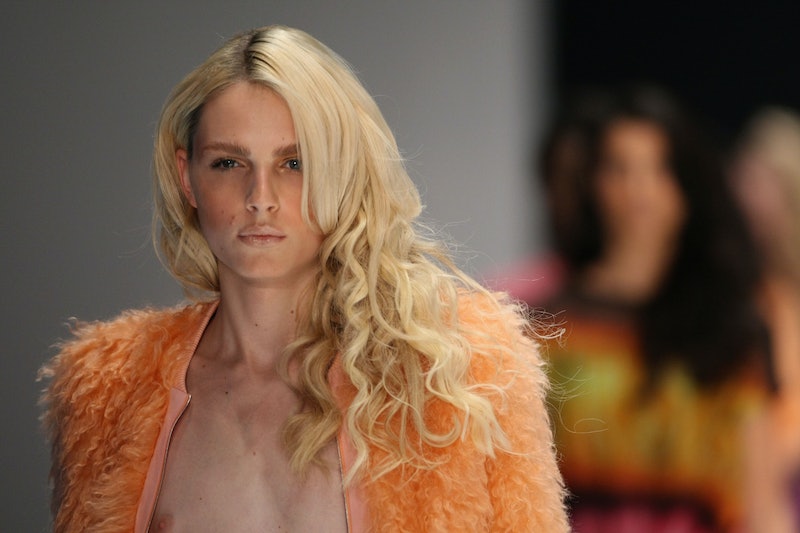 This month, Andreja Pejic walked London Fashion Week for Giles Deacon, her first show since she came out as transgender in July of last year. Since her announcement, the model subsequently spoke about undergoing gender reassignment surgery (GRS) in the United States. As an exciting addition to the model's already triumphant year, Pejic will walk the Melbourne catwalk where she first walked after coming out as trans, making her badass year come beautifully full circle.

In an interview with Australian news site, news.com.au, Pejic describes her inspiring journey: In 2008, the stunner was spotted by modeling agent Joseph Tenni as she worked at a McDonald's. Tenni immediately noticed the striking features of the then-teenager and gave her his business card. Pejic took a few months before reaching out to Tenni, but when she did, the scout signed her to the agency's men's division immediately.

Since her signing, Pejic has modeled menswear for the likes of Thom Browne, Jeremy Scott, and Paul Smith, but the stunning model credits Jean Paul Gaultier with allowing her femininity to be showcased alongside her androgyny. In the interview, Pejic recounts, "I started with his men's shows and then did his women's shows, the couture, the [women's] campaign. Gaultier came along and supported me at the right time when I needed people to understand my aesthetic and what kind of career I could have."

Andreja Pejic, now having come out, a decision she refers to as "my truth," and is unstoppably moving forward with what will undoubtedly continue to be a brilliant career as a model. With Pejic's first film role and an already stunning body of work, the model's star only seems as though it will rise from here.

More like this
The 2022 Emmys' Top Nail Trends
By Olivia Rose Ferreiro
Bella Hadid's Best Runway Looks Of All Time From Paris, Milan, & More
By Allie Fasanella
I Can’t Stop Thinking About Emily Ratajkowski's Exposed Thong Look
By Allie Fasanella
Hailey Bieber Channeled Jackie Kennedy At Paris Fashion Week
By Allie Fasanella
Get Even More From Bustle — Sign Up For The Newsletter