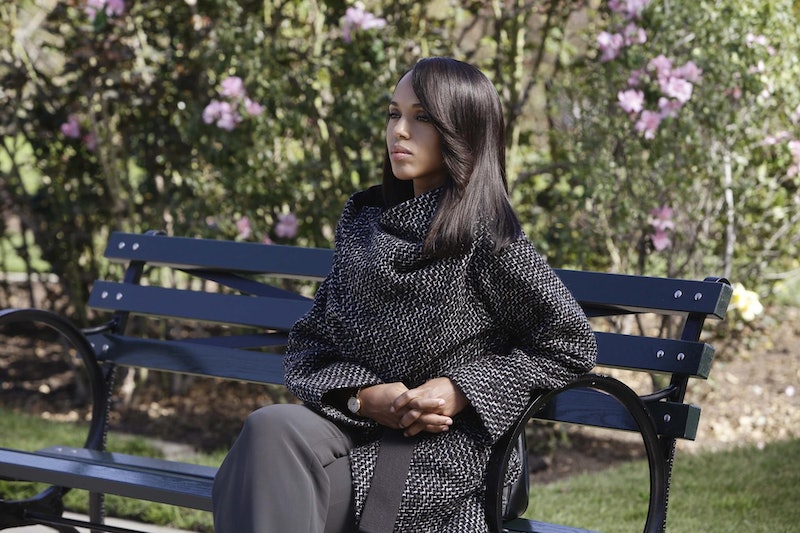 I never would have predicted it in a million years, but Lena Dunham of Girls fame is coming to Scandal next week — but is Olivia Pope ready for the zaniness that her character looks to be bringing with her? After all, Olivia is still reeling from a major trauma and is only just now easing herself back into work. She might have support from her friends, but she was still carrying a gun around her apartment and drinking white wine just this week, after all.

Based on the trailer, it seems that next week's episode will involve Dunham's character as a client writing a tell all book. And since her name is apparently Kinky Sue (hopefully that's not the one her parents gave her) it's not hard to imagine just how scandalous such a book could be, given that she lives in our nation's capital and all.

So who exactly is going to be in this book? Senators are probably a given, but will we also see any cabinet secretaries? Any high ranking military officials, even? And will there be any familiar names? I for one could easily see the irritating and hypocritically self-righteous David Rosen being the sort to wind up in such a tell-all. Or maybe Leo Burgen? Maybe she knew of — or was even friends with — Cyrus's ex-hooker new husband, who we're probably due to see again soon.

And if the girl has any dirt on B6-13 agents, we might as well set fire to OPA offices now.

Which brings us back to how Olivia Pope might handle being back at work. Since this thing is probably going to involve dealing with lots of powerful, angry people at once, it is not only not a good time for Olivia to be in any way off her game, but it also might involve a lot of stress and a lot of yelling. which is not good for her. On the other hand, maybe a good, old fashioned sex scandal is exactly what our favorite crisis manager needs. After all, it's not quite the same stakes as a hostage crisis or a terrorist threat.

Of course, that also might mean that, after everything she's dealt with, Olivia might just not be into it and might have some sort of breakthrough where she decides to change careers or devote herself to something more meaningful than tell all books by people named Kinky Sue. But given that Lena Dunham has a multi-episode arc lined up, such a revelation would have to be a long time coming.

One thing is for sure though — this next episode looks like it will be nuts.