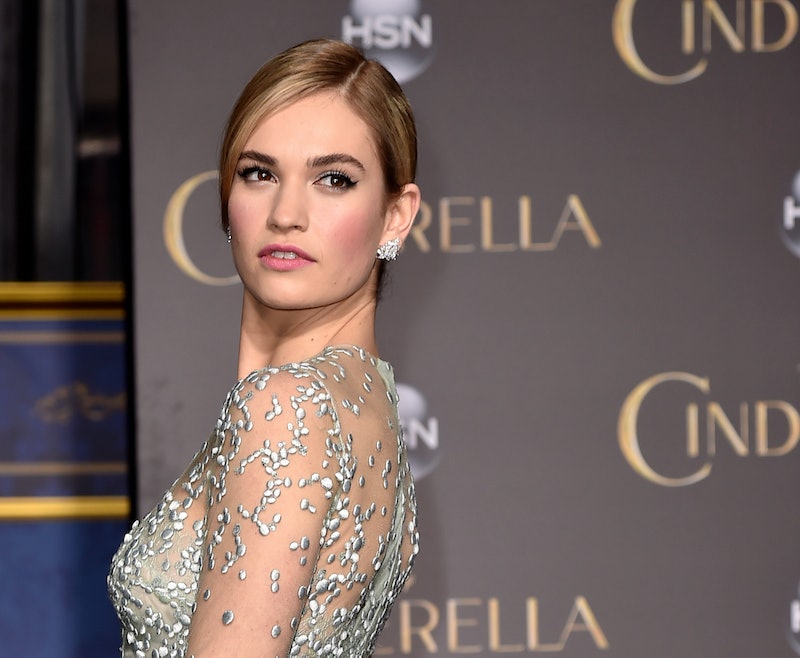 Fashion week may officially be over, but at least we still get to see Lily James parade down Cinderella red carpet after Cinderella red carpet, each time in a dress more chic than the last. Her looks ran the gamut from funky-fun ballerina (and iguana) printed Mary Katrantzou at the Berlinale International Film Festival to downright showstoppingly elegant in LA. And you know what (one of) the best things about her styling choices is? Her propensity for Cinderella-themed accessories.

Yep, from the get go, she's been wearing specially-designed "glass slippers": she wore the absolutely beautiful Jimmy Choo concoctions both in Berlin, and in Los Angeles (and she looked pretty darn fabulous at each) — but the themed accessories don't just end there: she's also sported a couple of seriously on-point clutches as well. At the LA premiere, she wore an extremely cheeky clutch designed by Charlotte Olympia, which was oh-so-cleverly fashioned to look like a grandfather clock chiming midnight (AKA the coolest purse ever).

You'd think that things couldn't possibly get more on-the-nose for the character than that (Charlotte Olympia's pretty hard to beat in terms of clever-chic, after all), but that's where you'd be wrong — because at the recent Toronto premiere, she topped off a minimalist white Dior dress with what might just be the most Cinderella-iest accessory ever. Check it:

A gorgeously retro nod to the original Disney film hand-embroidered onto a quaint, book-shaped clutch? Paired carefully with a simple dress, where it could take center stage just like it deserved? Be still, my heart! I don't know about you, but the Olympia Le-Tan clutch just about sealed Lily James' status as a bonafide fashion icon in my book.