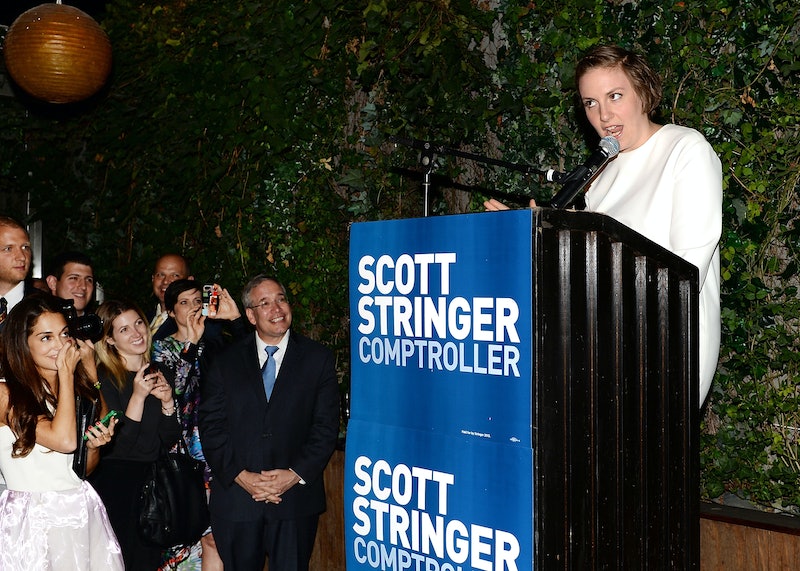 Austin’s music, film, and technology festival South by Southwest is shaking things up this coming year with keynote speakers lined up for each day of the festival. The festival is a huge gathering for artists and fans alike and each day will kick off with inspiring and empowering talks from those in the industry who know the meaning of “grassroots.” Girls creator Lena Dunham is speaking at SXSW and is among the first of the special guests to join the festival.

Dunham is already skilled in the art of film screenings, band showcase hopping, and food cart perusing — her work has been part of the festival since 2010 — and we can’t wait to hear her speech and follow her adventures via her puppy-and-nail-polish-centric Instagram.

To get Lena ready to transition from screenwriter to speech writer, we’ve lined up a compilation of our favorite inspiring celebrity speeches.

Learn from the Guy Who Set the Bar: Dave Grohl’s 2013 SXSW Keynote Speech

Dave Grohl gave an incredible speech at last year’s SXSW. It was heartwarming and charging all at once. He’s accomplished quite a lot as an artist and it was clear in his speech that he was both humbled by his success and desirous to do right by his power in the industry. He gave personal history without being cocky and great affirmations without being preachy.

Inspiring Line: “What matters most is that it's YOUR VOICE. Cherish it. Respect it. Nurture it. Challenge it. Stretch it and scream until it's fucking gone. Because every human being is blessed with at least that, and who knows how long it will last . . .It's there, if you want it.”

The first 20 minutes of Conan’s speech is the sort of “stickin it to ya” humor you’d expect from the master comedian and late night talk show host. However, his words to the graduating class on how we can allow ourselves to fail felt truly poignant to the millenial generation. In an economic time where jobs and futures are uncertain for many young adults, Conan struck a chord on those fears and doubts, and then released them. He instructed students on how to find success through kindness and building ourselves back up after a fall.

Inspiring line: “Your path at 22 will not necessarily be your path at 32 or 42. One’s dream is constantly evolving... It is our failure to become our perceived ideal that ultimately defines us and makes us unique. It's not easy, but if you accept your misfortune and handle it right, your perceived failure can become a catalyst for profound re-invention."

Jane Lynch Was Full of Enthusiam at Smith College

Sure, SXSW is all about the art, but it should be about the fun too. Jane Lynch gave a riotous and cheerful speech to the women of Smith College. She seemed just as excited to speak to the audience as they were to listen. We loved every second of it.

Inspiring line: "You are so schooled in critical thinking, it almost hurts to look at you."

True to her signature style, Fey accepted the award with plenty of humor, social satire, and real grace. Watching Tina Fey on stage is watching a true professional. It’s clear that she is not just deeply talented, but also incredibly hard-working and fiercely committed to her craft. Tina Fey continues to make the world a better and funnier place for women.

Inspiring line: “Apparently, I’m only the third woman ever to receive this award, and I’m so honored to be numbered with Lilly Tomlin and Whoopi Goldberg, but I do hope that women are achieving at a rate these days that we can stop counting what number they are.”

As Stephen Colbert returned to his desk after losing his mother, he gave a deeply moving tribute to her at the top of his show. Audiences rarely see the host break character on his show and this instance gave fans deep insight into the man that is Stephen Colbert. Proof that the greatest speeches really do come straight from the heart.

Inspiring line: “But the fact that my mother was 92 does not diminish it; it only magnifies the enormity of the room whose door has now quietly shut.”

Poehler spoke at Harvard University Class Day and filled her speech with plenty of wisdom and lots and lots of heart. Furthering Conan’s point that being kind and open is a really great way to get ahead. Cheers.

Inspiring line: "Try to keep your mind open to possibilities and your mouth closed on matters that you don't know about. Limit your 'always' and your 'nevers.' Continue to share your heart with people even if it has been broken. Don't treat your heart like an action figure wrapped in plastic and never used. And don't try to give me that nerd argument that your heart is a Batman with a limited-edition silver bat-erang and therefore if it stays in its original packing, it increases in value."

More like this
Here’s Everything You Need To Know About Operation London Bridge
By Bustle UK
Romance Authors Are Mobilizing For Reproductive Rights
By Natalia Perez-Gonzalez
A New Portrait Shows King Charles With William & Kate Before The Queen’s Funeral
By Stephanie Topacio Long
Who Is Nick Cannon Dating & How Many Kids Does He Have?
By Jordyn Tilchen and Radhika Menon
Get Even More From Bustle — Sign Up For The Newsletter