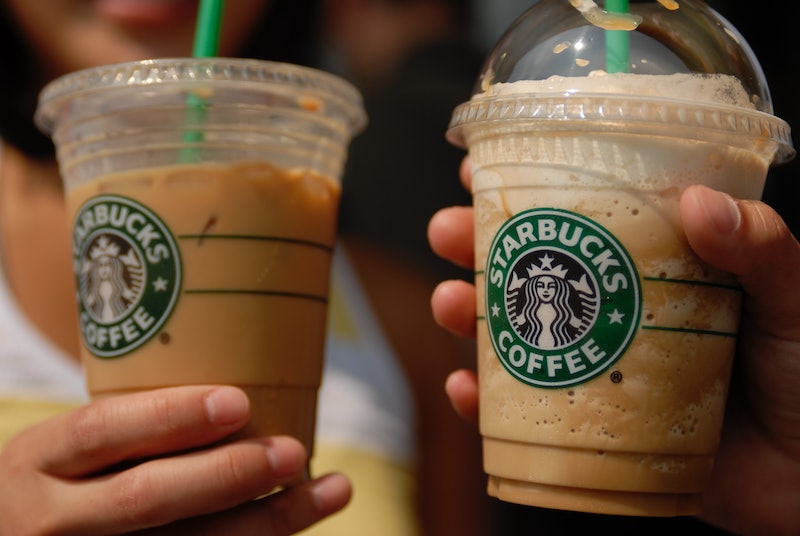 It's certainly been a big week for Starbucks, hasn't it? First we got news that the order ahead feature of their app would be expanding; and now, we've learned that Starbucks will begin offering cold brew iced coffee in 2,800 of its stores starting March 31. Given that they first started testing it out last summer, it's about time, right? Cold brew lovers of the world, rejoice!

According to a press release, the reason it took so long is because the 'Bux wanted to make sure it absolutely perfected its version of the coffee house favorite. “We began by asking what we wanted from cold brew,” explained Starbucks Research and Development team member Michelle Sundquist. “Then we looked at qualities of the coffee created through the cold-brewing process and began to narrow in on the specific flavors we wanted — and that involved looking at different roast levels, coffees, and cold-brewing styles.” The resulting Cold Brew Blend “combines coffees from Latin American and Africa,” and was designed specifically for this purpose. Apparently the brew itself, which takes 20 hours to make, is “smooth,” “rich,” and “refreshing,” with notes of chocolate and citrus.

Okay, yes, I know Coop is drinking hot coffee here, not iced — but that rapturous joy is what I imagine most of us anticipate feeling like at the idea of consuming delicious, delicious cold brew.

Although the 2,800 locations in which cold brew will be served cover the Northeast, Mid-Atlantic, and Midwestern U.S. as well as a handful of Canadian stores in Toronto, Vancouver, and Calgary, you'll notice that it's still a fairly limited release right now: According to Statistica, there are nearly 12,000 stores in the U.S. alone. However, Starbucks does tend to roll out new things in waves (like the order-ahead system); as such, we can probably expect cold brew to expand as time goes on. Interestingly, Foodbeast theorizes that the lack of cold brew in West Coast locations might have something to do with poor test results in San Francisco…but it's kind of anyone's guess at this point.

In any event, cold brew will be offered year round in the stores supporting it — but you'll have to get there early in order to nab some. Because of the lengthy brewing process, each store will only be making one batch — roughly 40 Grande-sized cups — per day. Rise and shine!

While we're on the subject, does anyone else kind of hope that Starbucks eventually starts offering these other coffee shop standards? I mean, I realize most of them are probably too difficult, complicated, or costly for the chain to pull off…but I can dream:

I suspect that latte art is too time-consuming for the level of traffic most Starbucks locations see on a regular basis to become a common occurrence. From what I gather, though, some of them do it from time to time; it's apparently delightful, so hey, hope springs eternal, right?

As is the case with latte art, it's likely that French press coffee just isn't practical for Starbucks' volume of customers. But gee golly, wouldn't it be great?

I love a good chai latte or green tea latte as much as the next girl, but let's face it: Starbucks' versions don't actually taste like tea. I know I've mentioned it before, but have you guys ever had a London Fog latte? They are delicious, and given that the base is Earl Grey, I would imagine it would be tough to oversweeten it in the same way the 'Bux's chai and green tea lattes are.

As far as I know, Starbucks locations don't typically have liquor licenses; as such, this one might be a little out of reach. I'd still love to be able to get an actual Irish coffee at Starbucks, though — not just something flavored with some sort of nebulous “Irish cream” syrup.

I've been longing to try one of these ever since I read about it in that awesome coffee infographic I found last year. Fun fact: Affogato is apparently Italian for “drowned” — which makes sense, given that a cafe affogato is essentially a scoop of ice cream drowned in espresso. Yum.