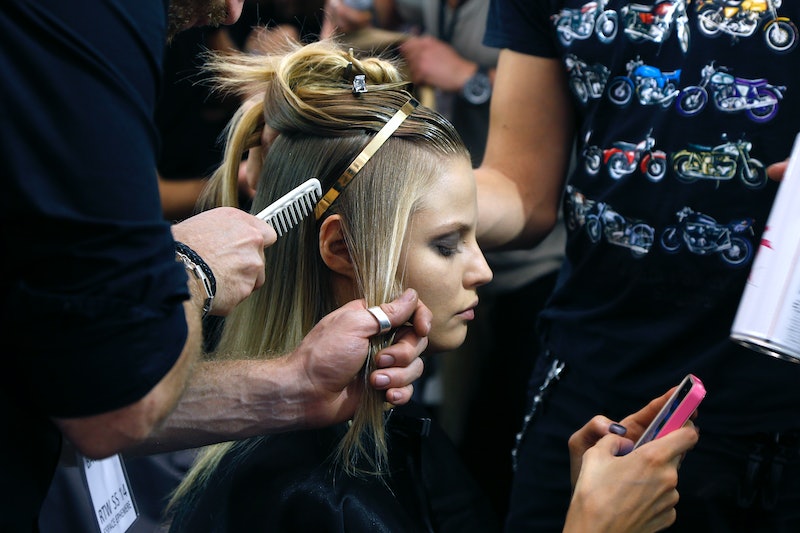 Jess Perez’s modeling resume is nothing short of impressive. The Costa Rican model has appeared in the Sports Illustrated Swimsuit Edition twice, shown up on the pages of major magazines including Elle and Cosmopolitan, been the face of brands like Abercrombie & Fitch and Foxy Jeans, and according to her Instagram, regularly travels around the world to beautiful, exotic locales for shoots. But this seemingly glamorous lifestyle isn’t without some mundanity. Beautiful people have to deal with money, too, and Perez is here to help them do that, as simply and responsibly as possible.

In about two months, Perez is launching a mobile app called Tycoon, a financial tracker and personal organizational tool, catered to freelancers in the fashion industry. After inputting some basic information like client name and rate, the user will be able to keep track of jobs and of when payments are due. “The app will tell you if something is overdue or not and let you e-mail your agency or your accountant and let them know when something is past due,” said Perez in an interview with Bustle.

The inspiration for Tycoon came from 13 years in the modeling industry. According to Perez, "The finances was the part about [modeling] I found the hardest, and there’s still not a lot of support out there. There still aren't the best systems out there to help disentangle that." To manage her own finances, Perez turned to an accountant for help, and learned how to use QuickBooks. But when Perez suggested that solution to her colleagues who were having the same financial issues, they balked. "They were like, ‘What are you talking about? I checked it out and this is very complicated. I don’t need all of this. It’s too robust.'"

Perez was inspired to design a simpler tool, with the added benefit of a mobile interface that would cater to the transient modeling lifestyle. "It starts with this huge problem of how do you keep track of your different jobs when you’re working in different countries, you’re traveling, you don’t have your laptop with you all day long." The simplicity of the app is one of its biggest benefits, according to Perez. "I’m going to make this easy for you. I’ll give you something you can have on your phone so when you’re being flown from the Bahamas to Thailand to the United States for work, you can keep track of what’s going on."

Although Perez understands that all freelancers and contractors deal with these financial troubles to varying degrees, at this point, she is focused on those in the fashion industry because they are most at risk for exploitation. “One of the differences between a freelance writer and a ‘freelance’ model is that we have agencies as middle men, and usually, the freelance writers are on their own,” said Perez, and having this third party managing with your finances can cause major complications. “When you have direct contact with your clients, you have a lot more information about payment expectation… With us, we go through our agency. So we’re basically, in some sense, at the whim of whatever they tell us.”

Agencies are not exactly known for being forthright with their models, especially when it comes to money. Over the years, more and more models have sued their agents for failing to pay them money that they were owed and providing incorrect or inaccurate income statements. Perez has witnessed this tension firsthand, and chalks it up to a lack of communication. She hopes the app will empower models to speak up to their agencies and ask for what's owed to them. "It seems so ridiculous that people don’t know this information, but it’s really difficult to keep track of it if you’re flying around the whole world, and you have multiple agencies, and if you’re relying on third party information." Tycoon can be the tool that makes sure models have accurate information at their fingertips, and ultimately hold agencies accountable to keep them honest.

Models aren't always the best at managing their own finances, either, in part because they don't know when the next paycheck is going to come. Over the course of her career, Perez has seen some models make hundreds of thousands of dollars per year, only to leave the industry penniless and with no education. "Models should not be at the end of their careers with nothing to show for it." She thinks it's entirely preventable, with a bit of planning and organization, and a change in attitude. Models who don't think of modeling as a business are short-lived, in Perez's opinion. "That's the bottom line."

When asked about others' reactions to her project, Perez said, “I think probably people’s reactions is to roll their eyes like, ‘Oh, God. What’s this idiot going to do?’ And they probably assume it’s going to be something related to getting dressed in the morning and style.”

But her industry expertise is arguably her most important asset in building this company. And, somewhat surprisingly, given all the stories about sexism in Silicon Valley and her lack of coding experience, Perez has been embraced by the nerds. The tech industry has embraced her and her idea, because “it’s a lot of people who come from various different industries [who] come together and want to solve a problem in an industry they came from… I know the problem. I’ve lived the problem. I want to solve the problem. Most of the response has been, ‘That’s great. Solve it. Go for it. You should do this app. How do you need our help?’"

Asking for help from others and building out a network is how Perez became successful as a model, and she's used those same skills to find her new niche. It was through a meet-up at Uncubed, a company that helps connect start-ups with employees, that she met Chris Johnson, who has become a mentor throughout this process and helped flesh out her idea. "He’s been wonderful in everything, introducing me to my co-founder, giving me lists of lawyers to speak to, giving me a to-do list of things that I should be doing now." With Johnson's guidance, she found an India-based designer Huzefa Bagwala on oDesk.com to build a wireframe, and as of this week, Perez has built a team that includes a UX/UI designer and two web developers.

Perhaps most impressive is that Perez is putting her money where her mouth is. Although she's had some interest from other potential investors, all of the Tycoon's funding at this point has come from money she earned during her modeling career. “The reason I can have this company is because I managed my finances well, and I kept track of my things, and I had systems." Perez wants to be the poster child for responsible money management in modeling, because clearly, she's done it well. "If [other models] haven’t been able to figure it out, I want to help them figure it out. And I’m going to create those systems and I want to be the person that they think of when any model thinks to themselves, ‘I’m lost with my finances. I don’t know what to do.’”

Although not without its challenges, ultimately, the jump from fashion model to start-up founder hasn't been a huge one. Perez admitted that she didn’t become a successful model until she started thinking of herself as a business, and throughout her modeling career, “I’ve thought about marketing strategies, and I had goals every year with my booker about who to target, what I need to change to get into certain markets, and there was always a plan." The main difference is that now, instead of branding herself, she's branding her own mobile app.

Tycoon won’t stop with an app, though. Perez hopes to expand to “build out the company so we can have every single possible resource that they could need available to them, not talking to them in a degrading or complex fashion.” All freelancers have a certain rebellious spirit at heart, but that free spirit also presents unique challenges. “I think it’s a certain mentality and certain creative person where these types of things, like the business or finances, don’t come that naturally because they’re rebels at heart." Perez understands that perspective because, "I’m a rebel in a way."

She just happens to be a rebel with a retirement account and a start-up.

More like this
Kim Kardashian Reveals Her Response To Kanye’s Fashion Opinions
By Jake Viswanath
Who’s The Richest 'Grey’s Anatomy' Star? See The Net Worth Of Each Cast Member
By Hugh McIntyre
Shonda Rhimes' Net Worth Makes Her One Of The Wealthiest People In TV History
By Hugh McIntyre
How Much Are The 'Schitt’s Creek' Stars Worth?
By Hugh McIntyre
Get Even More From Bustle — Sign Up For The Newsletter