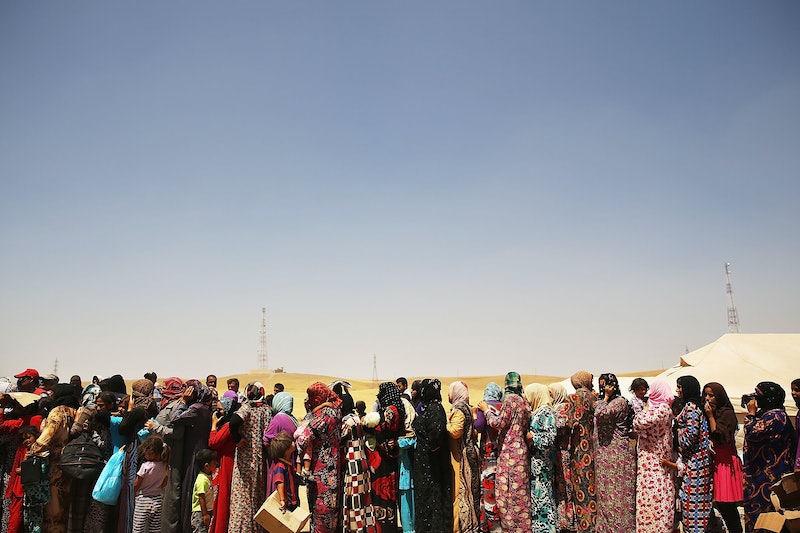 Although Hillary Clinton's email account has been making headlines, her foundation's "No Ceilings" report on the status of women's rights around the world is in dire need of the spotlight. Twenty years ago at the United Nations' 4th World Conference On Women in Beijing, First Lady Clinton famously said, "If there is one message that echoes from this conference, let it be that human rights are women’s rights and women’s rights are human rights, once and for all." This simple yet radical statement bears repeating (and repeating), and so the Clinton Foundation along with the Bill and Melinda Gates Foundation compiled The Full Participation Report to flesh out all the ways women's rights have changed since the former Secretary of State's 1995 pronouncement.

The weighty report is packed with statistics on the health, occupation, education and safety of women around the world, from America to Zimbabwe to Pakistan and Brazil. Although it includes a dizzying array of facts and charts, the entire compendium is worth reading, if only to get a sense of how far women have come over the past twenty years — and how very far we still need to go.

These are 8 vital facts of many that you should know about global women's rights today.

1. Rates of Death During Childbirth Have Decreased

Let's start with some good news: according to the report, the rate of women who die in childbirth has gone down by 40 percent in 76 countries and by almost 60 percent in South Asia from 1995 to 2013. This rate is directly linked to education, as the more education a woman has, the less likely she or her child is to die during childbirth.

In high-income countries, men make around 15 percent more than women do. The wage gap is as low as 6 percent in Belgium and as high as 37 percent in South Korea. The gap tends to increase during a woman's childbearing and childrearing years, which the report calls a “motherhood penalty.”

And you thought the campus rape statistics in the United States were horrifying. Of these 1 in 3 women who experience sexual and physical violence, a majority of them suffer at the hands of their partner.

Cultural attitudes greatly shape how men and women view spousal abuse. According to data collected in the report, more than half the men in Algeria, Bahrain, Egypt, India, Iraq, Nigeria, the Philippines, Rwanda, South Africa, and Zimbabwe believe beating their wives is sometimes acceptable. In addition, a recent U.N. study of 10,000 men in Bangladesh, Cambodia, China, Indonesia, Sri Lanka, and Papua New Guinea felt it was their right to have sex regardless of whether a woman provides consent.

5. More Women Are Enrolled In College and Universities Than Men

Women have made major gains around the world in tertiary education since 1995. In regions across Europe, North America, and Latin America, women are lapping men in college enrollment — but not necessarily in all majors. The STEM fields remain a problem, and in 2010, women in the U.S. earned approximately 18 percent of computer science bachelor degrees, down from a high of 37 percent in 1984.

6. 2/3 of Illiterate People In The World Are Women

As women have made gains in education, their literacy rates have also risen globally, reaching a high of 80 percent in 2012. However, of those that remain illiterate in the world, 2/3 are women.

It's no secret that women are majorly underrepresented in science, technology, engineering and math, and there is still an uphill battle ahead. The report suggests that "gender stereotypes, cultural barriers, and poor-quality education have contributed to low participation rates for women in STEM In 2010."

8. Women Are Living Longer Than Ever

As The Full Participation Report emphasizes, there are many challenges facing women around the world— but longevity isn't one of them. Since 1995, a woman's life expectancy has risen from 69 years to 73 years in 2012. Even in developing nations, there has been a 14 percent increase in life expectancy across the board.

More like this
5 Ways To Help People Impacted By Hurricane Ian In Cuba & Florida
By Emma Carey
Chelsea Clinton On The Best Advice She Ever Got From Her Mom
By Brianna Kovan
How To Politely Reject Someone Who Keeps Asking You Out
By Laken Howard and Lexi Inks
Black History Month UK’s 2022 Theme Calls For Action, Not Words
By Maxine Harrison
Get Even More From Bustle — Sign Up For The Newsletter