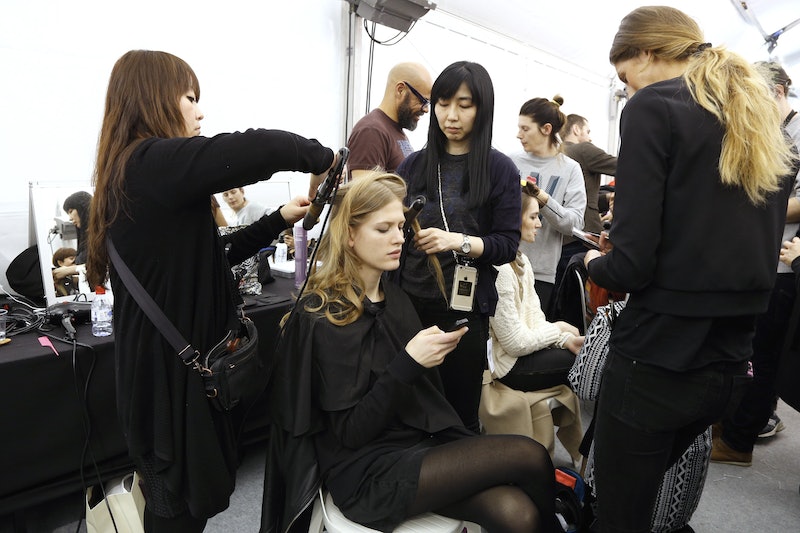 A lot of pretty things emerge during fashion month each season — clothes, beauty trends, streetstyle, models, front row celebs. There are also some questionable things as well, such as Gucci's furry slipper shoes or a trend The Cut has termed "rich girl hair." While not nearly as offensive to the eyes as the aforementioned slippers, the concept is definitely a bit confusing.

The Cut's Kathleen Hou coined the term during New York Fashion Week when she noticed designers such as Jason Wu and Prabal Gurung utilizing the look on their runways, remarking that the sleek style resembled "kind of hair you'd see on fancy Italian women in the 1980s."

Although it sounds like "rich girl hair" probably involves leading hair professionals surrounding a model's hair while she eats a croissants and texts her friends, it's actually really simple to attain. Think of it as the distant, highly sophisticated older cousin of the beach wave. "Rich girl hair" involves a middle part, with very, very loose, lazy curves. It's kind of like if #wokeuplikethis hair were extremely polished instead of slightly grungy. And, of course, you need that Allison Williams-level shine to make it truly work.

This look wasn't restricted to NYFW either — The Cut editors spotted it on the runways of Milan, London, and Paris.

For future reference, check out some straight-off-the-runway "rich girl hair" inspo from Fashion Month and beyond.

Behold, the Duchess of Rich Girl Hair. Not only is her style always on point, but her hair, whether in a low ponytail or slightly curled, never has a strand out of place. She rocked the look before any runway model.

I'm sure Tyra would be proud of the wind Kendall's creating with her hair at the Sonia Rykiel spring 2015 show.

The supermodel rocked tousled off-duty waves at Paris Fashion Week. With the messy part, it definitely looks like she #wokeuplikethat. And I wish I could, too.

American fashion designer Barbara Bui may have started the trend when she had her models walk the catwalk with very loose waves rocking her mostly black A/W 2015 line.

This look reigned supreme on the Gucci runway, too.

Dolce & Gabanna stole the show with their floral creations and natural beauty looks.

Sarah Jessica Parker's hair is always perfectly not-so-curled, yet styled in all the right ways, whether on the cover of Harper's Bazaar or climbing roofs in Dubai.

I mean, they basically nailed it.