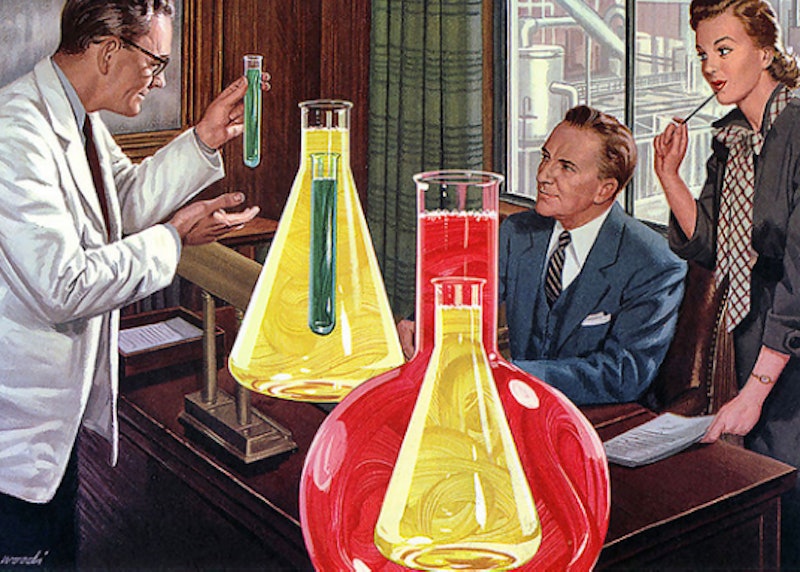 Netflix is a gold mine of procrastination tools, and I find that the documentary section is ripe with ways to waste time while feeling totally okay about it. I recently stumbled upon Discovery Channel’s “The Science of Sex Appeal,” and it was CRAZY. Here are a few of it's weirdest facts about sex and science:

When researchers took pictures of women when they were most and least likely to get pregnant and had people chose between the two, the pictures of ovulating women were consistently chosen as being more attractive. Apparently, women have a healthy glow and a fuller face when they are fertile. Even more surprising is that women’s voices get more attractive during ovulation. Ladies, plan your dates accordingly.

2. Men’s bodies repel women unless they are fertile.

Men have a hormone called androstenone that supposedly smells like musk and pee, and clusters wherever there is body hair. Even though that sounds quite unpleasant, there is a point in the female menstrual cycle when females stop finding this hormone stinky, and actually begin to like it. So for men, this hormone repels women unless they are in their baby-making prime time.

There is an intimate connection between how we smell and something called Major Histocompatibility Complex (MHC). MHC is a section of our DNA that determines which diseases our immune system is equipped to fight, and no two people have the same MHC combination. Our immune system determines which bacteria can live on our skin, and that bacterium is what makes our sweat smell unique. When tested, women have strong negative reactions to the smell of their male relatives. This is nature’s defense against incest and insurance that your offspring will have higher immunity to diseases. Therefore, women will only find a man’s smell attractive if she is fertile and if his immune system is significantly different than her own…or if he wears Axe.

4. Men will sleep with anyone.

In study in Vienna, male test subjects were exposed to artificial female copulance (pheromones released by women, especially during sex), at a dose so low the test subjects didn’t smell anything, and asked to rate photos of women. One whiff of copulance caused an immediate spike in testosterone levels, which causes men to think less clearly and therefore diminishes their ability to distinguish between attractive and less attractive women. Before you think of buying Eau De Copulance, you should be warned that it smells like rancid butter…and you should probably google it so you know what I’m actually talking about.

When studying speed dating from an evolutionary standpoint (try putting that on a business card), a scientist found that only one gender let their body expressions expose how they really feel: men. Apparently, because men only desire women based on her youth and attractiveness, they can quickly determine if they want to mate. On the other hand, women want a man who is attractive and has resources, so she usually has to act interested and ask questions to tease out this information. After speed dating, researchers found that men assessed women’s sexual interest in them as much higher than it actually was. Why is that? Scientifically speaking, if a man underestimates a woman’s sexual interest, it could lead to a missed reproductive opportunity. And that would be AWFUL.

You're welcome for the conversation starters.