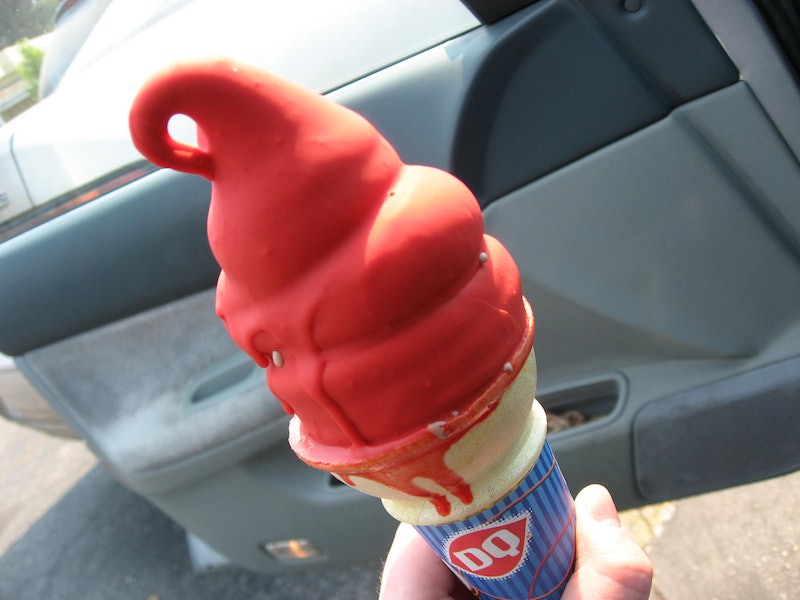 So hey. Free Cone Day at Dairy Queen is a scant few days away. How many other ways do you think we can celebrate it? How many ways can we get ourselves pumped? Because free ice cream is, as I've noted before, the best-tasting ice cream, so obviously we have to keep the party going for as long as possible. I know! How about this?: 14 random things that look mysteriously like the almighty Dairy Queen curl. I've recently discovered that those distinctive cones have a lot of dopplegangers out there, so let's take a look at a few, shall we?

Why the curl? Because that's the thing for which DQ cones are most notable. Of course, they taste delicious, too — but that wacky little curl at the tippy-top of each pile of ice cream is what sets a Dairy Queen cone apart from all the rest. Never having worked at a Dairy Queen, I couldn't tell you how long it takes to master the art of the DQ curl; I would imagine, however, that the training is extensive. I just kind of want to know what they do with all the failed curl cones when they're training up a new employee, you know? I mean… someone's got to eat them, right?

Well, whatever the case, here are 14 things I've found that look suspiciously similar to the DQ curl. Just, y'know… don't eat any of them (except the ones that are actually food). That's not going to end well.

I mean, I wouldn't exactly recommend eating a dog's butt over eating a Dairy Queen cone… but the resemblance is striking, don't you think?

But only in the first Pirates of the Caribbean film. And only if the Dairy Queen cone is wearing a hat.

Not just his hair. The entire thing. Seriously, you guys. Does Bibendum, AKA the Michelin Man, not look like a DQ cone in humanoid form?

5. Ryan Gosling Giving Us the A-OK

Or, y'know, anyone giving us the A-OK… but I bet most of us would prefer to get it from Ryan Gosling than anyone else.

I can't be the only one who likes to look out of airplanes and imagine I'm surrounded by clouds of vanilla ice cream, right?… Right?

Maybe Superman should go hang out with the Kewpie dolls. They can trade hair tips.

8. Whatever the Heck These Things Are

Apparently they are the leaves of the baby cycad fern. Just, y'know… FYI.

Preeeeeeeetty sure the inspiration for his character model was a Dairy Queen cone.

According to the photographer, the snow did this to itself after some “extreme temperature shifts.” How cool is that?

11. Merida's Mane When It's Trying to Break Free From Its Fabric-y Prison

OK, yes, I know, a lot of the items on this list are hair-related… but, I mean, come on. It's just too perfect.

It's even better when it's human-sized.

More like this
On TikTok, Tinned Fish Date Night Is The Latest Viral Food Obsession
By Emma Carey
10 Pumpkin Recipes That Are Way More Creative Than Pie & Lattes
By Rebecca Deczynski and Alexis Morillo
8 Completely Unserious Tips To Make Your Cuffing Season A Success
By Ginny Hogan
Why TikTok Is Flooded With Controversial Videos About "Pick Me Girls"
By Courtney Young
Get Even More From Bustle — Sign Up For The Newsletter