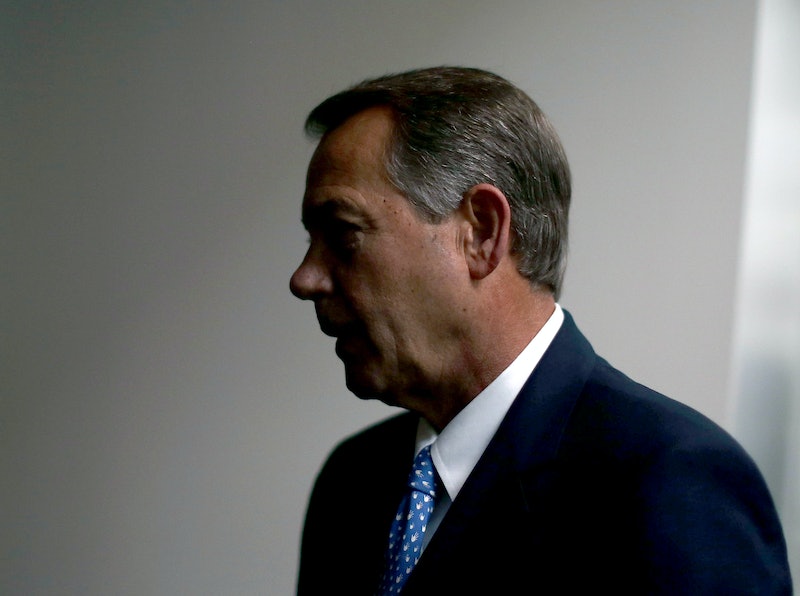 It's been a terrible, horrible, no good, very bad day for House Republicans, who as of today have officially failed to get themselves out out of the mess they created. Speaker of the House John Boehner spent all day attempting to craft a last-minute deal palatable to both the White House and the conservative wing of his caucus — and even scheduled a vote for tonight on a compromise measure — but ultimately, the votes just weren't there. Now, control moves back over to the Senate, where bipartisan talks between leadership are inches away from successfully producing a deal.

The Senate proposal, which Politico says is "essentially done," will fund the government until January 15th and raise the debt ceiling until February 7th. It contains almost nothing Republicans had initially demanded in exchange for funding the government — no defunding of Obamacare, no delay of the individual mandate, not even a token delay of the medical device tax. The closest thing to a "win" in the deal is a provision requiring recipients of Obamacare subsidies to undergo enhanced income verification, but that doesn't affect anything about the structure or funding of the Affordable Care Act, and Democrats didn't oppose it.

The Senate deal had been in the works since yesterday, but Minority Leader Mitch McConnell, who had been crafting it with Majority Leader Harry Reid, abruptly stopped negotiating today to give Boehner time to reach a deal in the House. While the Senate deal had good prospects earlier today, Boehner and House leadership insisted that the House pass its version of a deal before the Senate ... because me first!

Boehner's doomed proposal would have raised the debt ceiling until February 7th and funded the government until December 15th, giving Americans the Christmas gift of another shutdown standoff. The House deal, like the Senate deal, didn't chip away at Obamacare, which is probably why Boehner couldn't whip up the votes for it.

There's one lingering question, and that's whether or not the Senate proposal will contain the so-called Vitter amendment, which would repeal of health care subsidies for congressional aides and staffers. This also doesn't affect the general functioning of the Affordable Care Act, and because it essentially amounts to a pay cut for congressional staffers, many on the Hill are furious about it (Dave Weigel has a nice collection of anonymous, bipartisan outrage from Hill staffers about the possible inclusion of the amendment).

“[T]he actual proposal here, if taken at face value, is to simply steal money from Hill staffers, or else the economy gets it,” writes New York Magazine’s Jonathan Chait. “It's quite a comedown from the original plan to liberate America from Obamacare socialism.”

The Vitter amendment was included in the House deal, but it's unclear whether Senate leadership put it in their compromise. However, President Obama has apparently said privately that he'll veto it, so it seems rather likely that it won't be included in the Senate deal.

Meanwhile, as Republicans were eating themselves alive, the credit ratings agency Fitch put the United States’ debt on “rating watch negative,” because even though it believes Congress will ultimately raise the debt ceiling, the protracted battle over it “risks undermining confidence in the role of the U.S. dollar as the preeminent global reserve currency, by casting doubt over the full faith and credit of the U.S.”

A Pew survey out today also shows that Americans continue to primarily blame Republicans for the impasse by an eight-point margin. Then again, in the same poll, 23 percent of people said that the debt ceiling doesn’t really need to be raised at all (it most certainly does), so take their political analyses with a grain of salt.

Perhaps the craziest news for the hard right today came out of Texas, as Lieutenant Governor David Dewhurst publicly said he supports impeaching the president. The charges Dewhurst cited were “trampling on our liberties” and “what he did in Benghazi,” which we imagine would have to be specified a bit more before being considered by the House. Dewhurst is probably the highest-profile figure to call for the president’s impeachment so far. (Thankfully, despite his propensity to throw his weight around, he’s powerless to do anything about this.)

It's unclear whether Congress as a whole will have enough time to pass the emerging Senate deal before midnight tomorrow, but leadership is hopeful.