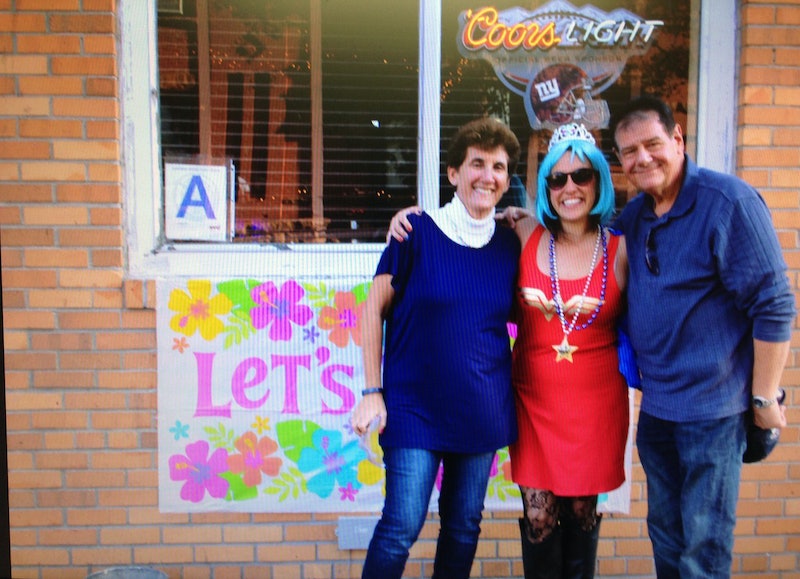 Some of us only wear costumes for Halloween, but not Jessica Moskowitz, a digital producer for CNN. Last October, a couple days before surgery to remove her brain tumor, she decided to throw a party to celebrate her life, loved ones, and living — and dressed up as Wonder Woman for the occasion. Of course, the superhero is renowned for her superhuman combat skills, skills that seemed to have a positive effect on Moskowitz.

Last October, doctors successfully removed the orange-sized brain tumor that Moskowitz had been diagnosed with just a month earlier. Though it was benign, she learned that if it kept growing and was not removed, it could block the flow of spinal fluid.

Her pre-surgery party was held a few days before Halloween and also served as a pre-birthday party for Moskowitz.

"Ghosts and pumpkins mingled with birthday decor," Moskowitz said in her CNN post. "Although I was born at the end of November, I wanted to cover all my holidays since I had no idea what the future would hold."

Mainly, the party seemed to celebrate living, and not taking it for granted. "We all laughed and danced for hours, and at the end of the party, whoever was left did the Hora," she said. "We ran in and out of a circle, joyfully raising our hands in the air."

Moskowitz's surgery was a success; however, not all brain tumors are treatable. We all remember Brittany Maynard, the 29-year-old who was terminally ill with a malignant brain tumor and died via the Death With Dignity Act last November.

In addition, according to the American Cancer Society, brain tumors cannot be prevented. Aside from limiting exposure to radiation, there are not known environmental or lifestyle indicators.

Others say cancer (often associated with tumors) can be prevented. "As many as 70 percent of known causes of cancers are avoidable and related to lifestyle," said Thomas A. Sellers, PhD, who is the associate director for cancer prevention and control at Moffitt Cancer Center in Tampa.

"If I was ever lonely or uncertain about my place in the world before, having this experience was a relatively quick way to discover that I have tremendous love and support in my life," Moskowitz said.

After her surgery, she had to attend inpatient and outpatient rehab, from practicing her speech to doing occupational therapy. And, she was even named February's "Patient of the Month."

"The experience has given me confidence in my resilience and more perspective than before on the importance of living in the present, because things could always be worse — completely out of nowhere and totally unexpectedly," Moskowitz, now almost 30 years old, said. "My zest for life itself — the good and bad — is so much stronger than before."

I don't know about you, but I think trying to maintain a healthy lifestyle and diet is worth a try. Even though we can make changes to the way we live if we so choose, and dress up like the best and baddest superhero, it's what's on the inside that counts — our attitudes! Moskowitz is an example to us all.