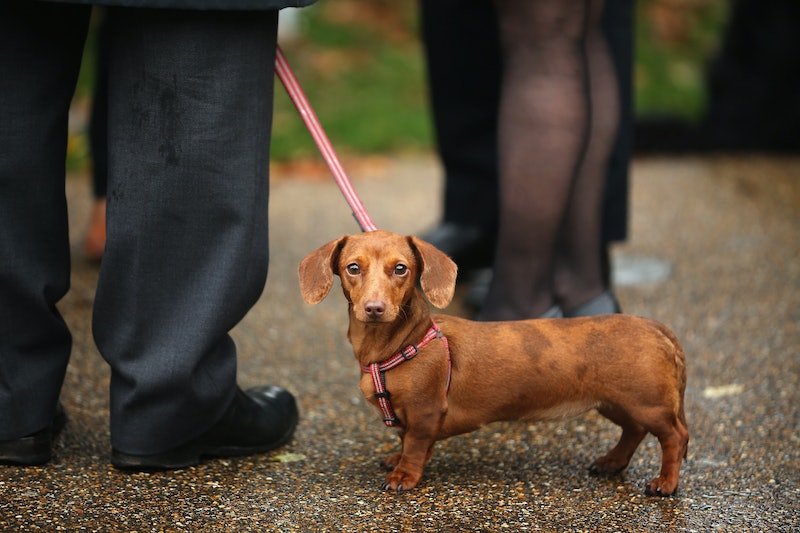 I've always been a little uncomfortable with those "dramatic weight loss" stories, mostly because I tend to get a pretty fat-phobic vibe from most of them — but it turns out there's one such story even I can get behind: The weight loss journey of Dennis the dachshund. Especially since I'm pretty sure the weight he'd reached under the care of his first owners might border on animal abuse. But hey, he still gets a happy ending, so I'd call that a win in the end.

Dennis was adopted in 2013 by nursing student Brooke Burton. He had previously been owned by one of Burton's relatives, who reportedly was a hoarder and overfed Dennis with human food. All those burgers and pizza might sound like doggie heaven, but it also resulted in the miniature dachshund reaching a whopping 56 pounds. Not good. In fact, poor Dennis was so obese that he got out of breath just walking a few feet — and had so much extra fat that he often tripped over it. Like I said, it just sounds cruel.

Fortunately for the little guy, once Burton adopted him she started getting him into shape. She fed him only dry dog food and began taking him on long walks. And of course making sure shower him with love, too.

As a result, Dennis went from looking like this:

Over the course of the past two years, Dennis lost a total of 75 percent of his body weight and went from weighing 56 pounds all the way down to weighing 12. He had several surgeries to remove the excess skin left over from his heavier days, which Burton was able to pay for via crowdfunding.

When Burton first adopted Dennis, she said that he was so overweight she wasn't even sure what breed of dog he was, and was suffering from dehydration and skin infections related to his weight. Given all that, combined with the mobility issues, it's not surprising that Dennis is much happier now.

“In the beginning, you could tell he was very depressed, that he really didn't feel good at all," Burton explained. "He didn't have much of a personality. After he lost weight, this bossy little demanding man popped out. He's into everything, he wants to play with everybody."

It's a transformation that's enough to warm anyone's heart. Just look at this little guy.

So cute! You keep being awesome, Dennis!