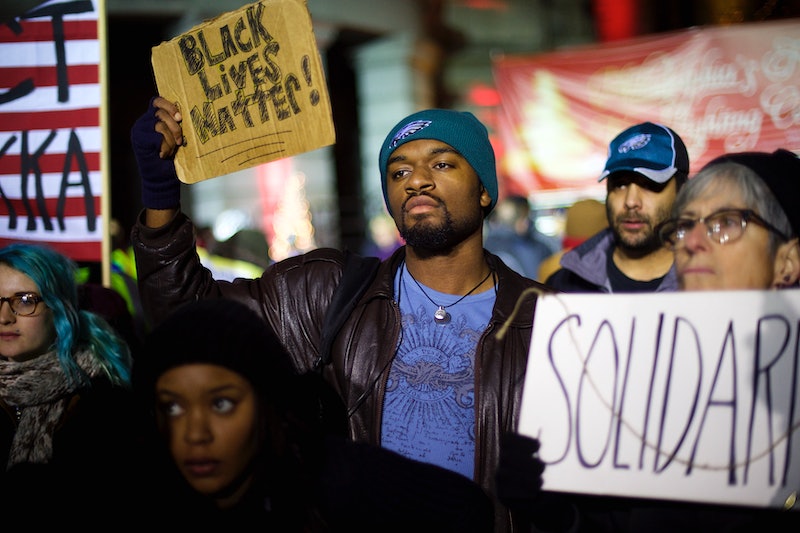 When Slate published an article in 2010 on the ways in which the black community uses Twitter, it was met with backlash — and understandably so. The piece painted #blacktwitter as a digital space primarily where young black people use hashtags like #ifsantawasblack and #ghettobabynames as forums in which to spout controversial, raunchy, and sometimes racist banter — and it largely overlooked the enthusiastic activism, thoughtful conversation, and productive camaraderie that are defining characteristics of Twitter's black community. This week's SxSW Interactive conference in Austin hosted a panel entitled "The Bombastic Brilliance of Black Twitter" that discussed and celebrated the parts of the black Twitter community that have absolutely nothing to do with topics like #ghettospellingbee, #hoodhoe, and #atablackpersonfuneral.

Hosts Dr. Kimberly C. Ellis, an artist and scholar of American and Africana studies, and Meredith Clark, a journalist and educator, highlighted the productive discourse that happens among black Twitter users (see #bloggingwhilebrown, #smallbizchat, #blacklitchat), the messages of love and community that characterize those conversations (see #blkbfing, #nerdland, #blackSXSW) and, most importantly, the influential activism that has started on Twitter and made its way into our collective consciousness. #blacklivesmatter, #icantbreathe, and #iftheygunnedmedown were nerve centers of the rage and fear felt by the black community (and beyond) after the deaths of Michael Brown, Jordan Davis, and Eric Garner, and that online activism fueled real life action.

Twitter's black community can be progressive, influential, and highly motivating. It can be a vivid window into the struggles of the black community, and an inspiration for activists of all kinds.

In reaction to the Slate piece, "we burst onto the stream in reaction to mainstream representation of who we were," Clark said. For proof, here are nine Twitter accounts (of hundreds) of the platform's black community who you should be following. Like, today.

Dr. Kimberly C. Ellis first noticed the power of the black community on Twitter when the G20 Summit came to Pittsburgh and she and follow community members became among the first people to report the news of riots and gassing to the masses.

Ellis led the SXSW panel, and now "engages social media to promote a new age liberation ideology undergirded by revolutionary love." She says "of all the things black Twitter talks about, love is one of the primary messages."

Co-host Clark is an assistant professor at the University of North Texas, whose UNC Chapel Hill dissertation focused on the emergence of black Twitter.

After the publication of Slate's offensive article, style blogger @innyvinny rightly pointed out that "black people are not a monolith," and certainly should not be treated as such by the media.

This account shares news that's pertinent to black, asian, and hispanic readers — from race relations and marginalization of black communities, to profiles on artists like Kehinde Wiley and commentary on the SAE scandal.

Mark Anthony Neal is a professor of Black Popular Culture at Duke, and provides a "contrarian view of blackness" on his weekly show Left of Black. He posts his unique views and leads readers to awesome interviews and essays posted on his blog

The Root online magazine is an outlet for black voices, and it comments on national news of the day, hyperlocal pieces, inspiring stories from the black community, prominent celebrity figures, diversity in entertainment, and a lot more.

Aisha Lewis-McCoy is an advocacy lawyer for victims of sex trafficking, and she uses her Twitter feed as a place to demand equality, lift up black voices...and talk Empire and Scandal. The website For Harriet named her as one of the most inspiring black female voices on Twitter, and they weren't wrong.

Cheryl Contee's company Fission Strategy works to use social media to affect change, and she blogs about politics at Jack and Jill Politics. She pushes for fair representation of minorities in business and entertainment, and publicly calls for change.

These are nine of HUNDREDS of influential and inspiring voices — for more, Clark suggests you check out For Harriet's list of inspiring black women on Twitter and Hip Hop Wired's Black Twitter 100.