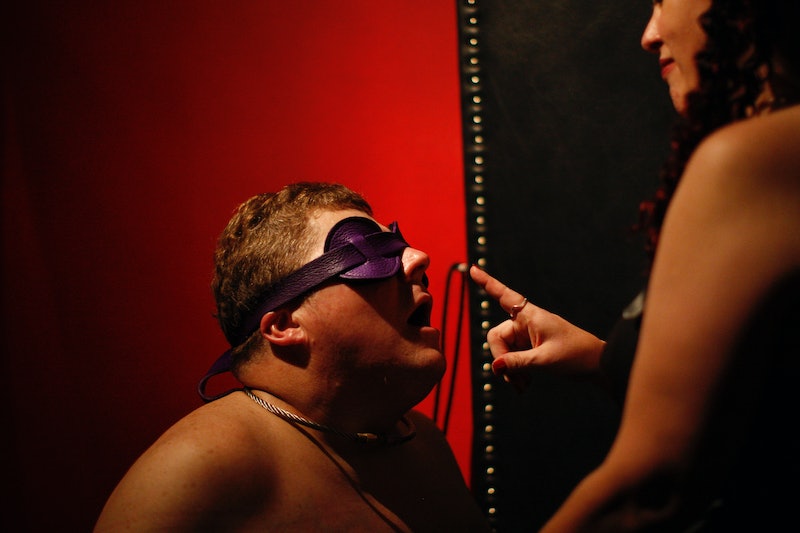 As a plus-size woman, I'm well aware of size-discrimination in the workplace and that there's some jobs that I'll never get: Navy Seal, Olympic gymnast, and skinny jeans model. To get a job, I need to widen my job search, and think outside the lines of traditional employment.

I still wasn't entirely convinced that I should pursue a career in submission and domination so I weighed the pros and cons.

1. Con: It takes energy to beat somebody into submission and I'm lazy. I don't have enough discipline to go to the gym, let alone train a panty slave.

2. Con: I'm too polite to be verbally abusive, and too self-conscious of my body to use someone as human furniture. "Sit on your back, really, have you thought that through?"

3. Pro: Instead of punching a time clock, I could punch my client.

4. Pro: I wouldn't have to commute if I turned my spare bedroom into a dungeon. Tax write-off!

5. Pro: How great would it be to have a slave pay me to have the honor of cleaning my bathroom...with a toothbrush...naked.

More like this
Black Women's Equal Pay Day Highlights An Upsetting Problem
By Brandi Neal
The 19 Best Tweets & Memes About Bisexual Awareness Week
By Lexi Inks
Breeding Kinks Have Been On The Rise Since Roe V. Wade Got Overturned
By Lexi Inks
Are Quality Time & Gift-Receiving Love Languages Compatible?
By Lexi Inks
Get Even More From Bustle — Sign Up For The Newsletter