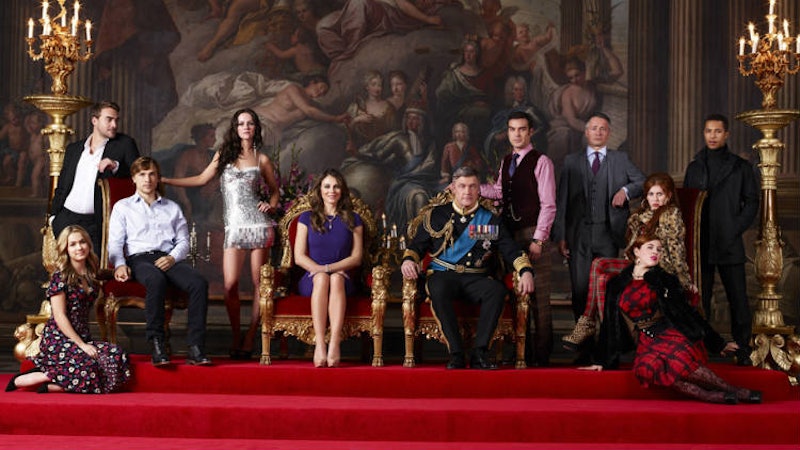 Time to get down off your high steps, B. The Royals are coming to E! this Sunday, March 15th at 10pm. In case you haven't been in the loop, The Royals is loosely based off of the royal family, and that, of course, includes the costumes. The series' main character (played by the ageless Elizabeth Hurley) is a fictional queen of modern day England whose children make scandalous headlines in the tabloids. Yes, it's an exaggerated take on highborn-living, filled with secrets, sex, and gossip that we'd never see from the real royal family. But ever since Gossip Girl ended in 2012 and The Carrie Diaries was recently cancelled, I believe there has been a serious void of decadent style on TV. The answer to my problem? The Royals.

Rachel Walsh is the costume designer for the upcoming E! show. Prior to taking on this project with E!, Walsh was the assistant costume designer for the film Great Expectations in 2012. Walsh seems very excited to be heading her own project and optimistic about its wardrobe potential. Walsh told the New York Post on Monday, "The looks for this show are limitless. It’s a mixture of cutting-edge contemporary for the younger characters, classic elegance for the older.” Mostly every character's fashion is based off of the real styles of someone either in or associated with the royal family — all except for Elizabeth Hurley's character, of course.

Elizabeth Hurley plays Queen Helena who is only royal by marriage but Walsh says that this character is the powerhouse. Rightfully so. Seeing as how Queen Helena is the main character, her wardrobe must stand out from all the rest. The costume design for Hurley's character was inspired by Dynasty matriarch, Alexis Carrington. Obviously the shape of style has changed since the '80s. You won't find any overwhelming shoulder pads on Queen Helena. However, you will see strong, bold, structured, and elegant silhouettes. Expect to see Queen Helena wearing designers such as Victoria Beckham, Vera Wang, and Dolce and Gabbana. Only the best.

The character Princess Eleanor, played by Alexandra Park, has got some edge a la Jenny Humphrey to her. Walsh prefers to call her a "gothic fairy princess." The real royal inspiration for her wardrobe is allegedly royal ex-girlfriend Cressida Bonas. Naturally, you should expect to see an irresistable mix of high and low fashion. You'll see Princess Eleanor in brands like Top Shop and designers like Alexander McQueen.

Sophie Colquhoun plays the character Gemma who is based of off our very own Kate Middleton in every way, especially her wardrobe. This is the "It Girl" on the show. She's your "Chelsea" girl. I'm thinking that she's going to be a Serena Van der Woodsen-meets-Blair Waldorf love child. She loves the spotlight, but is also more conservative than our former party child, Serena Van der Woodsen. Kate Middleton is without a doubt a style icon who favors middle-range clothes, nothing ever too high-end. Similarly, expect to see Gemma in Duchess-approved brands like J. Crew, L.K. Bennett, and Stella McCartney.

It's true, The Royals has very big shoes to fill since Gossip Girl has been off the air. One thing The Royals has done already that Gossip Girl didn't is secure a second season before their pilot even aired! Dont worry, B! We'll let you keep your precious headband but the tiara goes to The Royals.