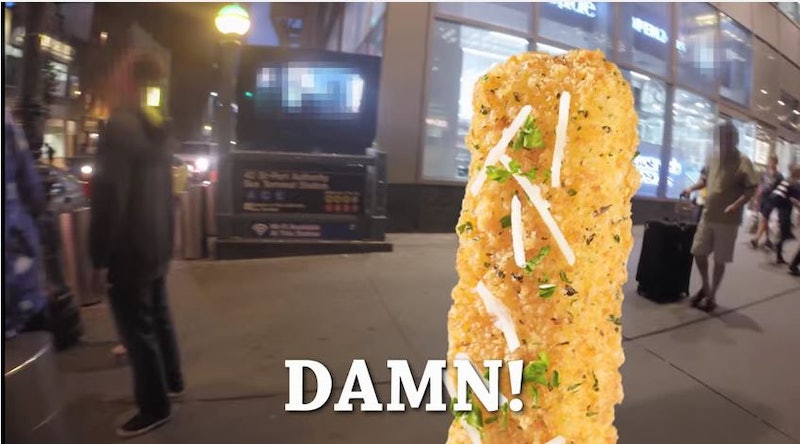 A new ad from restaurant chain TGI Fridays is a "hilarious, light-hearted" look at the street harassment of fried food items. Confused? Of course you are, because this #AppCalling commercial is founded on a ridiculous premise (come on, everyone knows mozzarella sticks can't walk) and worse, it trivializes and makes light of the very real, threatening practice of street harassment. The video mocks the now-famous video where a woman walked around Manhattan and listened to street harassment for ten hours. By way of lame explanation, TGI Fridays' marketing officer told Mashable that "no apps were harmed as a result of this video" and said the company believes "app calling, not cat-calling food is a funny premise."

On its YouTube page, TGI Fridays tries to remind us that it doesn't believe that it's OK to yell "DAMN!" at a woman on the street:

Catcalling is offensive. But #AppCalling, that’s a whole different deal. With Endless Choice, every round of Endless Apps can be a different Endless App!

Oh, OK then. So as long as it helps you sell buffalo wings and bruschetta bites or whatever these apps are called, mocking a pervasive problem like street harassment is totally fine, I guess, and it's not irritating at all to watch scenes lifted from the first video, but with a (sexually harassed, deeply uncomfortable) woman replaced by a fried food item. There is not enough side-eye in the world for this.

Obviously, TGI Fridays is either confident its customers have as dumb a sense of humor as its marketing team, or, it's trolling the entire internet into expressing enough outrage to make the video go viral (an effort I'm VERY sorry to be helping, for what it's worth). But even if the video gets a million views, is that going to help the restaurant sell more appetizers? Or is it just going to make people feel comfortable that, after taking a collective moment recently to discuss the seriousness of casual verbal assault against women, it's now "okay" to joke about it. Because, honestly, where is the comedic aspect of this video rooted if not in parodying how seriously we took that original viral catcalling video? We DID take it seriously, and should have, and an ad like this effectively neuters the gravity of the underlying issue.

This is not the first time TGI Fridays has come up with a slightly icky gimmick: It dispatched "mistletoe drones" in its restaurants in the UK last year, in an attempt to pressure couples to kiss (under the mistletoe, get it?!) as they were just trying to enjoy their meals. Because nothing says romance like the whirring of an insistent quadcopter with a kiss cam attached to it hovering over you, amirite, ladies?

Let's not lose sight of what it was like watching clips from 10 hours of street harassment in the original video, because what the TGI Fridays marketing team fails to grasp here is that the men yelling out "Damn!" and "Looking good!" weren't paying compliments to the woman in that video—they were trying to intimidate her. Street harassment (or catcalling, or whatever you want to call it) isn't about making a woman feel good about herself. In the end, it's about making her feel less than human, like an object to be ogled, an object which strangers are entitled to view, judge, comment on, and impede the personal space of, without consent or reproach.

The most likely outcome of this video won't be to sell more appetizers, but will almost certainly leave a lot of TGI Fridays' customers and would-be customers with a bad taste in their mouths.