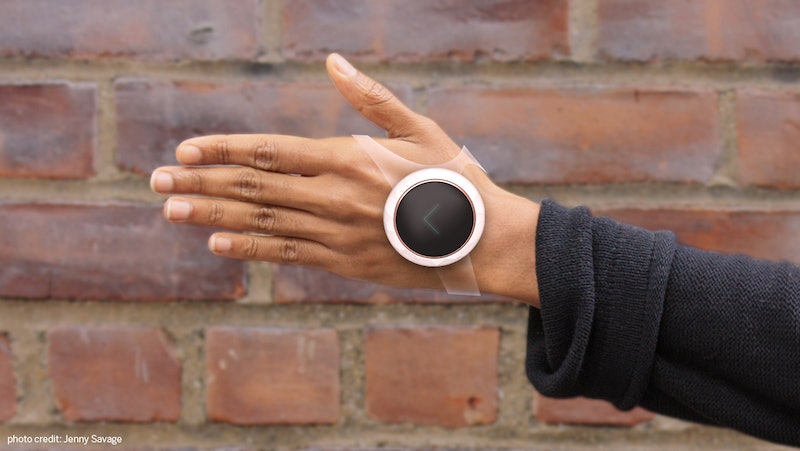 Remember those glasses that had lenses that changed color as you walked outside? That was just the beginning of wearable technology. And now with the Apple Watch becoming available, making wearable tech a “thing” as of late. The newest in wearables? Drones. Wearable drones have the potential to become a reality as production costs decline. At least, this is the topic of discussion at South by Southwest Interactive.

A few months ago my Bustle colleague Tyler Atwood wrote about Nixie, a drone camera, that you'd wear on your wrist before it flies around taking pictures of you (because a selfie stick is so 2014) — and that is just the start of high-tech, drone fashion. It never seemed likely that you would be walking down the street, seeing someone’s sleeve change textures as their arms moved, but that technology exists now, and not just in the mind’s of the Hunger Games costume designers.

While it will still be a long time before people start wearing drones, the technology can come into play now, thanks to 3D printers. Designer Pauline van Dongen developed (designed? What is the proper terminology for technological fashion writing?) a sleeve that changes from a 3D texture to a 2D texture as you move your arms. How exactly? I have absolutely no idea, but this video from the designer shows it in action.

Other drone technology/fashion hybrids will be discussed at South by Southwest Interactive in Austin this week, where one of the themes is Fashion & Wearable Tech. Frog Design Inc., who will be presenting at the conference, has designed many wearable tech prototypes that seem like they are straight from a science-fiction movie, including a device that would sit on your shoulder detecting air-pollution and will fly in front of your face to become an air filter, and a bracelet that will become a floating guide, leading the way if you get lost. Crazy stuff.

IDTechX predicts that wearable technology, including items such as jewelry, belts and shoes, will be a $70 billion market in 2024. That’s less than 10 years away. Think about it. However, I think it will be many years before fashionable technology becomes mainstream and if/when it does, I will probably be one of those curmudgeons who moves to the woods, because a necklace that flies above your head, turning into an umbrella when it rains, although cool, is just too much for me to handle.