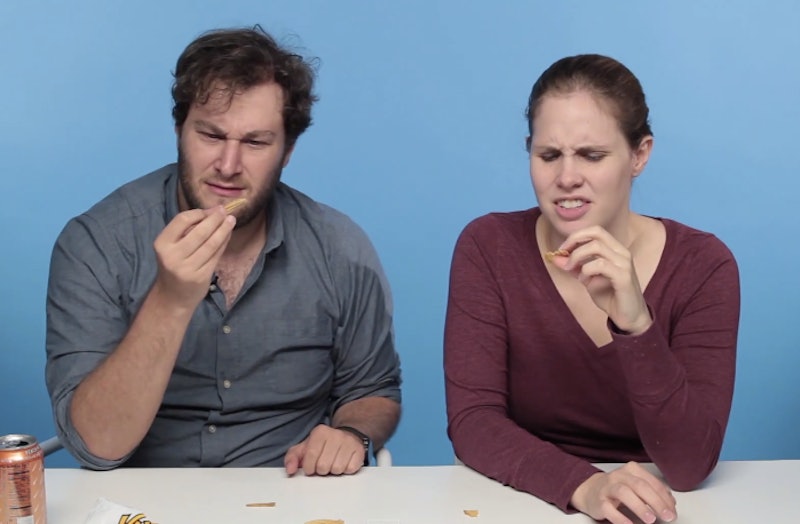 I have long been a fan of Buzzfeed's "Americans Taste [Assorted Non-American Foods] for the First Time" videos. Their latest is "Americans Taste Test Indonesian Snacks", and once again, it makes me think of my hero and power animal Andrew Zimmern in the opening of his Travel Channel show Bizarre Foods: "What's common cuisine in one country can be an exotic edible in another." On their own, these videos can sometimes give you the icky feeling that you are being judgmental and smug about what other people eat. Personally, I like to take a more universal approach to this: What makes good food, maybe even more so than what makes good art, is entirely subjective. What we're raised eating and what is made widely available to us in our cultures inform our sense of what is "acceptable" food, what foods we should eat when, and what is "gross".

When I was 16, a French exchange student came to live with my family for a few months. His first weekend in America, my mom made pancakes (as was her wont). I'll never forget the nervous, trying-to-be-polite-but-obviously-disgusted look on his face as he mumbled "Umm...no. No...no thank you. That's...dessert." (He had a similar reaction to peanut butter, though at that point he wasn't trying as hard to mask his contempt.)

My many trips through various Asian grocery stores have assured me that fish as a snack food is way more common throughout Asia than in the U.S. In general, I'm not a big fan and neither were the taste testers.

I will admit: I'm a 12-year-old and the name of this snack made me giggle.

I could see this one catching on, merely because a lot of people I know are hopping on the seaweed-based snack train.

Apparently these chips are made out of cassava, which is a root. At one point in the video, one of the testers quips, "Do you guys just not have potatoes in Indonesia?" Well, sir, I checked the World Potato Atlas (which is, hand to god, an actual thing) and potatoes were introduced in the late 1700s by the Dutch, but never took off as a mainstay of the Indonesian diet due to fact that the climate is not really suited for potato production. Also, not everyone needs potatoes, bro. Just eat the damn cassava chips.

Back into the fish flavored snack domain. Testers described this as having the consistency of stucco.

The whole video can be found below. And, to keep us in perspective and humble, I would recommend viewing it alongside this video of Korean girls eating American snacks, to remind us that these horrified and curious reactions definitely go all ways.