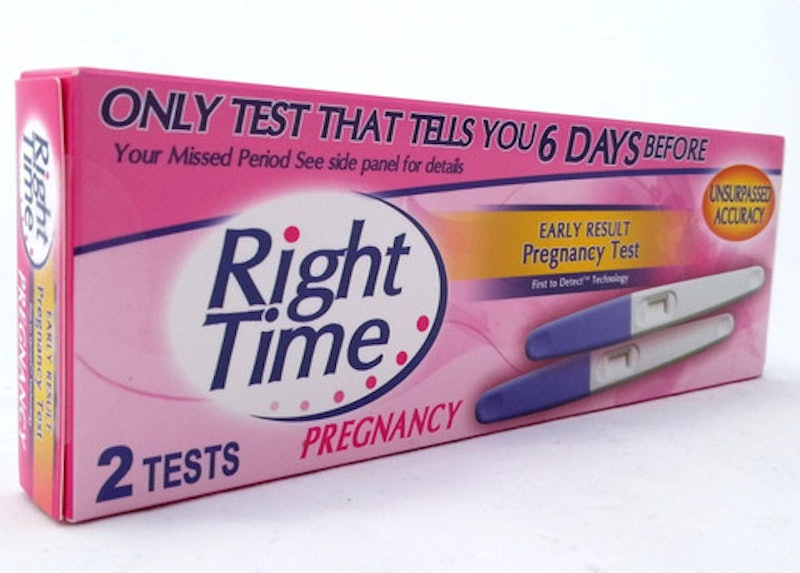 I have to think there are two possible reasons why someone would use the Right Time fake pregnancy test kit, which looks exactly like your average home pregnancy test, but is fake and always comes out positive: Either to prank your friends / significant other, or two actually try to convince someone you're pregnant when you're not. I really hope most of the people buying this are aiming toward the former use, since the latter is kind of bleak to consider. I guess if you assume that all women want to do is trap men into marrying them and will do anything in order to get knocked up and in doing so will be able to finally force their men to settle down, then this might be your idea of a hilarious joke. If, however, you consider that an archaic notion based on gross, outdated stereotypes about gendered perspectives on parenthood and commitment, then you may wonder why a woman would want to pretend or fool someone into incorrectly believing she is pregnant. Such a buzzkill, I know. Here's how it works, according to the product description on Amazon:

The Right Time prank pregnancy test was designed to give positive results under any circumstance and is a great gag for you to play on your husband, boyfriend, girlfriend, parents or anyone else that you feel like joking. The tests could be used as a joke at a bridal shower, bachelorette party, or any other shenanigans you may have in mind.

Well, no one mentioned there would be shenanigans involved—that changes everything! Ha, no it doesn't. Look, I get how this could be a funny joke between girlfriends, but I have a gut feeling that's NOT the most common reason for these tests being purchased. And not to sound like a humorless scold, but why would it be funny if your partner had an unwanted pregnancy? There's this whole debate going on about reproductive rights here in the 21st century, where the rest of us live. This seems like a wildly tone-deaf idea of a joke.

Even the packaging for the Right Time "test" looks legitimate, complete with a pink box with a promise of "unsurpassed accuracy" printed on it.

Of course, there's a whole other group who I imagine would think this "joke" pregnancy test is even less funny: All the women who want children but, for any number of reasons, aren't able to get pregnant or carry a pregnancy to term. Even with the latest medical technology, trying to conceive is not easy for a lot of women, and it's not cheap. According to The New York Times, an average in-vitro fertilization treatment costs more than $12,000, and not everyone gets pregnant on the first cycle, if ever.

So if your idea of a great prank is to scare someone with news of a pregnancy (and judging by the reviews on this product's Amazon page, there are a few people who consider it comedy gold), then more power to you. Let's just hope these things are being used for more good than bad.

More like this
The 19 Best Tweets & Memes About Bisexual Awareness Week
By Lexi Inks
Are Quality Time & Gift-Receiving Love Languages Compatible?
By Lexi Inks
The Differences Between Polyamory & Open Relationships
By Lexi Inks
10 Ways To Be More Empathetic To Your Partner
By Raven Ishak and Lexi Inks
Get Even More From Bustle — Sign Up For The Newsletter