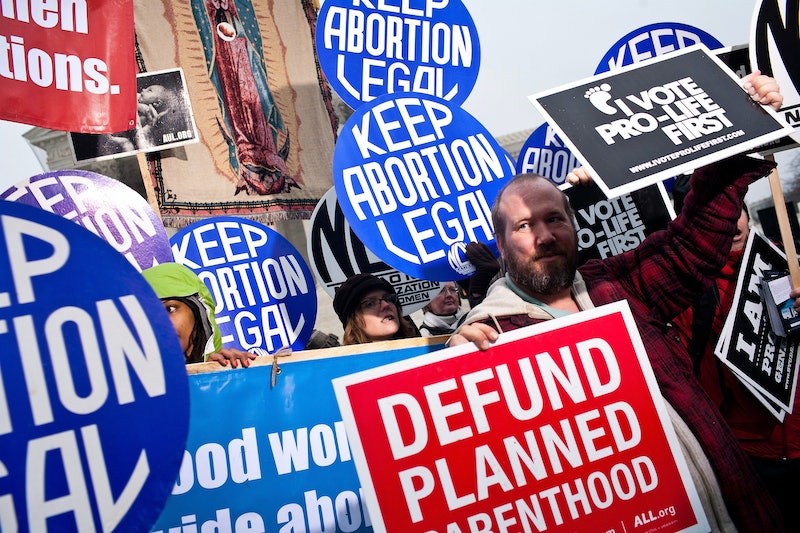 It's no secret that the pro-life movement doesn't have the best track record when it comes to understanding the female reproductive system — or female biology in general. So maybe it's not such an incredible shock that a "crisis pregnancy center" told a woman her IUD was a pregnancy during an ultrasound. Not a shock, but still pretty outrageous.

Fro those who have fortunately never heard of the phenomenon of "crisis pregnancy centers," they are the exact opposite of what they sound like in that they're terrible places to go if you're having a crisis and they apparently can't even tell what is and is not a pregnancy. Though they're designed to be confused for legitimate reproductive health clinics, crisis pregnancy centers are pro-life institutions that encourage pregnant women to carry pregnancies to term, often using guilt, religious intimidation, and outright lies about the risks and costs of pregnancy and abortion. And, unfortunately, they're becoming more and more common throughout the country, often setting up shop next to legitimate clinics or near college campuses or high schools.

Not only does their rigid agenda obviously prevent them from providing actual quality care to women, though, they also apparently aren't that great at understanding pregnancy anyway. During a recent investigation by NARAL Pro-Choice America, one 19-year-old volunteer who goes by the pseudonym Cristina says that during an ultrasound at two different clinics, the staff misidentified her IUD as a baby.

The whole incident just underscores the fact that crisis pregnancy center staff isn't trained in reproductive health — and in fact doesn't need to have any health care training at all. And given the fact that actual medical professionals take oath to do what's best for their patients, not their own politics, I'd say it's a safe bet that people with real training are few and far between in such places.

Never-the-less, in a time when states are placing more and more strict demands on clinics that provide legitimate reproductive health care, including abortion, crisis pregnancy centers not only aren't getting shut down, but in many cases actually receive state funding.

So how is it that it's supposedly irresponsible to allow abortion clinics to operate if they don't have, for instance, doctors affiliated with local hospitals, but it's perfectly OK to let people with no required training dispense blatantly inaccurate medical advice? How are facilities staffed by licensed doctors and nurses being targeted for closure, but facilities staffed by lying non-professionals are given funding? By any ethical standard it makes no sense.

But of course we're in the midst of a war on women where plenty of lawmakers apparently just don't think women have a right to accurate information about our own health.

Can we shut these things down already?