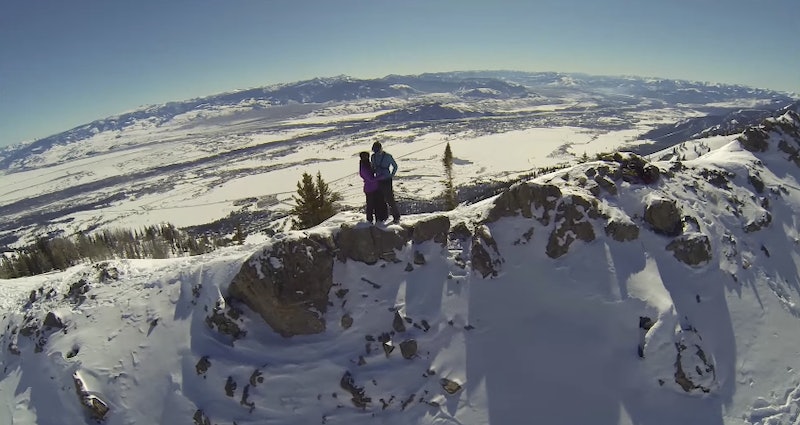 OK look, I will fully admit that I really wanted to dislike this video of a guy proposing to his girl on top of a mountain. I was so ready to hate it. As soon as I read the title, every cynical bone in my body (which is to say, most of them) was screaming out that it was going to be exactly the kind of thing an obnoxious rich guy who likes to play with his GoPro camera would do. I assumed it would all be too rich, too cute, too deliberately viral. To top it all off, he recorded the entire thing using a camera on a drone, which is so "of the moment" that I went into this viewing experience fully prepared with eye rolls and snarky comments. But, I will admit, forgot one little thing: Most people, when they are proposing to someone / are being proposed to, no matter how annoying they are in life, nor how unnecessarily over-the-top the set-up is, are thrust into a decidedly vulnerable, genuine position that (albeit temporary) renders them utterly unhateable. This endearing realness caught me off guard.

The woman in the video had to know something was up; I mean, he took her to the top of the Jackson Hole ski resort on Wyoming and had a drone flying around, and, if you watch the video carefully, there's also a cameraman not far from them. This is definitely way better than getting a proposal at the Rangers game on the jumbotron, and you can't beat that scenic vista.

The unnamed guy, who posted the video on Reddit under the username "wiztode", wrote that his girlfriend had told him not to bring his drone on their snowboarding trip, but he did anyway. She seemed OK with the end result.

It's not bad as far as public marriage proposals go, and the guy obviously thought through all the details. But does it rank in the top five most-romantic proposals? The ones that usually get me misty-eyed are a little more dorky, like the guy who took a video of himself every day for a year asking his girlfriend to marry him.

I've never been totally on board with the whole public marriage proposal thing, because I always think it puts a little too much pressure on the person being asked to say "yes". Proposals just feel like things that should just be private, done in a way that is personal to the couple, rather than with a "hey, look, we are getting married!" statement. However, it looks like the public marriage proposal is here to stay (oh, look, my eye rolling capabilities just came back!), and it's probably to be expected that we'll see more drones involved. But it will be hard to top this guy (although I have a feeling that isn't going to stop ring-armed attention-seekers everywhere from trying).