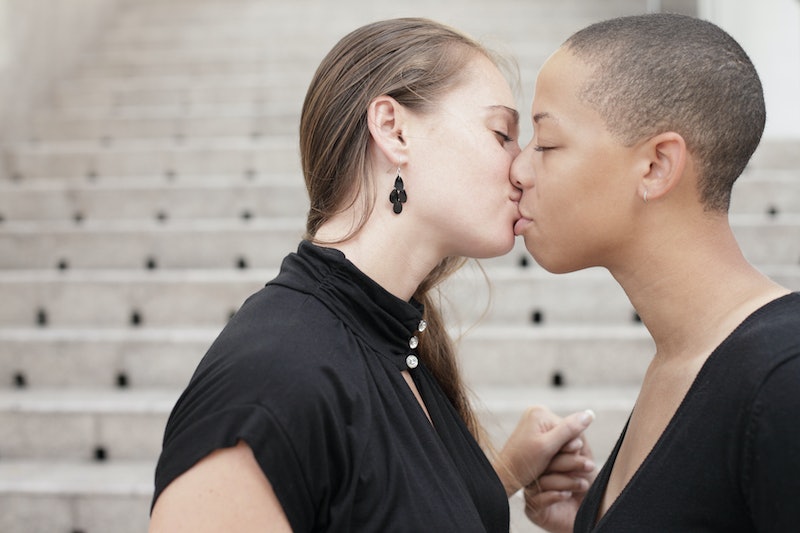 Even as LQBTQ rights and causes are making strides— think the recent Planet Fitness stance on transgender locker rooms — there are still instances that remind us how much more work needs to be done. The most recent of these instances happened in Paris, where a lesbian couple was humiliated for kissing at a train station.

According to reports, the couple was embracing and saying farewell when a train guard began yelling at them for kissing. The yelling went on for several minutes, and the guard told the couple that their actions “cannot be tolerated.” The angry, homophobic guard also told the couple that it would have been okay for a straight couple to kiss.

One woman on the receiving end of this rant, Mirjam, joined forces with the organization All Out (which she had already been a part of), in order to call out Thalys International, the European train company that owns and operates the station, for the guard’s intolerant behavior. Mirjam called the experience “humiliating” and asked members of All Out and supporters of gay rights to sign a petition “to denounce this anti-gay customer service - and train staff to treat everyone the same, whether lesbian, gay, bi or straight.”

Mirjam reached out to the corporate offices of Thalys International, but did not receive a response until yesterday, when her petition had reached 60,000 signatures. Because of Mirjam’s actions, the company will now have equality trainings and use her experience to make agents more aware. Still, it's upsetting that Mirjam had to make this much of an uproar to get a response to her poor treatment. Thalys actually featured a same sex couple in their advertising campaign a few years ago, which would lead us to think that the transportation company would be especially responsive to complaints of homophobia and this type of incident wouldn’t happen in the first place.

This story is a good reminder that even though a brand has LGBTQ ads, it doesn’t necessarily mean that they are LGBTQ friendly. While unveiling an LGBTQ friendly ad can be a political statement of support, it’s also a financially smart one. Promoting themselves as an LGBTQ company makes brands more aligned with millennial values, and helps brand tap in the buying power of American LGBTQ adults, which was estimated to be around $790 billion in 2012, according to the Huffington Post.

So while we are happy to see LGBTQ ads that celebrate all different types of people, lets be sure that these brands are actively supporting the LGBTQ community, and not just profiting from them.