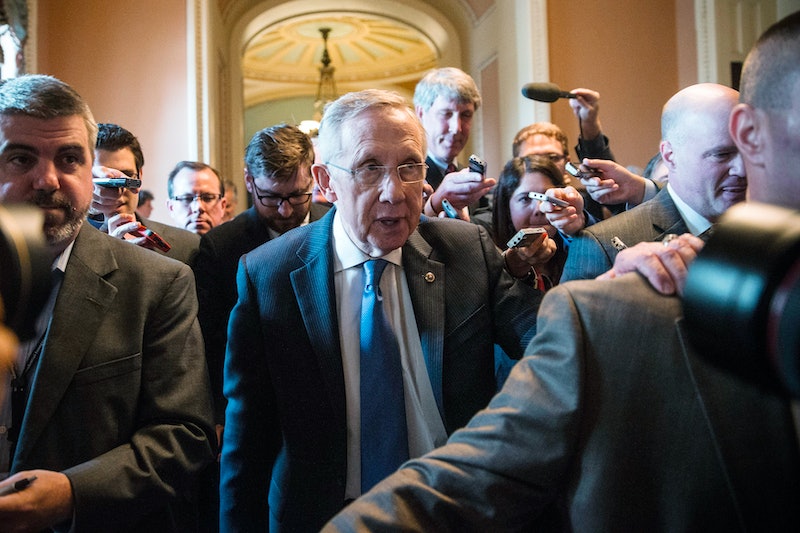 The Senate has reached a deal on the debt ceiling. The upper chamber announced a deal when the Senate reconvened at noon on Wednesday, ending weeks of uncertainty over the federal budget and the debt ceiling. "The compromise we reached will provide our economy with the stability it desperately needs," said Senate Majority Leader Harry Reid Wednesday. A vote is expected to take place today.

After the announcement, relieved Senators thanked one another and expressed hope that the 14 core members of the compromise group would be able to work together again on other issues.

When it adjourned at 10 p.m. on Tuesday, aides to Senate Majority Leader Harry Reid and Minority Leader Mitch McConnell were finishing the language on a bill that will resume funding the federal government and raise the debt ceiling at least temporarily, sources told Politico.

Members of the upper chamber didn't have to reconvene until noon on Wednesday, but it's unlikely that any of them slept soundly Tuesday night. Even if the Senate passes a bipartisan funding bill, the legislation faces an uphill battle in the House of Representatives. The House Republicans, who hold a majority of seats in the lower chamber, have had trouble unifying behind House Speaker John Boehner. Ultra-conservative Tea Party members are reluctant to support anything that doesn't include drastic setbacks to Obamacare.

Senate Majority Whip Dick Durbin said a deal was "close" Tuesday night, and said that members of Congress would have to act quickly to pass it before Thursday's debt ceiling deadline. "If they want to drag their feet, use every objection they can, it’s going to take a few days," he said.

Though a final version has yet to be released, Politico reports that the legislation is "a $986 billion government funding bill [that] would reopen federal agencies until Jan. 15, and the debt ceiling would be lifted until Feb. 7." After accepting this deal, Congress would have about two months to come up with a more permanent funding proposal. A Republican proposal to strip the Federal Treasury of its ability to use so-called "extraordinary measures" to pay bills is apparently not part of the deal.

In the House, however, Republicans continue to splinter. Jake Sherman and John Bresnahan report that there are at least three distinct factions within the party:

Republicans who didn’t want to slash government health care contributions for Capitol Hill aides, members who thought repealing the medical device tax was a giveaway to corporate America and conservatives, who thought Republican leaders were too soft on Obamacare.

A House GOP funding bill fell through Tuesday, after the factions were unable to unite behind it. Any Senate proposal that lands in the House will have to secure at least some Republican votes to pass, but the possibilities are dwindling.

Meanwhile, the shutdown is threatening to take another casualty: the Marine Corps Marathon. Organizers have set a deadline of Oct. 19 for the government to reopen, at which point they will tell runners that the marathon — which winds past many DC landmarks and monuments — will be cancelled. The Marine Corps Marathon is among the most popular, and fills up hours after signups open.