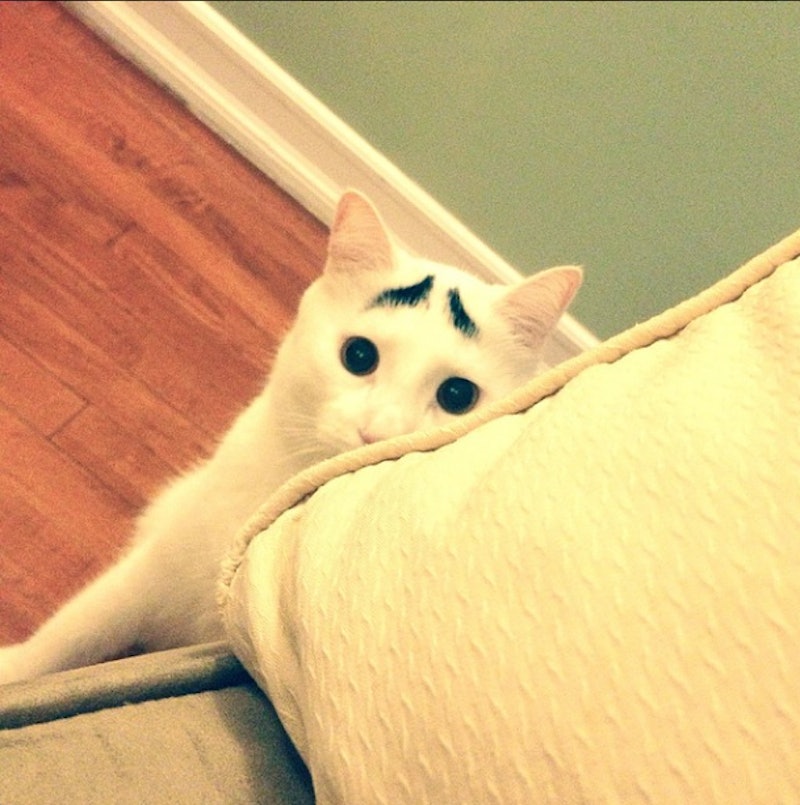 Judging from the look on his face, nobody is as surprised about his status as an official Internet Cat as Sam, star of the popular Instagram SamHasEyebrows. When NYC resident Amanda Collado created an Instagram account for her cat back in 2012, she probably had no idea that it would grow to have more than 155,000 followers, but less than three years later, that's exactly what happened, Today reports. Like most other Internet Cats, much of his success is due to a distinguishing feature that makes him so cute — in this case, Sam sports some serious character actor eyebrows. Well, kind of. Technically they're just black facial markings, but the effect gives Sam a perpetual concerned look that's earned him comparisons to all sorts of heavily-eyebrowed actors like Colin Farrell and Groucho Marx. Once you see a side-by-side picture, it's a pretty apt comparison. Sam's Instagram page is largely devoted to pictures of the cat napping, playing in boxes, dressing up in feather boas, and generally living the life I've always dreamed of having. He even got a mention in the New York Post earlier this week, meaning that a cat is already more successful than half of my generation But he's so darn adorable that it's impossible to begrudge him his success.

Just look at his faaaace. I can't even handle it.

Oh wow, how did that get there?

More like this
Why Everyone Is "Soft Tagging" Friends On Instagram Right Now
By Alexis Morillo
Why TikTok Is Flooded With Controversial Videos About "Pick Me Girls"
By Courtney Young
This TikTok Song About An Unrequited Romance Has FYPs In Shambles
By Emma Carey
19 Latinx Therapists & Mental Health Experts To Follow On Instagram
By Kaitlyn Wylde, Naydeline Mejia and Lexi Inks
Get Even More From Bustle — Sign Up For The Newsletter