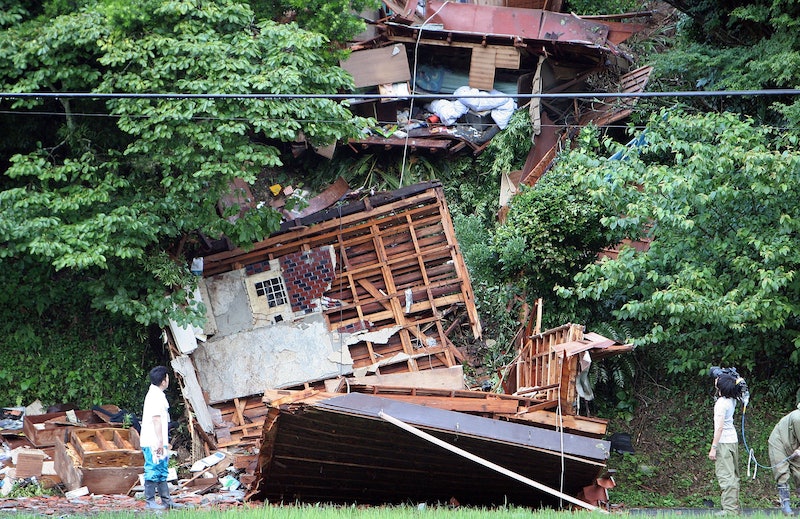 A typhoon rocked Japan on Wednesday, killing at least 17 people and causing massive damage but mostly avoiding the Fukushima nuclear power plant. Tycoon Wipha — described as a once-in-a-decade occurrence — forced the evacuation of 20,000 people in the island nation. The storm hit the Island of Izu Oshima hardest, destroying dozens of homes and burying at least 16 people there in mudslides. "People on this island are somewhat used to heavy rainstorms, but this typhoon was beyond our imagination," a sushi chef on the island told USA Today.

Wipha hit during the morning rush hour, forcing hurricane-strength winds on commuters. On the main Island, Honshu, the only confirmed death is a woman who fell into a river, though there are reports of two missing boys and one other person. Overall, about 50 people are currently unaccounted for.

"I heard a crackling sound and then the trees on the hillside all fell over," a woman on the hardest-hit Island told a television channel. The storm was downgraded to a tropical disaster later in the day but still managed to ground hundreds of flights.

At the Fukushima power plant, precautions were taken to avoid as much damage as possible. The plant cancelled offshore work ahead of the storm. It has been having trouble ever since a 2011 earthquake and tycoon damaged one of its reactors. Earlier in October, the plant suffered another leak and issued an apology, stating that, "We would like to apologize that we have to announce that we've had another leak in our tanks today...This is partly because we've had to fill our tanks to the brim in order to deal with the difficult management of rain water overflow."

The crisis at Fukushima is the worst since the Chernobyl disaster in 1986.