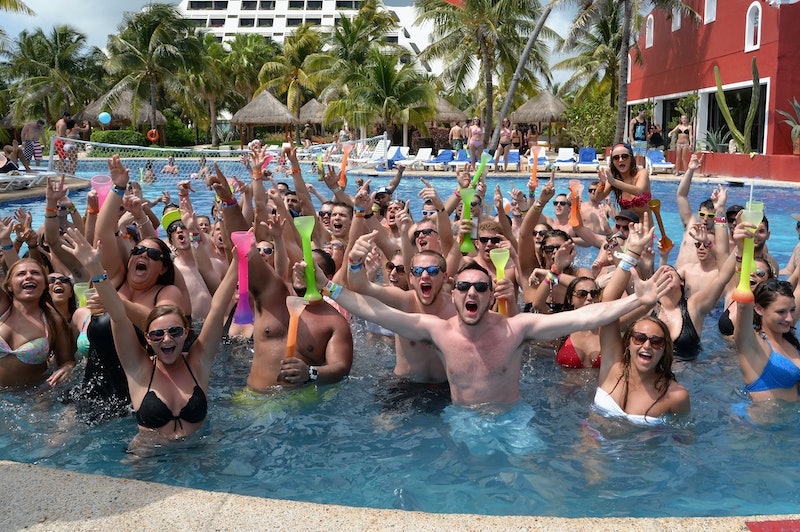 Oh wow, does this story make me want to bash my head against a wall. A man is using GoFundMe to raise money for a spring break trip to Miami in an attempt to "save" his relationship with his girlfriend, but this gesture isn’t as romantic as you think.

As Cosmo reports, the boyfriend in question, Azel Prather, Jr., is a 25-year-old resident of Glendarden, Maryland. Prather was worried his relationship with his girlfriend wouldn't last if he didn't join her on a spring break trip she was planning to take with a group of friends to Miami — you know how rowdy these kinds of vacations can get (eye roll) — so in a desperate scramble, Prather created a GoFundMe page entitled “Save My Relationship.” The plan, I guess, was to pull on the heartstrings of commiserating strangers who also know what it's like to not be by your significant other's side every waking hour of every day, and raise the $300 he needed for a flight. The crazy part? He actually met his goal.

So, why, exactly did he think that his plight was worthy of a stranger’s cash? Why don't we just let Prather speak for himself, hm? According to the page:

As you know, spring break is fastly [sic] approaching and my youngin (pictured above) and her friends are going to Miami. If you know anything about Miami, you know that she shouldn't go without a chaperone. I need to get there to be with her and share this joyous time but my funds have been exhausted... If you can find it in your heart to donate ANYTHING to help save my relationship I would greatly appreciate it.

Um, excuse me, Prather? Your girlfriend “shouldn’t go without a chaperone?” This is spring break, not a middle school field trip — she’ll survive. Any suggestion that a woman needs to be under supervision while she's away is condescending, rude, and incredibly sexist. Furthermore, if you think that your girlfriend will cheat on you unless you are with her at all times, you probably don’t have a solid relationship to begin with. Sounds to me like the bigger issue here is lack of trust — not a lack of vacation funds.

Prather told The Washington Post that his girlfriend’s social media posts were making him uneasy, and that her photos were receiving too many likes for his comfort. He also shared one of her Instagram photos from Miami on his GoFundMe campaign page with the caption “She clearly needs me… I can tell the Miami sun is doing exactly what I thought it would do... Help.”

So far, 24 people have stepped up to help Prather raise the $300 needed for a Miami-bound flight. You may be asking yourself, but what about the other expenses that come with a vacation? Prather has got that covered. He says on his campaign page, “I will be staying wherever she lays her head, eating whatever she eats, and overseeing all parties and fun activitiy [sic] for the duration of the trip.” How resourceful of him… imposing on your girlfriend is certainly one way to save money while keeping the romance alive.

Crowdfunding: it can be used for so many great things, but also for some really mind-blowing causes. Here’s hoping that once Prather arrives in Miami, his girlfriend dumps him for being such a possessive dimwit.

More like this
10 Ways To Be More Empathetic To Your Partner
By Raven Ishak and Lexi Inks
Think Your Partner Is Cheating? These Tarot Cards May Confirm Your Suspicions
By Kristine Fellizar
You Can Stay At The 'Hocus Pocus' House On Airbnb
By Alexis Morillo
Craving The Beach? Here's Your Guide To A Solo Vacation In Turks & Caicos
By Alexis Morillo
Get Even More From Bustle — Sign Up For The Newsletter