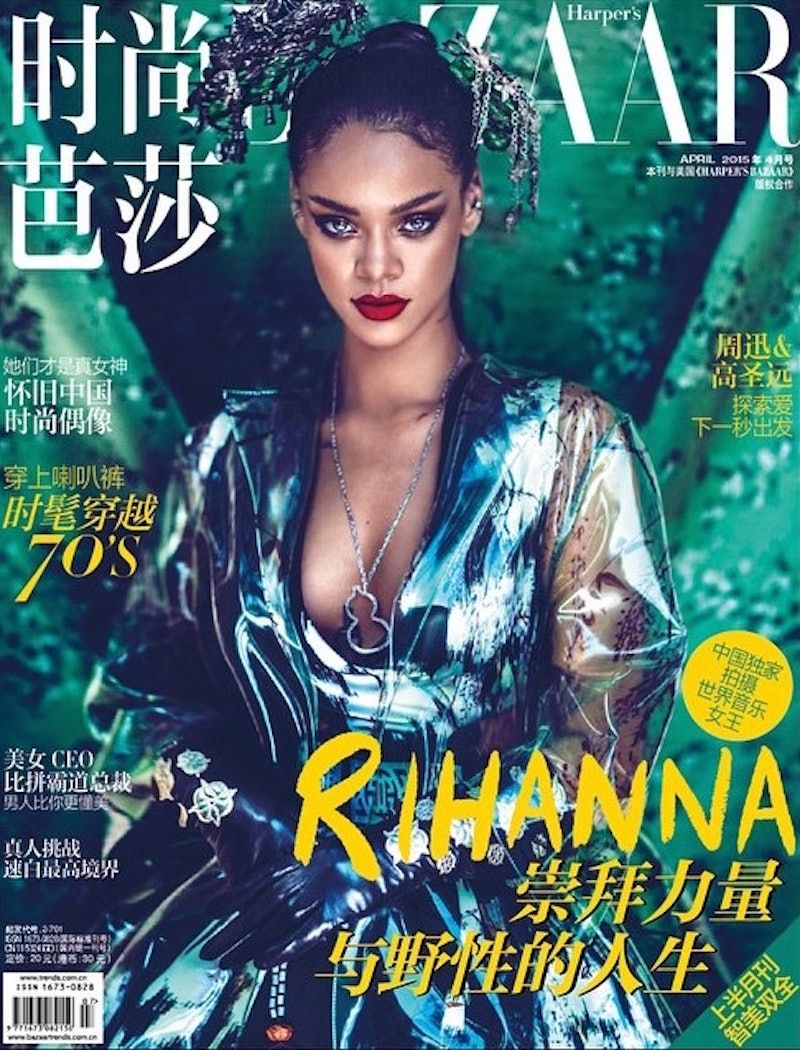 If global domination was Rihanna’s new year’s resolution for 2015, she’s been doing well for herself. She released a track “FourFiveSeconds” with Kanye West and Paul McCartney, and it turns out that the trio will be touring together later this year. She’s got a new animated movie Home coming out at the end of March. All the while, she's been making one bold fashion choice after the next, from her bubble gum pink princess dress at the Grammys to the batman mask she wore to Moschino's show at Paris Fashion Week. Since January, she has appeared on the covers of i-D’s music issue, AnOther Magazine, Harper’s Bazaar, W Korea’s tenth anniversary issue, and now, Harper’s Bazaar China. Twice.

The images for these newest covers and the accompanying spread for Harper's Bazaar China's April 2015 issue are visually stunning. The colors are rich, and Rihanna looks flawless. But the theme of the shoot, photographed by Chen Man, a Chinese fashion photographer, seems to be a little problematic, and the spread is confusing. It evokes a kind of “something Asian” feel, a strange mixing and matching of different visual cues from different cultures to create this exotic wonderland through which Rihanna can float, decked out in gorgeously sumptuous couture outfits by Viktor & Rolf and Dior. But it’s gorgeous, and appears in a Chinese publication, so is it really that bad?

The confusion starts with the combination of Rihanna's henna-inspired tattoos, which are traditionally associated with Indian and South Asian cultures, and more East Asian references in the outfits and sets. It turns out Rihanna had those patterns inked on her hand in 2013, so they weren't for this shoot in particular, and were probably not taken into account by stylists when coming up with the concept. But that permanent body art paired with sartorial references from East Asian cultures makes the overall look a bit of an orientalist mess that doesn't seem to get that India is not China... or East Asia.

The East Asian references are, in and of themselves, a little strange. Rihanna’s hairstyle in this shoot, with blunt, slicked-down bangs and a bun, is reminiscent of a geisha’s traditional up-do. Although she's not wearing a kimono, the image of Rihanna standing on a wooden foot bridge holding a paper umbrella further invites the comparison. There are also some shots where she is holding a fan, gazing toward the ground, signifying submissiveness. These demure shots are juxtaposed with ones in which she stares directly at the viewer, with dramatic makeup and sexy clothing. The strong smokey cat eye and claws-for-nails give Rihanna a dragon lady-vibe when she's staring directly at the camera in a cut-out form-fitting red dress. The shoot seems to pull from either end of the spectrum of stereotypes of Asian women: exotic dominatrix or submissive concubine.

The confusing looks are further complicated by their presentation in an Asian publication. This highly stylized shoot is definitely dramatic and exotic (did you notice that fake fog in one of the pictures? Nothing says "drama" quite like some good fake fog), but that’s part of the problem. The reaction from western media has been overwhelmingly positive, with blogger Perez Hilton raving, “ZOMG. She. Looks. So. FIERCE!!” So it seems that the fact these vaguely orientalist images are appearing in an Asian publication gives them a free pass, and excuses them from critical thought from American and European commentators.

Despite the mixed imagery and confusing messages to western media, this cover story is probably a good thing, especially in Asian markets. Chinese culture (and East Asian cultures, more broadly) isn’t known for being welcoming of foreigners, especially those with a darker skin tone. This stereotype has a few different roots.

First is that China is an overwhelmingly homogenous country, and although there are many different ethnic groups, about 92 percent of those living in mainland China are Han Chinese. This means that there's not a lot of exposure to people of different races within China. This unfamiliarity is compounded by the fact that back in the day, Chinese with darker skin were lower class peasants or farmers because they worked in the sun all day, a bias that has continued to this day. There are some horror stories of people of African descent facing overt and blatant discrimination in China, and despite some criticism from the west, there's no real indication that this attitude will change soon.

Overall, the Chinese attitude toward "others" is less than favorable, and this prejudice is why Rihanna's appearance on the cover of a major Chinese fashion magazine is important. Rihanna has been a trailblazer for women of color in fashion, most recently — and perhaps notably — becoming the first black spokeswoman for Dior in the company’s history. These cover images and accompanying shoot in Harper’s Bazaar China can be considered to be part of that same work of diversifying fashion on an even bigger global stage.

For a western audience, the pictures from Rihanna's Bazaar China spread are somewhat problematic and confusing and raise serious questions about how East Asian culture is perceived by the media. But the fact that Rihanna, a black woman, is on the cover of a Chinese fashion magazine has an entirely different significance for an Asian audience. If it takes dressing Rihanna in oriental costumes on weird Crouching Tiger, Hidden Dragon-style sets to start to ease some of the racial tensions in Chinese culture against foreigners, especially those with darker skin tones, then maybe it's OK in the long run.