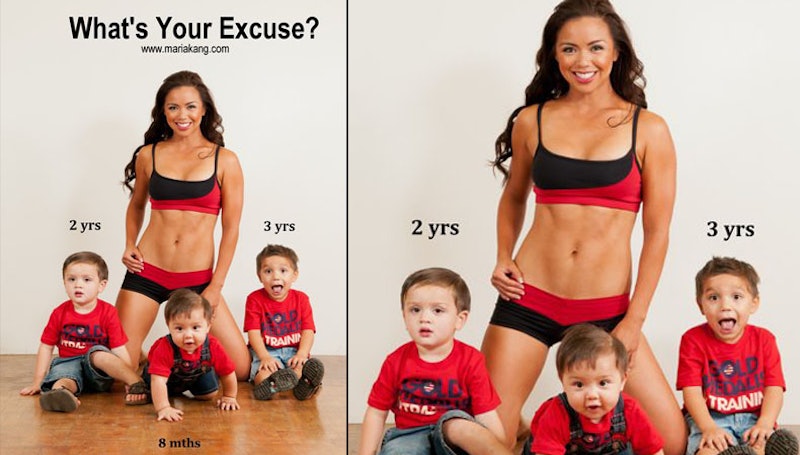 Writer, mother and fitness blogger Maria Kang caused an online firestorm recently because of a family photo she posted on Facebook. Like many family photos, it featured Kang and her three boys in color-coordinated attire. But unlike in your average family pic, Kang beams at us while wearing a sports bra and booty shorts. It was posted along with her children's ages and the taunting caption: "What's your excuse?"

The caption is obviously the clincher, what pushes this from pride or simple bragging into fat-shaming Mean Girl territory (sadly typical of so-called Fitspiration). The post has garnered more than 21,000 Facebook comments and 15,000 shares.

Though Kang originally posted the photo last year, it only started going viral in the past few weeks (the Internet! so weird). The influx of comments prompted Kang to post an apology ... sort of. It's really more of a quintessential #SorryNotSorry:

I've been getting an influx of new followers, emails and comments (on my profile pic) recently. Some saying I'm a bully, I'm fat-shaming and I need to apologize for the hurt I've caused women. I get it. SO here's my First and Final Apology: I'm sorry you took an image and resonated with it in such a negative way. I won't go into details that I struggled with my genetics, had an eating disorder, work full time owning two business', have no nanny, am not naturally skinny and do not work as a personal trainer. I won't even mention how I didn't give into cravings for ice cream, french fries or chocolate while pregnant or use my growing belly as an excuse to be inactive. What I WILL say is this. What you interpret is not MY fault. It's Yours. The first step in owning your life, your body and your destiny is to OWN the thoughts that come out of your own head. I didn't create them. You created them. So if you want to continue 'hating' this image, get used to hating many other things for the rest of your life. You can either blame, complain or obtain a new level of thought by challenging the negative words that come out of your own brain. With that said, obesity and those who struggle with health-related diseases is literally a 'bigger' issue than this photo. Maybe it's time we stop tip-toeing around people's feelings and get to the point. So What's Your Excuse?

In an interview with Yahoo! Shine, Kang admitted it was more of a "non-apology." It's like that stereotypical high-school girl who thinks everyone hates her because they're jealous when really it's because she's just insufferable. This is turning out to be a very nihilistic story: Woman causes uproar, learns nothing. Though I guess it's kind of refreshing to see someone refuse to backpedal, as we typically expect in these situations. I like when people are honest online, even if it's just to show us that they are honestly pretty awful/clueless.

In response to the attention, Kang created a Frequently Asked Questions section on her website. It includes things like:

Are you in your twenties? I definitely agree that being young assists in pregnancy weight loss, but while I look like I could be in my mid-twenties, I gave birth when I was 29, 30 and 31.

How did you lose weight? Losing weight is a science. It’s a combination of exercise, diet, rest and prayer (for me). Prayer is about affirming the person you would like to become and asking for a higher source to give you strength in your journey.

Regardless of how sympathetic or not Kang comes across, it does highlight something we see again and again in the media: The expectation that any time a mother carves out time for herself it must be at the expense of her kids. Kang critics included some who called her a bad mom because she was spending time away from her kids to exercise.

I’m not missing anything when they’re sleeping. I’m also not missing anything when I’m taking them to the park and performing lunges, burpees or jumping rope while watching them play. (yes, incorporating fitness is really that simple) I’m not angry at these moms who choose to use this ‘excuse’ and condemn me becomes moms have a tendency to be self-sacrificing. There’s a lot of guilt in doing things for yourself when you become a mom, I know because I also go through it!

But I know when I’m the best mom to my children – and that’s usually when I’m able to take care of myself also. Having been a child of an overweight mother was a very tough experience. I dedicated my profession towards helping others because I didn’t want others to suffer from the pain poor health creates.