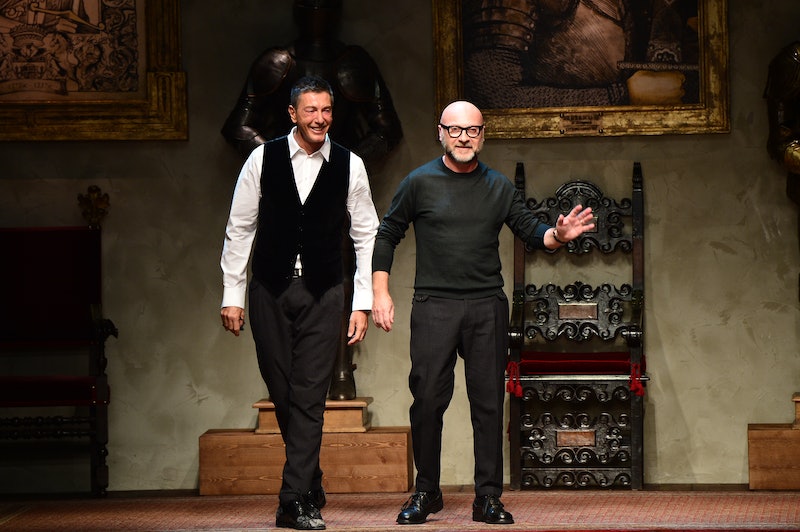 Dolce & Gabbana are in damage control mode. Sort of. After Elton John put Dolce & Gabbana on blast over comments the Italian design duo made about In Vitro Fertilization, the pair issued a statement that doesn't really apologize to the British singer, who has two children born from IVF with husband David Furnish, or anyone who has used this method to conceive. It's basically a short, sweet, and apology-free statement addressing the matter before moving right along.

In case you missed the Internet melee, Sir Elton said he would be boycotting all Domenico Dolce and Stefano Gabbana designs, since he was insulted after the designers criticized same-sex parents, reportedly calling IVF children "chemical babies" and referring to the uteruses as "rented" in an interview for Italian magazine/website Panorama.

Dolce reportedly said, "You are born and you have a father and a mother. Or at least it should be like this, that's why I am not convinced by chemical children, synthetic babies, wombs for rent."

Yikes. That's pretty harsh. While Dolce said it, D&G as a company is dealing with the fallout.

It is worth mentioning that pregnant Italian model Bianca Balti walked in the D&G runway show in Milan recently. Not to mention that the models were carrying children. So it would seem, at least on a surface level, that the brand is certainly supportive of traditional motherhood and families and is not anti-child.

But the pair, who were once romantically involved but remain successful business partners despite the end of the personal relationship, did a little backpedalling after John went nuts, stating that their comments were simply their own viewpoints and not an indictment of others and their choices.

The Dolce & Gabbana statement, as published by Reuters, is as follows.

"We believe firmly in democracy and we think freedom of expression is essential for that. We talked about our way of looking at the world, but it was not our intention to express a judgment [sic] on other people's choices. We believe in freedom and love."

While that statement is nice and tidy, the original comments that Dolce made were… not. There has been no apology for the words, either. This controversy might make other celebs who employed a surrogate parent, like Nicole Kidman, follow John's lead with a boycott.

If anything, the statement should have said something in the way of "I'm sorry" for those who were indeed offended. It's quite surprising that the designers, who are both gay and work in what should be an open-minded and embrace-all-types field, hold such a controversial point of view. I expect this to continue to be a hot topic in fashion and celeb fashion through the week.