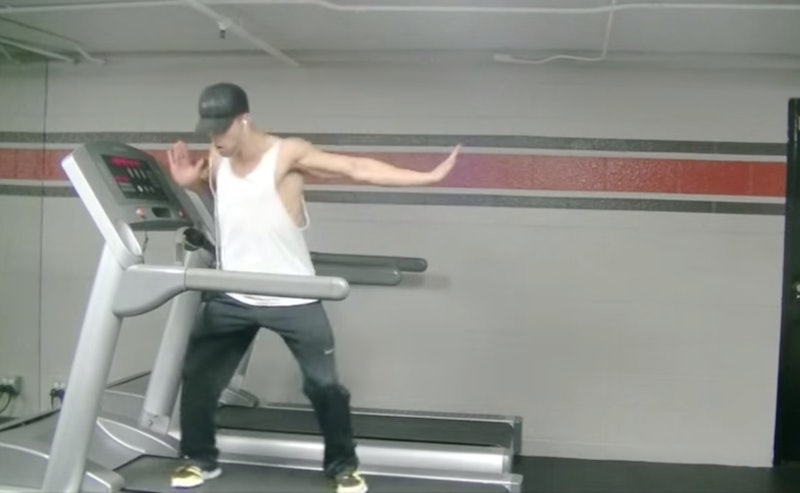 If uptown hasn't fully funked you up yet, then it's about to. I've seen a lot of movers and groovers strutting their stuff on YouTube since Bruno Mars' new single hit the air waves, but none quite as ambitious as this guy who dances on a treadmill as a cardio workout. Carson Dean has taken both the song and cardiovascular exercise to the next level, and dare I say, makes going to the gym look almost...fun? Almost.

Dean happens to be a performer in Los Angeles, and judging by the size of his biceps, is no stranger to gym equipment. I've spent my entire life telling people I hate treadmills so I can sound like a snobby outside-only runner, but the truth is, I can't so much as reach for a water bottle without falling over, so I'm doubly impressed by this man's antics. If he wants to lead this class in a gym then I am a hundred percent all for it. (To be clear, that's not because I would be participating. I would be in the back of the room, watching with my jaw unhinged in awe.)

This guy has got some seriously bonkers treadmill skilllz. To borrow a quote from Bruno Mars that I'm sure has been abused more than its fair share since this video was released, "Don't believe me, just watch."

Here is about the moment you'll get fully funked.

TOO SMOOTH FOR THIS WORLD.

Here's the full, uncut version of his dance. I shouldn't have to warn you not to try this at home, so I won't. Also because I'm a bit of a sadist and the idea people falling on their asses amuses me.

Oh, what's that? You want a close up of this handsome specimen? GLAD YOU ASKED.

I also found this. I have no idea WTF is happening here but I'm not going to complain.

I don't know about everybody else but I personally feel a WHOLE lot better about letting Monday happen now.

More like this
This Psychological Effect Might Be Keeping You From Hitting Your Goals
By Lexi Inks
Twitter Is Saying The Same Thing About Roger Federer’s Retirement From Tennis
By El Hunt
Everything To Know About Taylor Swift’s 10th Studio Album, 'Midnights'
By Grace Wehniainen and Jake Viswanath
Twitter Is Freaking Out Over Rihanna’s 2023 Super Bowl Halftime Show Announcement
By Stephanie Topacio Long
Get Even More From Bustle — Sign Up For The Newsletter