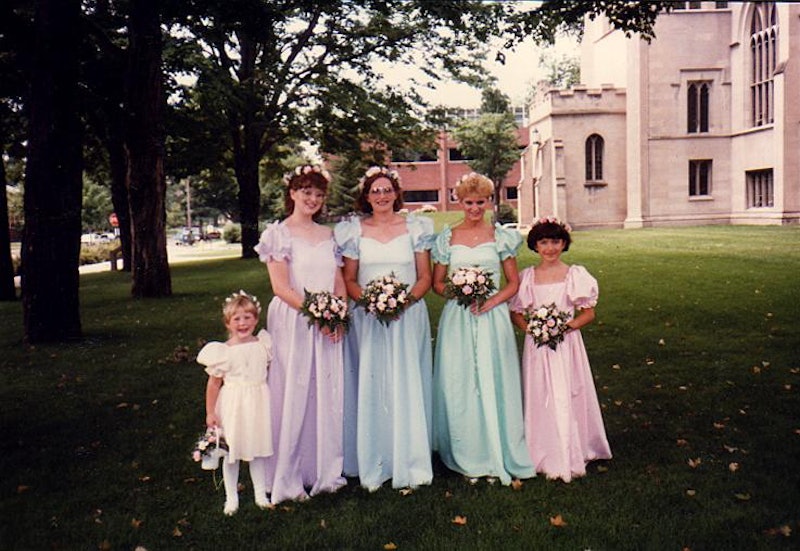 Believe it or not, the position of “bridesmaid” was ­not invented with the intention of making you wear an ugly dress while forking over huge amounts of cash for a bachelorette party in Vegas. According to Jen Doll, author of Save the Date: The Occasional Mortifications of a Serial Wedding Guest, in an article for Mental Floss, bridesmaids were originally simply a set of witnesses: Ancient Roman law required that at least ten people witness a wedding ceremony for it to be valid, and thus the wedding party was born. The stereotype that bridesmaids are supposed to wear terrible dresses in order to highlight the beauty of the bride is also a relatively new development; back in the old days, bridesmaids were actually supposed to dress similarly to the bride in order to confuse any evil spirits that happened to be lurking around on the wedding day. The more you know, right?

In recent decades, these previously simple requirements of the bridesmaid have become distorted to include an ever-increasing array of expenses and responsibilities, and being a bridesmaid is now a sometimes lovely, but more often thankless, honor. Adding to the angst of unflattering dresses and demanding brides is the fact that any foibles you happen to commit on the day of the wedding are likely to be recorded—and then made into hilarious but embarrassing video compilations—like this one! In the video below, BuzzFeedYellow, using clips supplied by America’s Funniest Home Videos (which is still a thing, apparently), 25 unlucky ‘maids who happened to be doing something ridiculous when the cameras were rolling. We can laugh because we’ve all been there, in one form or another.

Indignities suffered by these ill-fated bridesmaids include:

(Side note: apparently purposeful flashing at weddings is a thing now ?)

And… whatever is going on here:

Watch the full video below and be thankful it’s not you in the frilly dress.

More like this
Androgynous Formal Wear That Will Make You Feel *So* Fancy
By Megan Lasher
Bustle Newsletter: September 23, 2022
By Stephanie Talmadge
TikTok's Butter Board Might Be The New Cheese Plate
By Emma Carey
8 Completely Unserious Tips To Make Your Cuffing Season A Success
By Ginny Hogan
Get Even More From Bustle — Sign Up For The Newsletter