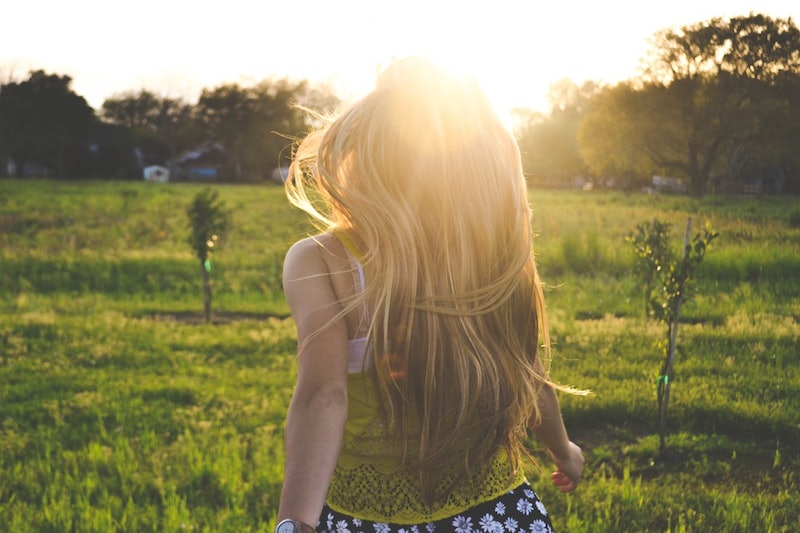 It's hard to say definitively what you should know about yourself by the time you're 30 years old, because the point of life is that we're always learning and evolving. But there are certain elements of your self that you should have a strong grasp on after three decades on earth. While those things might be subject to change, chances are, the core of what makes you uniquely you has been largely determined by this point. And one of the most rewarding things about getting older, of course, is self-awareness. Because as much as everyone talks (and writes, and sings, and...) about how thrilling and rewarding it is to spend your 20s "finding yourself", the search can be exhausting. What really feels good is what comes after you've found yourself—after all, you were looking for a reason, right?

I was recently speaking to a girl who was freaking out about turning 20 (lol), and I told her that getting older is good, because you learn more things about yourself. She stopped and contemplated for a second, and her face lit up. "Yeah!" she said, "Like, now I know that I look better when I shade in my eyebrows but when I was younger I didn't!" It was a giant face-palm moment; personal beauty was the least of what I had in mind, but hey, baby steps. Another decade, and maybe she'd understand that learning about yourself means finding strength in your convictions and beliefs, and letting go of a lot of convictions and beliefs. And while the process of figuring out who you are, what you want, and what you don't want is a lifelong one, here are six things you should probably know about yourself by the time you turn 30:

1. How you want to be treated by others

By the time you reach 30, you probably have a good grasp, if not a perfectly-formed one, of what you will and will not put up with from people, whether they're family, friends, lovers, or perfect strangers. By now, you'll have been hurt, let down, or surprised by someone at some point, so you'll know exactly what sort of treatment you won't tolerate. It's one of the most valuable tools you'll have in your belt, especially when it comes to friendships and romantic relationships. For instance, certain behaviors I put up with from friends at twenty, I wouldn't even dream of entertaining now, like backstabbing and incessant bitching, for instance. Enlightened with experience, you'll be able to choose much better people to surround yourself with, which, in the long run, will make you much happier.

2. What's non-negotiable to you

Compromise is important in life. Things don't always go your way and you have to be prepared and willing to roll with the punches sometimes. But as you get older, you'll also learn that it's okay to have demands. You don't have to bend on everything; Part of growing up is choosing your battles and that means knowing where you need to compromise and where you will absolutely not negotiate. By 30, you should have a good idea of what your deal breakers are, and what your goals are, in most areas of your life. I will not compromise on reliability in other people, for instance. You either be reliable or you get out of my life. "Fake leather" is also a deal breaker for me. It's got to be real leather or I'm not having it. So there you go: Getting older has a lot to do with knowing what you do and don't want.

3. How you want to feel about yourself

Look, I'm not going to pretend turning 30 is some magical thing that fixes you or solves all your problems or floods you with some kind of otherworldly wisdom. You wont instantly be cured of all your insecurities. But what you will start to acknowledge is how you WANT to feel about yourself. When you're younger, you can sometimes fall into the trap of accepting feeling bad about yourself as part of who you are, and a lot of people feel like there's some honor in wearing that like a badge. When you start to get a little bit more life experience, you realize that there's no glory in insecurities, and that you don't want to have negative feelings about yourself. Once you acknowledge that you'd like to love yourself more, you'll start working towards that in a way you might not have devoted conscious effort to before.

4. That sometimes you're wrong

The official theme song of being under 25 is "Can't Tell Me Nothing." Because you can't tell a young person ANYTHING. And that's okay. It's one of the endearing, whimsical things about being young: You genuinely believe that you are RIGHT. By the time you get to 30, you should have realized and accepted that sometimes you are WRONG. That you have been wrong in the past, that you might currently be wrong, and that in the future you may also be wrong again. I mean, sometimes you're right, but reaching acceptance with, and taking responsibility for the times you're wrong is just as important as being right.

5. That you still have a lot to learn

You should know what your shortcomings are by 30, and thus, you should know the areas of yourself that could use some lesson-learning. Maybe you have a hot temper; Maybe you don't stand up for yourself enough. Whatever it is that you need to work on, you'll have a grasp on it by 30. Maybe there will be major problems that you haven't even broken ground on fixing, but hell, even knowing where to start digging is a major accomplishment. When you were younger, you might have been belligerent about these things, in that martyr-ish way that early-20-somethings declare: "This is me! I will suffer for me!" As you get to 30, you'll realize you don't have to do that, and it's okay to have strange personality traits, or gaps in your knowledge or skill sets. It's okay! Life is a constant learning curve, and you never stop your journey in personal growth.

6. That you don't actually know anything at all

My favorite thing about getting older is accepting that actually, I don't know anything at all. I mean, nothing. Life is so unknowable and everything is completely subjective. And in my opinion, that's the most comforting thing about getting older. The crusade to shout the loudest and be the biggest winds down as you realize everything just is, and there's not much you can do about it, except try to find some happiness in the middle of it all. Because you're just another big, dumb Jon Snow plodding about bumping into six billion other Jon Snows, not one of us with a clue what we're doing or why, or what the hell is going on and what any of it is for.

More like this
The Spiritual Meaning Of Angel Number 000, Explained
By Kristine Fellizar
Meghan Markle Delivers Empowering Message About Being Yourself
By Sophie McEvoy
10 Stranger Things-Inspired Halloween Costumes For True Fans
By Emma Carey
Bobby Berk Explains How To Maximize Every Inch Of Your Bedroom Storage
By Marilyn La Jeunesse
Get Even More From Bustle — Sign Up For The Newsletter